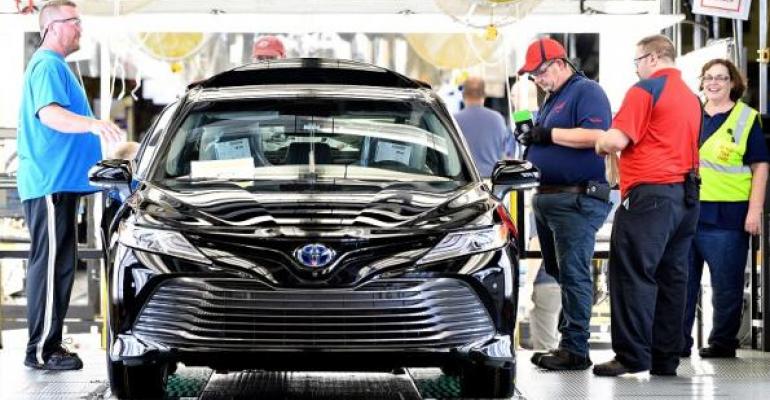 Other news from Toyota&rsquo;s NADA media roundtable: Tariffs on aluminum and steel are bad; free trade has been great for American jobs; autonomous-vehicle research must not be deterred; and Lexus is thrilled with its &ldquo;Black Panther&rdquo; tie-in.&nbsp;

LAS VEGAS – The Toyota New Global Architecture, which debuted on the ’18 Camry and ultimately will underpin all the brand’s front-wheel-drive cars, also will be adapted for larger body-on-frame trucks, executives here confirm, though they decline to say precisely when that will happen.

Jim Lentz, CEO of Toyota Motor North America, tells journalists the next generation of the modular, scalable TNGA is in the planning stages, and that “there is a truck platform” to be derived from it.

Camry production began last June at Toyota’s Georgetown, KY, assembly plant, where the automaker spent $1.33 billion to retool for the new architecture, which spawns the all-new Avalon sedan in May, followed by the Lexus ES sedan and others in the future.

Speaking at a journalist roundtable on the sidelines of this past weekend’s National Automobile Dealers Assn. convention and expo here, Lentz says whatever is learned during launch of the Camry, Avalon and ES will inform changes to the next iteration of TNGA.

“Camry is a stake in the ground with the new platform,” Bob Carter, executive vice president-sales and Toyota Motor North America, says at the roundtable. “You will see this design language, this platform, these powertrains, everything going forward in our full model changes.”

Other topics explored during the roundtable:

“So let’s say on average it’s a $200 (price) increase per vehicle,” he says. “That’s a $3.4 billion tax on U.S. consumers. Tariffs are taxes. The cost will be borne by the suppliers. They will give us increase cost on parts, and we will try as automakers to move that cost on to consumers.”

Toyota exports 140,000 vehicles annually from the U.S., and Lentz says anything that increases cost to North American-built vehicles “makes us less competitive.”

The automaker has two plants producing Highlander CUVs – in China and in Princeton, IN. The U.S. plant exports to Australia, New Zealand, Russia and other markets.

“If my costs get driven up due to tariffs and whatever else, even the distributor in New Zealand will say, ‘Jim, your costs are getting awfully high. I think I want to change my sourcing and get my product from China.’ That’s not good for the North American industry, and it’s not good for Toyota. We are firm believers that tariffs are not good for the industry.”

Toyota had two U.S. plants when NAFTA took effect and has added eight more since then. A $1.6 billion joint-venture plant being built with Mazda in Alabama will be the ninth.

“Industrywide, 14 new plants have come into the U.S.” since NAFTA, Lentz says. “Yes, plants have also been put into Mexico and Canada, but the majority of plants have been in the U.S. In our case, over half the expansion of U.S. plants has been Toyota plants.”

“It’s the largest superhero film ever and the fifth largest movie of all time,” Jeff Bracken, group vice president and general manager-Lexus North America, says of the action movie, which prominently features both the LS sedan and LC coupe in chase scenes.

When asked if Lexus has an option for the sequel, Bracken says with a grin: “We have nothing to talk about today, but that’s a really good question.”

“This is a new evolving technology, and there will be highs and lows,” he says. “Obviously, this is one of the lows as you bring out new technology.” The automaker temporarily has suspended testing of its Chauffeur autonomous-vehicle technology until additional information is released about the Uber accident.

“Loss of life in the space program or autonomous vehicles, it causes pause until people really understand what happened and what corrective action can take place so it doesn’t happen again,” Lentz says. “In the end, (self-driving cars) will save tens of thousands of lives.”