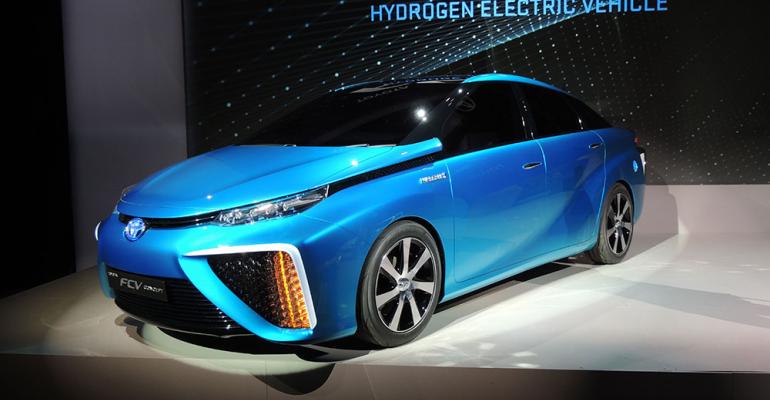 Toyota says its fuel-cell car carries a tank with 11 lbs. (5 kg) of compressed hydrogen that can keep the wheels spinning for 300 miles (483 km). Recharging at hydrogen stations can be completed within five minutes.

LAS VEGAS – As Toyota prepares to launch its first fuel-cell vehicle in California in 2015, the automaker is busy helping build the infrastructure for simple refueling.

“I really do believe this has the potential of changing the car market over the next 20 to 30 years,” Bob Carter, senior vice president-automotive operations for Toyota Motor Sales U.S.A., tells WardsAuto here at the International Consumer Electronics Show.
“This car brings all the benefits of a battery-electric vehicle, such as zero emissions, but it doesn’t bring the baggage that EVs bring with them right now.”

The biggest piece of baggage for EVs today is range, which generally is limited to 100 miles (161 km).

Toyota says its fuel-cell car carries a tank with 11 lbs. (5 kg) of compressed hydrogen that can keep the wheels spinning for 300 miles (483 km). Recharging at hydrogen stations can be completed within five minutes, as opposed to several hours for BEVs.

Fuel cells have been on OEM drawing boards for many years, but costs have been prohibitive. Still, Carter is encouraged by the latest developments. “We’ve had a 95% reduction in cost vs. our initial prototypes.”

Toyota displayed two vehicles at this week’s CES, a fiberglass model painted brilliant blue and a camouflaged version in sheet metal that is one of three mules that have logged 1 million miles (1.6 million km) of test driving.

The 4-door front-wheel-drive cars likely will be displayed at the 2014 North American International Auto Show in Detroit. In production, the vehicle will share its underpinnings with a Lexus platform, Carter says. Total power output is rated at 134 hp (100 kW).

California has 10 stations in Los Angeles and the San Francisco Bay area where hydrogen is publicly available, and the state has approved spending an additional $200 million for 100 more stations focused in L.A. and San Francisco, as well as Orange County, San Diego and Silicon Valley.

By 2015, another 20 stations will be ready in these regions, followed by 20 more in 2016 and as many as 100 in 2024, Toyota says. University of California research finds the population density in these areas requires only 68 hydrogen stations.

“It’s based on the model that a customer wants to refuel within six minutes of where they live and work,” he says. “With these 68 stations, we can accommodate that geographic area” and supply enough fuel for a fleet of 10,000 vehicles.

If every car in California burned hydrogen, Carter says the entire fleet could be supported with 15% of the number of locations where gas is currently sold.

The state currently has 10,000 gasoline stations, which Carter considers over-saturated. “How many traffic lights do you stop at where three of four corners have a gas station?”

He says it’s too early to discuss pricing, but the plan is to offer the car both for lease and retail sale.

He knows the fuel-cell market will be slow to develop.

“But I remember distinctly, it was at the New York auto show in 1998, during the Prius launch. I remember all the criticism and people saying, ‘Who’s gonna buy that? Why would anyone pay for two powertrains in their cars?’ And look where we are. It feels reminiscent of that.”