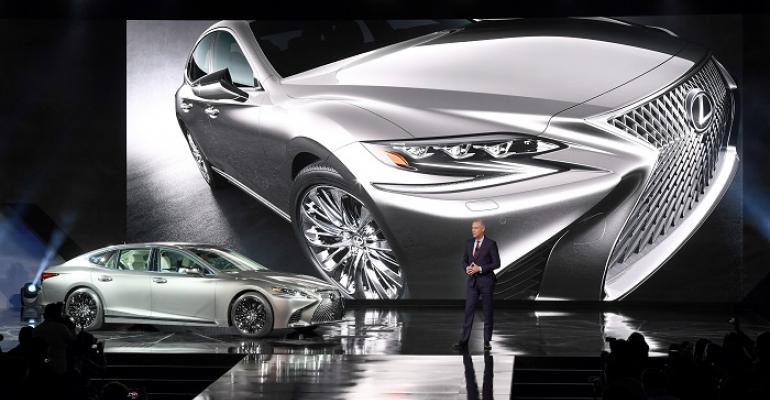 The increased amount of safety tech in the car is why it has more than 100 electronic control units, compared with 75 in the current LS, chief engineer Toshio Asahi says.

DETROIT – The new Lexus LS flagship sedan saw 4,000 engineers work on its development, double the number who worked on the outgoing generation of the car.

“We more than doubled the number of engineers compared to the previous model because of the increase of new and advanced safety technology,” Asahi says.

In the 11 years since the LS was fully redesigned, in-car technology has exploded, not only in terms of infotainment features, such as voice recognition and concierge systems, but also in terms of advanced safety technologies that use sensors and cameras to prevent crashes.

The increased amount of safety tech in the car is why it has more than 100 electronic control units, compared 75 in the current LS, Asahi says.

The new LS will feature Lexus’ Safety System+ and advanced safety packages, as well as a Lexus-first intuitive pedestrian detection with active steering within the lane. The system shows an image of a pedestrian in the car’s path on a color head-up display.

The advanced safety package includes a driver-attention monitor along with lane-keep assist and a pre-collision system with adaptive cruise control and front-crash avoidance technology.

The luxury sedan’s advanced chassis control is Lexus’ latest-generation system and integrates braking, steering, powertrain and suspension to “control basic longitudinal, lateral and vertical motion as well as yaw, roll and pitch.” Active stabilizer bars add dynamic handling while integrating front and rear steering. All these measures are to provide greater stability when the car is on split-friction surfaces such as dry pavement and ice.

The new LS took five years to develop, including two years for concept design and three years for engineering. Asahi’s team built two fullsize clay models and an estimated 500 prototypes, including an unspecified number for crash-testing.

The new LS uses more ultra-high-tensile steel than its predecessor to reduce weight and enhance body rigidity. The car also makes greater use of laser welding and adhesives for assembly of body panels.

Through a combination of greater use of aluminum and the ultra-high-tensile steel, coupled with improvements in the car’s body structure, Asahi says his development team cut more than 220 lbs. (100 kg) from old to new model.

The LS is the second model to be built on Toyota’s new GA-L (global architecture for luxury car) platform for rear-wheel-drive luxury cars. The first, the LC 500 sports coupe, goes on sale in May. GA-L will be the basis for all future RWD sedans in the Lexus lineup.

The LS, like the LC, will be equipped with a 10-speed automatic transmission from Aisin, with shift times promised to rival those of dual-clutch transmissions.

Lexus vehicles are known for their quiet cabins, and Asahi says the new model is 10% quieter. That was calculated while driving 62 mph (100 km/h). His team’s internal estimate puts the LS ahead of the Mercedes S-Class.

The new LS, on sale late this year, will continue to be assembled at Toyota’s Tahara plant in Aichi prefecture, which also builds Lexus IS and GS sedans and the GX SUV.

While the current model is available in standard and long-wheelbase variants, the LS 460 and LS 460 L, the new ’18 LS comes standard with a wheelbase exceeding that of the LS 460 L.

Asahi is mum on the topic of a new LS hybrid but, because the LC 500 will have a hybrid variant, “technically we have a hybrid system that could accommodate this car.”

Since launching the LS in 1989, Toyota has sold nearly 600,000 units in the U.S. alone. However, sales in recent years have slumped, as well-heeled luxury buyers embrace SUVs and CUVs or drop down into smaller, more nimble midsize-sport sedans.

The all-electric Tesla Model S also has had an impact on the traditional players in the upper- luxury- car segment. While Lexus sold 5,514 LS units last year, down 23% from 2015, Model S deliveries rose 5.6% with a segment-leading 26,605 units sold, WardsAuto data shows. Mercedes S-Class sales also fell last year, down 14.3%. BMW was more resilient; a new generation of the 7-Series helped sales jump 39.0% to 12,918.