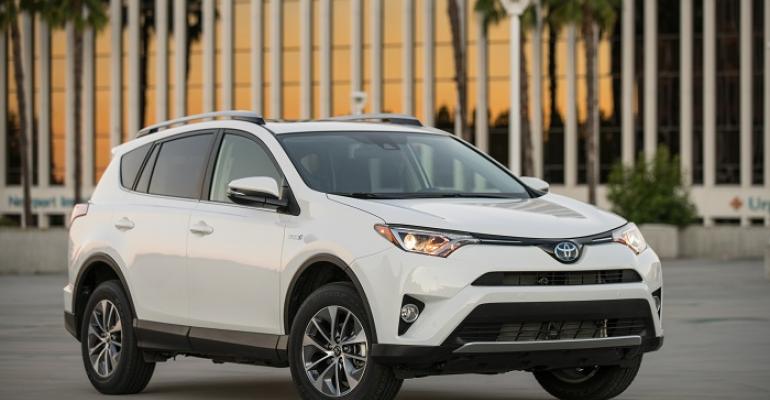 Toyota Aims to Knock CR-V Off Perch With Refreshed RAV4

The No.1 Japanese automaker has its sights set on selling 400,000 RAV4s in the U.S. in a couple of years, which would topple current volume of the rival Honda CUV.

That’s Toyota’s message to the No.2 Japanese automaker as it strives to make its RAV4 an even bigger success in the U.S.

Since the debut of the fourth-generation RAV4 three years ago, Toyota has seen sales of the midsize CUV climb sharply.

“Just two years ago we sold less than 200,000 RAV4s,” Cooper Ericksen, vice president-vehicle marketing and communications for Toyota Motor Sales U.S.A., tells media here during a ’16 RAV4 preview. “This year we’re on track to sell over 300,000.”

But the automaker isn’t satisfied with that figure.

“With a new product in a segment as hot as it is, frankly in the next couple of years we expect to sell around 400,000 units and we’re going to push for segment leadership (by then),” he says.

The CR-V has been the No.1 selling model in WardsAuto’s Middle CUV segment since 2012. Prior to 2011, when it was overtaken by the Ford Escape, the CR-V had been on top for five years.

Ericksen believes given the changes made to the RAV4 for ’16, which include the addition of a new sport-focused SE grade and two new hybrid grades, the XLE and Limited it is ahead of the competition.

No automaker has retailed a hybrid variant of a C-based, midsize CUV in the U.S. since Ford discontinued the Escape Hybrid with the debut of the current-gen model in 2012.

Subaru offers the XV Crosstrek Hybrid, based on its Impreza C-car, but it is classified by WardsAuto as a Small CUV due to shorter length and width than the RAV4.

RAV4 to Have Three Sources

Also aiding Toyota in its quest to take over sales leadership from the CR-V is the automaker’s seemingly unlimited capacity for the RAV4.

Since 2010, the majority of RAV4s sold in the U.S. have come from Toyota’s Woodstock, ON, Canada, plant. That’s when the plant added a second shift, after operating on a recession-dictated single shift since opening in 2008.

Last year, through overtime, Woodstock was able to churn out more than 220,000 RAV4s.

And to further satisfy U.S. demand, Toyota has plans to expand production to a third location, announcing earlier this month the automaker’s Cambridge, ON, North plant, current home to the Corolla, would switch to RAV4 production in 2019. That’s when Corolla production for the U.S. shifts to a new plant in Guanajuato, Mexico.

The move is in keeping with the industry trend to build lower-margin subcompact and compact cars south of the border, while reserving U.S. and Canadian plants for higher-margin light trucks.

Asked for a rebuttal to Toyota’s goal, a spokesman for American Honda points out the CR-V has achieved its No.1 status largely through retail sales and that it is the all-time best seller among C-segment CUVs, achieving six straight years of growth.

Honda long has shied away from fleet business, maintaining no official fleet division, although its dealers sell to fleets, including daily-rental companies.

Roughly 10% of the U.S. sales of any Toyota model are made to fleets.

The XLE model, which adds a leather-wrapped steering wheel and a power liftgate as standard, is $26,270, while the new sport SE grade, with unique 18-in. wheels and paddle shifters, is $29,265.

Ericksen is pleased the hybrid, which should account for 10%-15% of all ’16 RAV4 U.S. sales, starts at only $700 more than its all-wheel-drive gas sibling. The hybrid is available only with AWD, to reduce build simplicity and meet increasing customer demand for the feature, he says.

“AWD is becoming popular throughout the entire country, (and) when we looked at the sales plan and what we wanted to achieve with this vehicle, we felt that making it simple with the AWD and only a $700 price step over the gas counterpart was very good value,” Ericksen says.

Prices don’t include a $900 destination and handling charge.