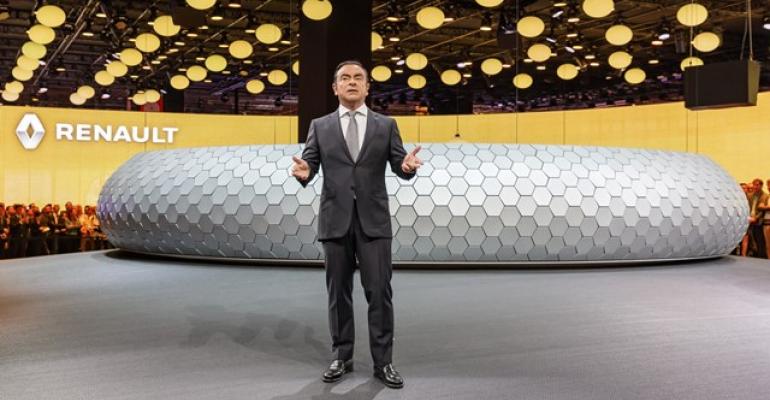 ‘Told You So,’ Renault-Nissan’s Ghosn Gloats

Nissan&rsquo;s CEO says he is thrilled other automakers jumped onboard the electric-vehicle bandwagon at this week&rsquo;s Paris auto show. &ldquo;Welcome to the competition,&rdquo; he says.

That was the clear sentiment of the Renault-Nissan Alliance chairman, who is relishing the sudden appeal of battery-electric vehicles among his European automaker counterparts that for years have pursued a proven, more traditional path of diesel and dabbled in plug-in electric vehicles.

“I am very glad today the same people who mocked us are the same people who say, ‘We have five (EVs) coming in the next five years,’” Ghosn tells journalists at the Paris auto show, where Volkswagen made headlines for its I.D. concept EV. The I.D. will go into production in 2020 and mark the German automaker’s transition to battery-backed propulsion after its diesel-emissions-cheating scandal.

Opel also showed an EV, the Ampera-e, which will be available in the spring. Renault itself presented a new Zoe for immediate sale with an industry-leading range of 249 miles (400 km) in the New European Driving Cycle, and took the opportunity to declare it recently surpassed 350,000 EV sales since 2010 to account for 50% of global deliveries.

Ghosn also expresses surprise at the adoption rate for EVs in China, which he says will unexpectedly outpace the U.S.

“China is booming with electric cars,” he says. “We are even losing our status of leaders of (EVs) in China, because you have a lot of Chinese makers selling cheap electric cars.”

That emerging dynamic has Renault-Nissan scrambling to engineer an affordable EV for China to regain its edge in the marketplace.

“Welcome to competition,” he adds. “Electric technology is part of the future. The only question is how fast, how high (and) this is dependent on how strict the emissions are going to be.”

Ghosn says the degree of growth from emerging zero-emissions zones in metropolitan areas also will determine the pace of EV sales.

Ghosn also addresses the alliance’s addition of Mitsubishi, which is expected to happen by the end of the year and give Nissan a controlling 34% stake in its beleaguered rival and small-car collaborator for $2.2 billion.

“So far so good,” says Ghosn, who hopes to work the same magic on Mitsubishi, which is reeling from overstated fuel-economy estimates and a possible exit from the U.S. market, as he did with Renault in the 1990s and Nissan a decade later. “There should be no problem making the deal.”

Ghosn stresses Nissan will not be the sole benefactor of the acquisition. Nissan for several years has sourced mini-cars from Mitsubishi, so it would appear at first blush the two simply would accelerate the collaboration and reap cost savings. Not entirely, he says.

“It’s massive between Mitsubishi and Nissan, (but) also it may be very significant between Renault and Mitsubishi,” he says. “The synergies will be massive.”

Ghosn stops short of saying the deal will save Mitsubishi in the U.S., where sales are up modestly but the automaker has shuttered its lone assembly plant. The prospect of paying millions of dollars in fines in its home country for the regulatory violations also puts its future in the U.S. into question.

“We have to dig more into the U.S. We have not been to the very specific geographic level,” he says. “But you talk about purchasing, engineering, platforms, engine, plug-in hybrids…It’s massive.”

Ghosn also says the alliance will hold off on deciding whether to invest in its Sunderland, U.K, assembly plant until Britain concludes negotiations with European Union to exit the political and economic group.

Sunderland makes five Nissan and Infiniti models at an output of more 500,000 units annually. It is considered the gem of the alliance’s pan-European production footprint, with Ghosn calling it “a great plant,” but the facility faces the prospect of EU tariffs on its heavily exported vehicles if the U.K. exits.

There has been speculation Renault-Nissan would move the production to France.

“The story about pressure from the shareholders to move production doesn’t exist,” Ghosn says. “I’m not saying that there is no temptation, but it doesn’t exist.”

So for now, investment decisions regarding Sunderland has been put on the back burner.

“We will not make a decision in the dark. We will postpone them,” he says.