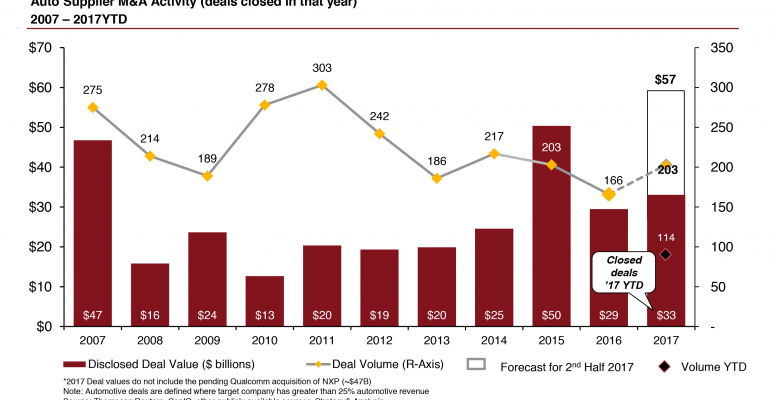 Disruptive technology, and the need to play in the fast-emerging sectors of autonomous drive and advanced powertrain, is ratcheting up the mergers-and-acquisition fever in the automotive supplier sector to record levels.

This year will mark another new high for automotive supplier deals, consultancy PwC says, predicting activity will total some $57 billion, surpassing 2015’s mark of $50 billion and triple the level of five years ago, with no slowdown in sight.

Suppliers are likely to close more than 200 deals this year, up 25% from 2016 and about on par with 2015 in what the consultancy sees as the midpoint of this latest M&A cycle, expected to run through 2019 or so.

“This is not the end of the story,” Dietmar Ostermann, global automotive advisory leader for PwC and author of the report, says of 2017’s red-hot pace.

Included in this latest M&A wave is a tsunami of megadeals valued at $500 million or more, which PwC says should reach 18 this year. Many of those are tied to electronics, as suppliers scramble to add systems and software expertise in an effort to stake out ground in autonomous-vehicle and connected-car sectors.

Multiples also are on the rise, with acquisition costs ranging from five to 11 times revenue. Deals in the electronics sector are drawing multiples as high as 25, Ostermann says, as automakers and suppliers bid up sale prices in a fight over the handful of companies with the advanced technology and code-writing ability so desperately needed.

“Those (software-development capabilities) don’t come on the cheap,” Ostermann tells WardsAuto. “Automatically, when you buy one of those (companies) you are in the megadeal category.”

Look no further than the $15.3 billion deal closed earlier this week that saw chip-making giant Intel swallow up Israel’s Mobileye, maker of cameras, sensors and software targeted at the autonomous-vehicle market.

“There wasn’t a time in automotive history that I can remember that you’ve had so much technology change going on,” Ostermann says. “It’s a war out there between the OEMs and the suppliers as to who is taking on the responsibility in (advanced-technology development). And the war is not played (out) yet, so we don’t know (who will win).”

While electronics is hot, powertrain is the segment that continues to lead all M&A activity, as suppliers seek technology needed to meet tougher global emissions and fuel-economy standards worldwide. Much of that acquisition activity is around electrification, but also sought after is expertise in turbochargers, superchargers, direct injection and advanced transmissions.

PwC predicts 40% of global new-vehicle sales in 2023 will feature engines with turbochargers or superchargers and 60% will be direct-injected. Alternative powertrains are expected to account for an 8.5% global share by then.

At the opposite end of the scale is the interiors sector, which for now has devolved into a commodity business that is drawing multiples averaging just five times revenue.

“The OEM has sucked all the money out of (interiors) and calculated for each supplier exactly what the margin is going to be,” Ostermann says, noting automakers now perform the majority of design and engineering work, while suppliers are asked merely to manufacture to specification. “That’s why you see such a depletion of profitability in interior.”

That could change as autonomous technology comes into play and opens the way for even more creative interiors with reconfigurable seating, touchscreen surfaces and a bevy of new electronics. “There’s a future that some interior suppliers are strategizing about,” Ostermann says.

New materials applications are helping drive M&A activity in the body and chassis arena, where suppliers are looking for expertise in forming and joining aluminum, carbon fiber and advanced-steel parts, PwC says.

The consultancy has identified 22 of the Global 100 suppliers that are “poised to drive further consolidation.” It doesn’t name names, but says 11 are North American, six are Asian and five European.

When it comes to acquisition targets, European suppliers make up the bulk of the companies in the crosshairs, accounting for 37% of all deals, a trend Ostermann attributes to the region’s dominance in technology development.

For the first time, Asian suppliers are the group at the head of most M&A activity, accounting for 41% of all deals this year, with the Chinese the biggest portion of that group, at 17%. Chinese acquisitions of Western assets have quadrupled in size to an average $660 million per transaction, the consultancy says.

“(The Chinese) are systematically going after top-notch technology players in the West right now,” Ostermann says, noting they are making moves “to be leaders in automotive supply.”

Despite all the activity, there’s a long way to go before the global automotive supply base is considered fully consolidated.

Once the world is down to five automakers and 15 major suppliers, “then it’s played out,” Ostermann says. “But we are far away from that.”