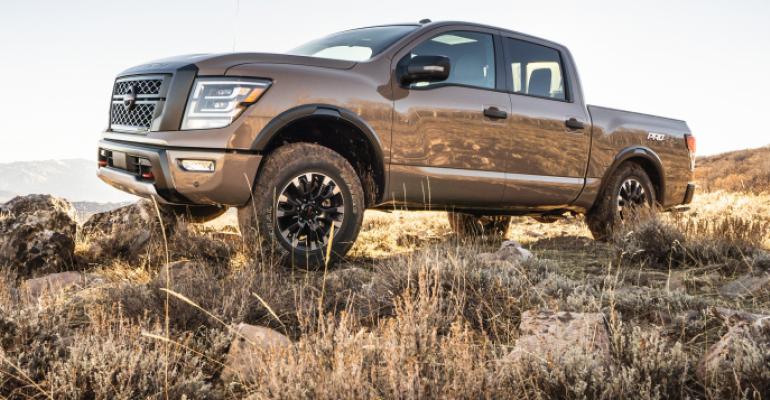 Still No Six for Titan

PARK CITY, UT – Despite being a 6-cyl. specialist on the car side – variations of its VQ V-6 won a Wards 10 Best Engines award a record-setting 15 times – Nissan still lacks the engine type in its Titan fullsize pickup.

And it looks like that will continue to be the case, a Nissan engineer tells Wards.

“We don’t have any plans immediately for the V-6,” Chris Day, senior manager-powertrain for Nissan, says during a recent Titan media drive.

The automaker has talked about bringing a 6-cyl. option out for the truck for years. In February 2018, a Nissan spokesman confirmed the automaker was planning a V-6 for the Titan, something large pickups from the Detroit Three all offer in the U.S.

But nearly two years later, and with the truck recently refreshed for ’20, a 6-cyl. option still is not available. The sole powertrain in the half-ton Titan remains Nissan’s 5.6L V-8. It’s the same engine offered in the ¾-ton Titan, which lost its Cummins V-8 turbodiesel option at the close of the ’19 model year.

It’s possible a 6-cyl. for Titan could come in another refresh, but if it doesn’t arrive until a full redesign the wait will be awhile for interested customers.

Day notes Nissan has long had a 4.0L VQ V-6 available in its Frontier midsize pickup, as well as V-6s in some of its bigger CUVs. The 4.0L, debuting with the current generation Frontier in late 2004, is 15 years old and would not be a likely candidate for a post-2020 pickup truck without modifications to meet increasingly stringent emissions and fuel-economy rules in the U.S.

While once seen as a penalty compared with brawny 8-cyls., today 6-cyls. account for more installations in the Ford F-150, the best-selling half-ton pickup in the U.S., than do 8-cyls., meaning Nissan could be losing sales without a smaller engine.

Ford kicked off the modern pickup 6-cyl. craze with its direct-injected and twin-turbocharged EcoBoost 3.5L V-6 in the prior generation F-150.

General Motors has relatively low 6-cyl. installation rates in large pickups: 15.5% on the Chevy Silverado and 2.8% on the GMC Sierra. Both trucks were redesigned last year and now offer a 3.0L I-6 turbodiesel and 4.3L direct-injected gas V-6, the latter the more popular of the two per Wards Intelligence installation data.

GM also has introduced a 2.7L turbo I-4 for the Silverado and Sierra, the smallest engine available in the U.S. large pickup segment as of now.

The remaining player in the fullsize truck group in the U.S., Toyota, no longer has a 6-cyl. option, discontinuing the Tundra’s 4.0L V-6 with the close of the ’14 model year. However, rumors suggest the automaker is planning a 3.5L twin-turbo V-6 for the next-gen Tundra, which is due next year as a ’21 model.

Because fullsize pickups are heavily incentivized in the U.S., it’s difficult to determine what pricing advantage, if any, Nissan could enjoy with a 6-cyl. in its lineup. However, it’s possible a turbo V-6 with competitive specifications could attract a customer willing to pay closer to retail price.

Pricing has not yet been announced for the refreshed ’20 Titan, but the ’19 model begins at $30,690, not including destination and handling, taxes and fees.

Ram considers its 6-cylinders upgrade engines, with pricing on trucks equipped with the 3.6L mild-hybrid V-6 north of $34,000.