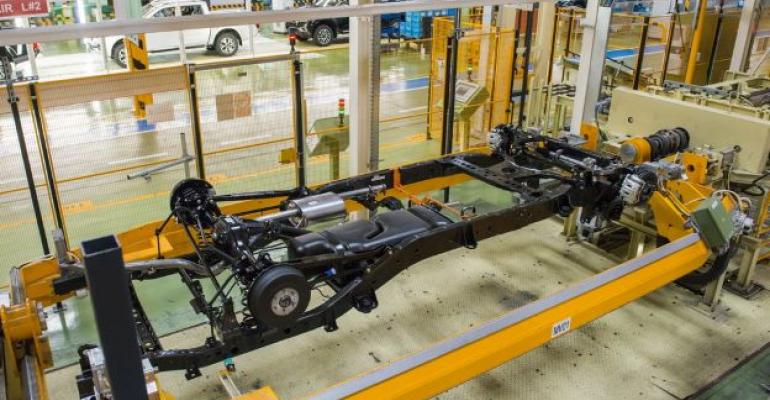 One of Nissan Spain’s two Barcelona plants operating at 30% of capacity.
Industry News

MADRID – Spain’s vehicle, trailer and semi-trailer manufacturing industry closed the first quarter of 2019 with a total of 231,100 workers, a decrease of 2,000 jobs compared to the same quarter of 2018, National Institute of Statistics data shows.

Spain assembled 756,823 light vehicles in first-quarter 2019, down 1.8% from a year earlier, according to data released by ANFAC, the main Spanish association of automakers. Analysts attribute the job losses to weakness in both the Spanish and other European markets.

More job losses lie ahead. Nissan Spain has reached a 4-year labor agreement with its unions that includes the elimination of another 600 jobs at its Zona Franca and Montcada i Reixac plants in Barcelona.

Nissan Spain, meanwhile, will invest €70 million ($78.2 million) in a new paint shop in the Zona Franca plant that will comply with new environmental requirements, which could facilitate the allocation of new models in the future.

The Zona Franca plant currently has a workforce of 3,050 people but is operating at only 30% of its annual capacity of 200,000 vehicles. The factory assembles Nissan Navara, Renault Alaskan and Mercedes-Benz (X-Class) models, as well as electric eNV200 light-commercial vehicles. It

stopped manufacturing Pulsar and Evalia cars and a diesel version of the NV200 in mid-2018.

said automakers in Spain will have to reduce their labor, energy, logistics and other production costs to preserve the country’s auto industry at its current level.

De los Mozos rejects the sector-wide framework labor agreements that unions, animated by leftist parties’ gains in the April 28 general elections, are seeking. “We do not want labor agreements per sector, but salaries linked to the competitiveness of each plant,” he says.

The ANFAC president says Spanish automakers must diversify the models they produce in accordance with new mobility concepts, but those concepts need to be defined.

De los Mozos says uncertainty about future mobility in Spain stems largely from the fact there currently are five mobility laws and 54 air-quality plans being promulgated by regional and municipal governments. He cites a recent study indicating four out of 10 Spaniards admit not knowing what car they should buy.

Consumer uncertainty, coupled with households’ and employers’ decreased confidence in the economy are the main reasons why, according to ANFAC, registrations have fallen by 30,000 units in the first four months of 2019 from year-ago and registrations for full-year 2019 are estimated at 1.2 million and 1.3 million vehicles, down 2%-3% from 2018.

The decline in registrations will contribute to the aging of the national fleet, which will reach an average 13 years in 2022, ANFAC says. By then, the trade group projects, 16% of the fleet (3.7 million vehicles) will exceed 20 years of age.