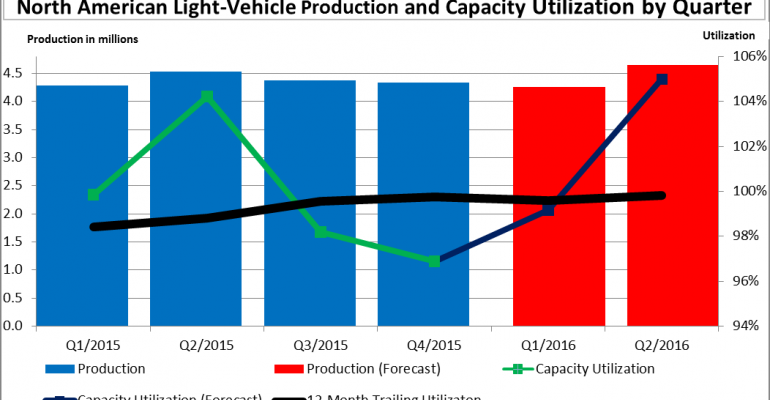 Several plants building cars will stay below full capacity, even with light-vehicle sales expected to continue hefty year-over-year gains in the first six months of 2016.

Low gasoline prices are helping fuel record sales in North America, and several assembly plants building trucks, particularly CUVs and pickups, are busting at the seams to keep up with demand.

However, while low fuel prices are pushing buyers to trucks, cheaper gasoline is having the reverse effect on car output. Several plants mostly or solely building cars are below full straight-time capacity and forecasted to stay there, even with light-vehicle sales, particularly in the U.S., expected to continue hefty year-over-year gains in the first six months of this year.

The drag caused by cars means total LV output will grow by a tepid 1% in first-half 2016 from like-2015, including a slight decline in Q1. However, some temporary slowdowns for tooling changes at a few factories, including some building trucks, also are contributing to the January-March shortfall as well.

Slower output means the industry in Q2 2016 will not quite get to 100% capacity utilization on a rolling 12-month basis for the first time ever, as WardsAuto expected it to three months ago. (Capacity utilization is the percentage of production against what each assembly plant can build in a typical 5-day workweek on two shifts per day.)

Consequently, North American LV capacity utilization, although still at a very healthy level, will decline year-over-year in Q1 2016 for the first time since Q1 2015, and for only the third time in the 18 quarters leading into the current period.