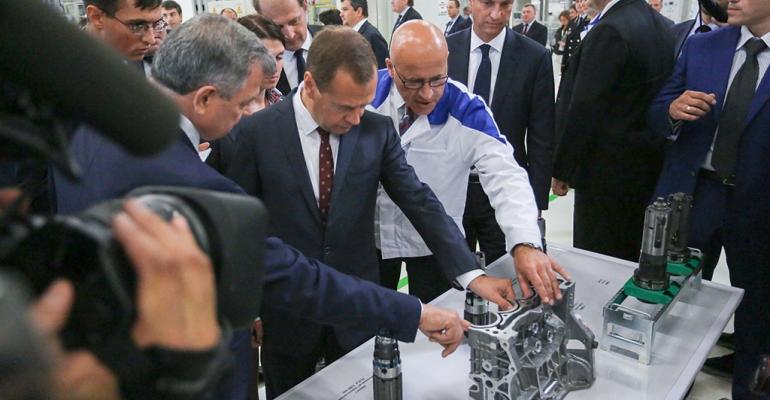 The Russian government plans to tighten conditions of doing business in Russia for global automakers operating in the country, senior officials with the Ministry of Industry and Trade say.

The government hopes the changes will lead to increased production and exports of cars from Russia.

Under the current agreements, manufacturers receive incentives for imports of auto components (usually zero duties) and access to several programs implemented by the Russian government to support automotive production. In exchange, automakers must commit to gradually increase localization of their Russian production and expand manufacturing capacities.

The existing agreements set the level of localization for the receipt of state benefits at about 60%. In addition, 30% of locally produced cars should have Russia-made engines and transmissions.

The government now is proposing incentives for greater use of Russian-made components in cars. For example, automakers must launch engine production in 2019 to continue to receive state support. Currently only three foreign automakers – Ford-Sollers, Volkswagen and Renault-Nissan – build engines in Russia.

Global automakers do not anticipate problems with the production of engines in Russia, as the majority of leading players already have built factories or plan to do so.

The government also has set deadlines for the assembly of automatic transmissions and electric motors for 2023 and 2026, respectively, for automakers seeking continued state support.

A gradual increase in the use of Russian stampings is not expected to pose a problem, either. Many automakers have long produced stampings of large auto parts in Russia, but some smaller ones still are imported.  The companies indicate they have sufficient capacity to increase localization of smaller stampings.

The main problem could be with localization of transmission production, as no foreign automakers operating in Russia produce gearboxes in the country. Most producers likely will oppose new localization requirements.

Besides renegotiating industrial assembly agreements, the Russian government could offer special investment contracts (SPICs), a new scheme that provides tax and other state benefits for automakers for up to 10 years.

Gleb Nikitin, a spokesman for the Ministry of Industry and Trade, says the scheme could create conditions for increased production of autos and auto components.

Under SPIC, the manufacturer would provide guarantees for establishing local production within a certain period of time, while the government would guarantee tax and regulatory incentives as well as other benefits.

Nikitin says under SPICs, the rate of localization would be measured not in percentages, as in the case of the industrial assembly agreements, but on the basis of technological operations and components produced in Russia, as well as the volume of investment, the number of jobs created and other factors.

In contrast to the industrial assembly scheme, where the government can fine companies that do not fulfill their obligations, the SPIC program does not impose sanctions against producers.

At the same time, sources close to the Ministry of Industry and Trade say manufacturers are more inclined toward the industrial-assembly mode even under tightened conditions because SPIC is unable to provide similar preferences.

A Nissan Russia spokesman says the automaker does not consider SPICs a full-scale mechanism of state support, and does not believe the scheme would stimulate further development of Russian auto production by global companies.

SPICs, according to producers, are aimed at attracting additional investments, while the main goal of automakers that already have invested billions in Russia is to increase local production and utilization of their existing capacities.