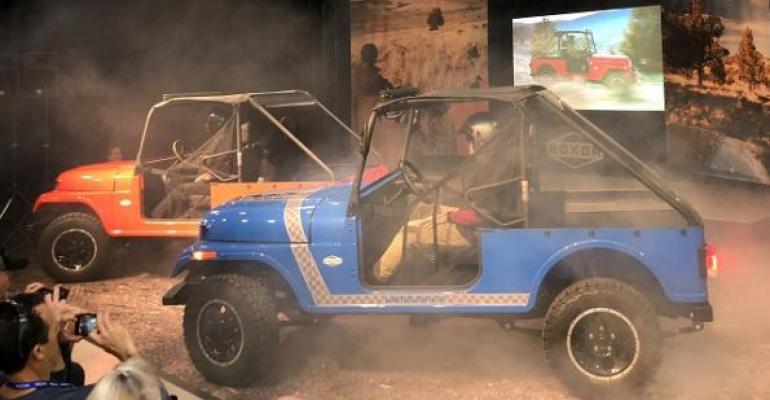 <p><strong>Mahindra reveals its off-road Roxor at its new plant in Michigan.</strong></p>
Industry News

Five years after setting up shop in Michigan with a half dozen employees, India&rsquo;s Mahindra is producing the Roxor off-road vehicle for the North American market.

AUBURN HILLS, MI – A humble Jeep-like off-roader revealed here marks the beginning of Mahindra Automotive North America’s plans for the U.S. automotive market that eventually may include postal trucks and other on-road vehicles.

Five years in the making, production of the Roxor 2-seat off-road vehicle is under way at the India-based company’s new $22.3 million kit assembly plant in suburban Detroit. Mahindra touts the 150,000-sq.-ft. (13,935-sq.-m) plant as the first new automotive manufacturing facility in southeast Michigan in 25 years.

Overall, Mahindra has invested $230 million in three facilities totaling 400,000 sq.-ft. (37,161 sq.-m) in southeast Michigan, including technical and engineering space in nearby Troy, MI.

The Roxor, derived from the Thar which is street-legal in India, is a utility vehicle powered by a 2.5L turbodiesel I-4 sending power to all four wheels via a 5-speed manual transmission. The drivetrain, sourced from India but modified for the U.S. market, produces 62 hp and 144 lb.-ft. (195 Nm) of torque.

Sales through a network of 300 power sports dealers begins this month, says Richard Ansell, vice president-marketing. The base vehicle retails for $15,549 plus $900 destination charge (for continental U.S. deliveries).

Designed strictly for off-road use in the U.S., the vehicle is speed-limited to 45 mph (72 km/h) and is designed to meet rollover standards for off-road vehicles. The vehicle has no on-road equipment such as turn signals or windshield wipers.

But while the Roxor’s footprint is similar to competitors’ models, Mahindra’s side-by-side features a steel frame and much more upright, car-like appearance, and its traditional transmission sets it apart from the competition, Haas says. The 3,035-lb. (1,377-kg) Roxor’s load capacity is 349 lbs. (158 kg), and it can tow up to 3,490 lbs. (1,583 kg).

“It’s a very different vehicle – we think it makes its own subset,” Haas says. “It’s much more capable than what’s out there today.”

Future powertrains are likely for the Roxor – Haas says development and tuning of an automatic transmission is 90% complete – and gasoline engines and even battery-electric options are possible.

Future products are somewhat dependent on response to the Roxor, Haas says, but also on whether the company is chosen later this year from five competitors bidding to build the next U.S. Postal Service delivery vehicle. The estimated $6.3 billion contract reportedly would involve replacing the current fleet of 180,000 postal vehicles over a six-year period.

Besides the Roxor, the engineering team in Michigan designed a new van for the Indian and European markets and is collaborating with engineers in India on a “large platform” vehicle, Haas says. The company owns Korean automaker Ssangyong so it’s possible Mahindra could coordinate a U.S. sales strategy with that partner.

“It (the Roxor) is kind of a bridging product,” Haas says. “Depending on how people in the U.S. respond to it, it opens or closes doors.”

So far, reaction to the Roxor seems positive. The company has 3,000 dealer orders in the bank and is receiving an order per minute since launching the Roxor website this week. The Auburn Hills plant, which already employs 300 workers and could add another 400 by 2020, has an annual production capacity of 10,000 units.