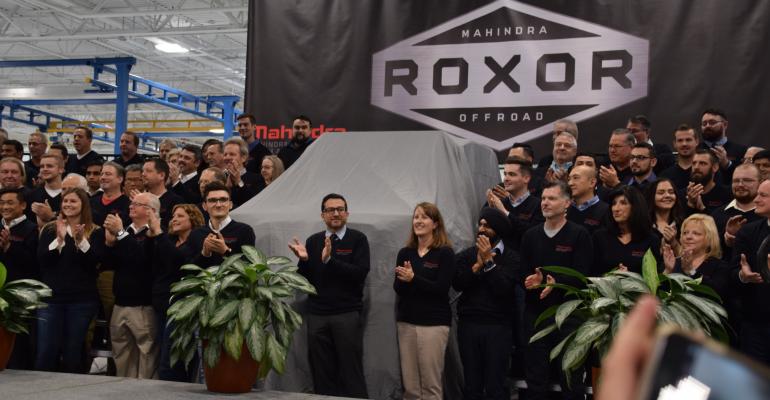 The Indian automaker dedicates its new North American headquarters, where heavy-duty off-road utility vehicles will be kit assembled. Meanwhile, the company is bidding to build next-generation U.S. Postal trucks, has an alliance with Ford and continues making gains in the U.S. tractor market.

A company executive says the new Mahindra Automotive North America facility is “97% ready to go” for complete-knocked-down kit assembly of a steel-bodied off-road recreational vehicle to be named Roxor, suited for rock crawling or heavy work. Half the value of the vehicle is coming from India, while the rest is North American.

The vehicle was not unveiled as expected, making for an awkward moment when a black curtain behind the stage was dropped precisely when officials cut the ceremonial ribbon, revealing 150 plant employees on bleachers, flanking the vehicle underneath a gray tarp that was never raised.

Rick Haas, president and CEO of MANA, says there are more than 1,000 customers interested in buying the Roxor, but that the company is only one-third of the way to building a pool of about 300 retailers in the U.S.

Haas says the vehicle will be unveiled in about six weeks, after the dealers are assembled and salable units are making their way to showrooms. The Roxor will be distributed through the “power sports” retail network, which includes all-terrain vehicles and snowmobiles. But an agricultural version from the Roxor platform will be available from tractor dealers in the future.

Mahindra first came to Metro Detroit in 2013, setting up its North American technical center in nearby Troy with seven employees, then expanding to a second facility housing as many as 120, many of them engineers. A key project for that staff was designing an all-new on-road European-style multipurpose vehicle, which will launch soon in India and other markets, but not the U.S.

“Today marks the fundamental shift from our original mission as a captive engineering center,” Haas says at yesterday’s opening. “We are here to expand Mahindra’s automotive business in the U.S.”

Exactly how far that strategy will take Mahindra into the U.S. passenger-vehicle market remains to be seen. The company owns No.3 Korean automaker Ssangyong, whose board is considering whether to sell vehicles in the U.S., perhaps as early as 2020.

“Happily, Americans have accepted the idea of Korean quality and automotive competence. It could be a logical step for us to introduce that brand here,” Mahindra Group Chairman Anand Mahindra tells journalists after the ceremony.

“Nothing is imminent, but as the electrification of fleets improves, we have the right products in the future which we could introduce here,” Anand Mahindra says, referring to the company’s acquisition of European design house Pininfarina, which he says could result in a jointly developed premium electric vehicle.

Mahindra hired former Ford executive Haas from Tesla, where he was director of engineering for the Model X CUV, to set up the technology outpost here. Anand Mahindra takes a jab at Tesla founder Elon Musk, who is attempting to build his company of EVs in California without manufacturing methods pioneered and honed in Detroit.

“I love the idea of a company based in Detroit, so it can leverage the talent, experience and conventional skills of Detroit, of manufacturing and deep knowledge,” Anand Mahindra says, referring to the new tech center and assembly plant.

“As you know, some of the new-age companies are finding manufacturing is not as easy as they thought it might be,” he says, referring to Tesla’s difficulties in launching the affordable Model 3 and achieving anticipated volumes. “I think a new respect is coming back for what it takes to get traction and to actually produce in large numbers. Detroit has that skill.”

Anand Mahindra says the new MANA, led by Haas, has a startup mentality able to access the Mahindra tool kit, which includes low-cost engineering talent in India, plus resources from Pininfarina and Ssangyong and a reputation for rugged vehicles and tractors.

“Let’s see what we can introduce which will have people lining up around the block to buy,” the chairman says. “This might look like a very run-of-the-mill small factory opening, (but) you could actually be looking at something that might be a footprint for the future.”

Mahindra also is one of several bidders vying for a contract to build the next-generation U.S. Postal Service delivery truck. Expected to be awarded next year, the contract is expected to call for more than 30,000 vehicles to start.

​Mahindra has produced prototype trucks for testing and delivery, but the company says it is unable to discuss the vehicle or the contract.

Sources confirm for WardsAuto the Mahindra postal vehicle would use 2.5L 4-cyl. gasoline engines supplied by General Motors, similar to those used in the Chevrolet Colorado and GMC Canyon midsize pickups.

The company has not said where it would build the postal vehicles if it wins the contract, but they will not be made  at the new plant here, a Mahindra executive says.

For now, the focus is on the Roxor and its new North American assembly home. “This product, we believe, creates a whole new subsegment in the off-highway space – tougher and more rugged than anything else sold there,” Haas says.

By the end of this year, Haas expects MANA to have 250 employees, growing to about 700 by 2020. Investments to date total $230 million, and an additional $600 million is in store “over the next couple years as business opportunities mature,” he says.

MANA now is hiring its manufacturing staff (with starting pay of $18 an hour). The plant has capacity for 5,000 units annually with one shift without working weekends, and Haas says a decision will be made in the first quarter whether to add a second shift. He expects run speed to be achieved by spring.

The United Auto Workers union is not representing the hourly staff. “If workers believe they need representation, they will have to make that decision,” Haas says.

Mahindra is encouraged by its expanding presence in the U.S. tractor market since its arrival in 1994. It was the No.6 retailer of tractors below 120 hp in 2010 and now it’s No.3. CKD tractor kits are shipped in from India, Japan and Korea and assembled at plants in Texas, Pennsylvania, Tennessee, California and Kansas.

In 2015, the tractor division launched an agricultural utility vehicle, the Retriever, which is assembled in Batesville, AR, by a local family-owned company that has grown rapidly as a result of the Mahindra business.

“I think it’s a very interesting sidebar that an Indian company comes here, builds its brand in America, an awareness of its brand, and triples the business of an American-owned family manufacturing outfit,” he says.

Asked if Mahindra is considering an alliance with or acquiring an established automaker, such as Fiat Chrysler, to quickly expand its U.S. presence, the chairman says the company is “always looking, shopping,” having purchased two Turkish operations and a Finnish harvester manufacturer in the agricultural sector in the past six months.

Mahindra has an alliance with Ford, primarily focused on India. “We will spend three years exploring opportunities for synergies between our two companies,” Anand Mahindra says. “We will see whether Ford and Mahindra can work together,” perhaps in the areas of purchasing, mobility and electrification.

“The future is so unpredictable,” he says. “If you can find any alliance that helps you navigate that future better, we’d be open to it.”