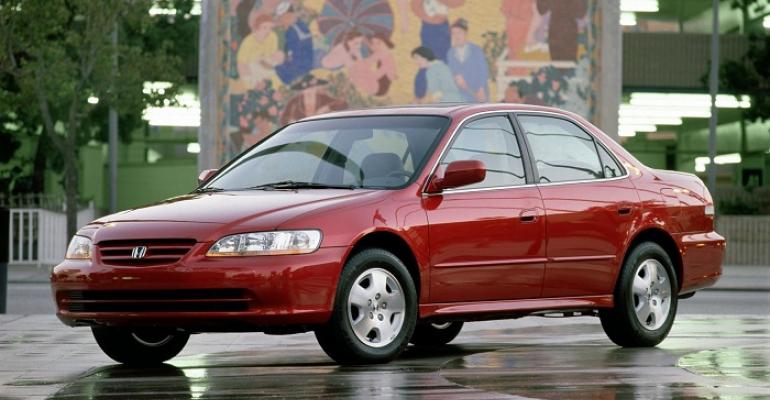 Analysis by SRR shows from 2004 through 2013 the percentage of recalls completed rose from 75% on average to roughly 79%.

SRR held its second annual Automotive Industry Warranty & Recall Symposium here Feb. 24, following what was a record year for recalls in the U.S., thanks to high-volume General Motors and Takata callbacks.

Completion rates are improving “and I think they’re going to continue to,” Neil Steinkamp, managing director-SRR, tells WardsAuto. “I think there’s pressure from regulators. I think the manufacturers want it. They’re instituting new systems. But it’s a new process. There’s going to be a learning curve. I think we’ll figure it out (and) completion rates will continue to elevate.”

A record 63.9 million vehicles were recalled in the U.S. in 2014. Recalls of models with faulty Takata airbag inflators made up 30% of that figure, while vehicles recalled under GM’s ignition-switch issue amounted to 20% of the callbacks.

Analysis by SRR of National Highway Traffic Safety Admin. recall data and quarterly progress reports, studying recalls with six or more reported quarters, shows from 2004 through 2013 the percentage of recalls completed rose from 75% on average to roughly 79%. Looking at the median figures, 75% of vehicle recalls were completed in 2004 compared with 85% in 2013.

The range has fluctuated, Steinkamp notes, pointing to dips in 2011 and 2012 from 2010, but the overall trend is upward.

Component groups have an average 70% completion rate over the past 10 years, Steinkamp says, with the completion rate for powertrain-related repairs the highest, 83%. He speculates this may be related to the lengthy powertrain warranties most manufacturers have, sometimes as high as 10 years, which spur consumers to return to their dealer more often than they would with a shorter warranty period.

Looking at the past five years, steering-related repairs have been the most likely to be completed, averaging an 85% fix rate, with powertrain second-to-highest at nearly 84%.

Looking at completion rates by manufacturer with data for six or more reported quarters, BMW and Volvo had the highest median completion rates from 2004 to 2008, roughly 93%, while Nissan and Mazda had the lowest, about 73%. The overall median rate from 2004 to 2008 among 12 manufacturers studied, including GM, Ford, Chrysler, Honda, Hyundai, Volkswagen and Mitsubishi, was about 77%.

From 2009 to 2013, Volvo’s median completion rate rose significantly, to about 98%, while Mazda continued in last place, with a median rate of roughly 55%. The overall median was approximately 82%.

Steinkamp says Mazda’s lower repair ate may have been due to recalls it had relating to structural components, which as a group see lower-than-average completion results.

As expected, the rate at which recalls are completed increases the further out from the recall, with most recalls completed in the sixth quarter from their start, SRR says.

Two things that held true no matter how SRR sliced the data it examined: completion rates were lower for recalls of more than 100,000 vehicles and the older the vehicle, the less likely a recall was completed.

That’s possibly related to older vehicles being out of warranty. Surveys have shown when a vehicle exits the standard manufacturer warranty period, consumers typically reduce or stop visits to their brand’s dealer for service and seek out independent repair shops.

One injury and one death relating to faulty Takata airbag inflators occurred in ’01 Hondas, an Accord and a Civic.

“The aging fleet I think is a very interesting issue, and one that I think NHTSA will have to be thinking about as to whether or not they have an obligation to keep track of what’s going on with the older vehicles,” he says.

John Halloran, vice president-global automotive strategy for brand-protection firm Stericycle ExpertSOLUTIONS, says too much time traditionally has elapsed between notifications, noting in the past a recall letter may not have been followed up for six or seven months.

On the warranty front, Steinkamp says the historic year for recalls in 2014, and the expected continuing environment of higher-than-average recalls, is impacting how OEMs are reserving funds for warranty and recall costs.

Interesting to him is GM North America’s disclosure it now is using an actuarial-based estimation technique not just for warranty costs, but accruing at the time of vehicle sale the expected costs of a recall campaign.

“This is a change in financial reporting techniques and one I have not seen from other manufacturers,” Steinkamp says, noting no automaker is required to provide such a disclosure.

He believes some suppliers also would benefit from accruing funds for recalls.

“They have to be probable or reasonably estimable,” he notes, so smaller suppliers that may experience infrequent recalls may not see as much value in doing so.

Many automakers now are asking suppliers to shoulder at least some costs relating to recalls of defective parts.

Per NHTSA’s Part 573 Report, automakers are required to name manufacturers in a letter if they find a defective component, but Steinkamp says in practice suppliers aren’t always named, at least initially.

Over the last five years, SRR found suppliers of seats, seatbelts and airbags were most likely to be named in NHTSA recall data and 573 letters, perhaps because those items are more self-contained, he says. Suppliers of structural pieces, fuel systems and vehicle-speed control devices were the least likely to be identified.