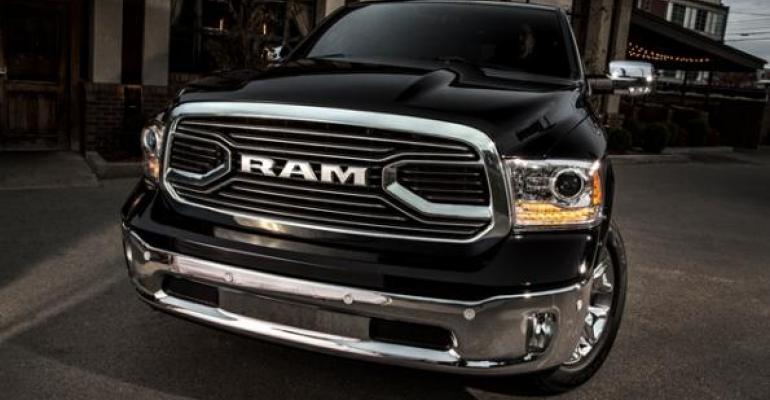 Ram overtaking the Chevrolet Silverado for second place in light-truck sales in September, combined with growing pickup inventories, may be a harbinger of an all-out truck sales war in last-quarter 2016.

A Clinton (Bill) was president the last time the Ram pickup truck brand leapfrogged General Motors’ Chevrolet Silverado to jump into the silver-medal spot in the monthly truck sales race.

It’s been 17 years since that remarkable event back in July 1999, when the then-Dodge brand whomped Silverado by 6,893 units in light-duty pickup sales, WardsAuto data shows. In September, Ram pulled off the same feat, albeit by a more modest 739 units this time around, selling 46,119 trucks to Chevy’s 45,380.

What Morrison doesn’t say is a spike in incentives on Ram compared with a year ago may have juiced September sales, with some industry observers suggesting FCA may have wanted to boost sales numbers and improve its bottom line closing out the third quarter. According to J.D. Power data reported by Bloomberg, incentives on Ram jumped $1,000 from a year earlier to an average $7,082 per vehicle.

Data from online automotive marketplace TrueCar shows a smaller but similar $887 year-over-year increase to $5,178 average incentive per vehicle, with GMC Sierra showing a $2,099 jump, second only to the $2,707 leap by the Nissan Titan. TrueCar data shows Silverado incentives up $601 year-over-year. Incentive estimates differ among reporting agencies due to a variance in sources of aggregated data.

In defense of Morrison’s marketing theory, incentives on Ram grew just $29 from August to September, while Sierra was up $1,496, Silverado $184 and F-Series $301.

It is unclear whether Ram can sustain its momentum, or whether FCA will want it to, given that Ram inventory is down 21% from August to September, hovering at an 82-day supply, WardsAuto data shows. Ram’s inventory was high in August, however, and in raw numbers the fullsize pickup still appears to be stocked about 20,000 units too high.

Silverado is running at 91 days’ supply, up 16%, while F-Series sits on a 93-day inventory, unchanged from the prior month. Overall, the large-pickup segment inventory is 11.1% above year-ago at 87 days’ supply.

WardsAuto considers a 90-day supply of fullsize pickups optimum on average for the year and for Sept. 30 inventory. The number historically grows to 95 days in October, 100 in November and 75 in December when end-of-year sell-downs and reduced production due to holidays cut into supply.

While Ram and Silverado inventories are above year-ago, only Ram is selling better than like-2015, while the light-truck segment overall has declined 6.3%.

If Ram’s strength continues, it may provoke an all-out war in the pickup segment as Chevy reacts to protect its turf, Ford fights back with its all-new Super Duty, Nissan battles for sales with a newly redesigned Titan and Toyota tosses more Tundras into the fray, adding inventory after shifting production to building more Tacoma small pickups.

Small trucks also may be cannibalizing fullsize pickup volume. Although WardsAuto data shows small pickups historically do best in the second quarter, GM’s re-entry into the segment two years ago with the Chevy Colorado and GMC Canyon reignited demand. That along with fresh versions of the Honda Ridgeline and Tacoma, and Nissan’s efforts to remain viable with the Frontier, suggest the segment may post its strongest quarter in October-December this year.

Automakers are cagey about plans for production changes or sales deals as they head into the fourth quarter.

“We’re prepared to respond to market factors, but we don’t consider price the single lever,” says Alan Batey, GM executive vice president and president-North America. “If you offer those sorts of incentives you will get a short-term boost. We will stay disciplined.”

“We’re lean and mean, unlike some of our competitors,” Batey says of GM’s truck inventory. “We’re in a good position (to close the year).”

“We’re going to continue to maintain a disciplined but competitive approach to our incentive spending,” Merkle says.