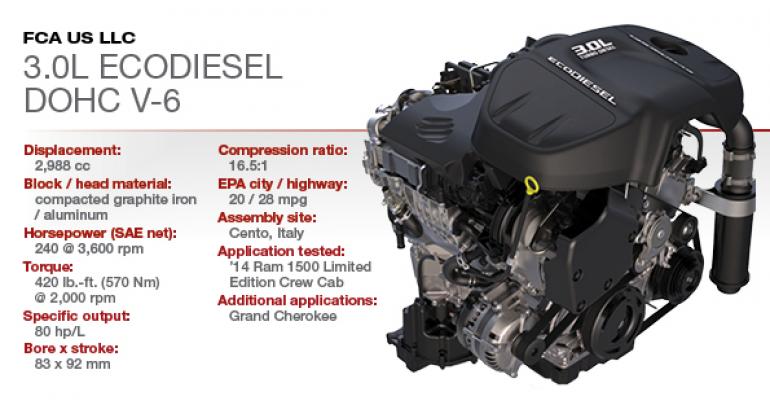 Ward’s 10 Best Engines competition has recognized outstanding powertrains for 21 years. This installment of the 2015 Behind the 10 Best Engines series looks at the development of FCA’s light-duty diesel.

Looking at the three major U.S. pickup truck producers, each so far is following a different path to comply with future CAFE regulations.

General Motors has introduced a pair of all-new midsize pickups, the Chevrolet Colorado and GMC Canyon, that are more fuel-efficient yet nearly as capable as fullsize trucks. Ford created the aluminum-bodied F-150 fullsize pickup that is more efficient and capable than its predecessor. Fiat Chrysler’s big fuel-economy play is making a 3.0L diesel V-6 available in its Ram light-duty pickups.

All of these approaches appear to be working in terms of consumer acceptance and sales. And over time, each likely will be incorporated into the strategies of other automakers. Nissan’s all-new Titan will offer a Cummins turbodiesel V-8 when it launches later this year, while GM’s Colorado/Canyon soon will be available with a 4-cyl. diesel. Toyota is revamping its segment-leading midsize Tacoma and is expected to offer a 5.0L diesel in its fullsize Tundra in 2016.

How long before every automaker offers fullsize and midsize trucks with ultra-efficient diesels and lighter-weight bodies?

Of the 44 entries tested by WardsAuto for its 2014 10 Best Engines awards, six were diesels and three earned trophies.

For 2015, WardsAuto tested five diesels, but only the Ram EcoDiesel emerged (again) as a 10 Best Engines winner. It continued to excel in judging criteria such as power, torque, technology, observed fuel economy and relative competitiveness. “A compact, efficient, powerful diesel just seems so right in a fullsize pickup,” they wrote. “They go together like sweat and equity.” As icing on the cake, Ram’s most-efficient 2WD model now is rated at 21/29 mpg (11.2-8.1 L/100 km) with the diesel.

This engine originally was developed in 2008-2009 by Italy's VM Motori, now fully owned by FCA. It has been used for several years in European-market Jeep Grand Cherokees, Chrysler 300Cs (known there as Lancia Thema) and some Maserati models. One key contributor to its unusual quietness is its rigid compacted graphite iron (CGI) block and bedplate. CGI typically reduces combustion noise 0.5 to 1.5 dBA vs. conventional gray iron.

Great NVH helped make it a strong candidate for use in North American versions of Grand Cherokees and Ram pickups, says FCA Diesel Chief Engineer Luis Cattani. “The fuel system was upgraded, and there were other minor changes, but most of the work was done around meeting the NVH requirements,” he says.

Of course, it also would need very good performance and fuel economy in those vehicles, especially under heavily loaded conditions.

The NVH requirements were more stringent than in Europe for the simple reason that most North American customers (unlike Europeans) would compare its sound and feel with gasoline engines, not with other diesels.

“Tweaking the combustion and calibration and working on design features – how many injections (per combustion event), etc. – was done to reduce the noise to characteristic diesel noise, but more appealing to customers used to gas engines,” Cattani says.

Not surprisingly, he says the toughest challenge in bringing the diesel to the U.S. was certifying not only its squeaky-clean emissions but also its on-board diagnostic requirements. “The amount of OBD diagnostics that are required here in the U.S. is much, much more than what we have in Europe. Tighter emissions standards here require more auxiliary systems to meet them.”

Cattani points out most diesels in North America today use the highly complex (and expensive) combination of a diesel oxidation catalyst (DOC), a diesel particulate filter (DPF) and selective catalytic reduction (SCR).

“But you don't see that system much yet in Europe. So we are talking about more aftertreatment systems that require more sensors, more controls and more logic to predict if something is deviating from where it is supposed to be.”

The second certification challenge turned out to be timing. “When you want to certify an engine in Europe, a third party will go to your testing facility, and the process is fairly quick. In North America, you submit everything to the EPA, and then you’re in their timeline to get approval. It was a learning experience, and we did learn. Next time we launch a new or upgraded diesel, we need to put those timing considerations into our development plans.”

Another key contributor to this engine's refinement – as well as its performance, fuel efficiency and emissions compliance – is a multi-pulse injection concept that Fiat invented some years ago. “The idea of having multiple injections instead of one to optimize combustion, get the best mix and reduce combustion noise, is an innovation that came from our company,” he asserts. “Pilot, or pre-main, injections before the main injection create a better mixture for more efficient combustion and lower emissions, and using multiple shorter, smaller injections reduces noise. Then post-combustion injections send fuel through the exhaust system to create exothermic combustion in the DOC that produces heat to clean the DPF.”

Cattani is reluctant to single out suppliers, because so many have contributed to the success of this engine, but he confirms it does use Bosch fuel injection and a Honeywell Turbo. And he agrees there is excellent opportunity for future improvement.

WardsAuto also has reported the CGI technology is provided by Sweden-based SinterCast.

“When we launched it for 2014, the highway fuel economy was 28 miles per gallon. For 2015 we released a new package with vehicle and engine updates that give us 29 miles per gallon. And we continue working on it. We can never be satisfied, or we will be out of the market soon,” Cattani says.

The obvious areas for improvement are NVH, fuel economy and performance, “because those are things that the customer wants and will pay for. You begin with the combustion process, the cylinder head, the intakes, the mixing of air and fuel, the pistons, the turbocharging, the EGR, the injection pressure, etc. You start with the hardware, then eventually software and calibration,” he says.

“This has been such a success that all of the OEMs will think seriously about doing it. That is why we need to continue looking into ways to do it better to stay ahead.”