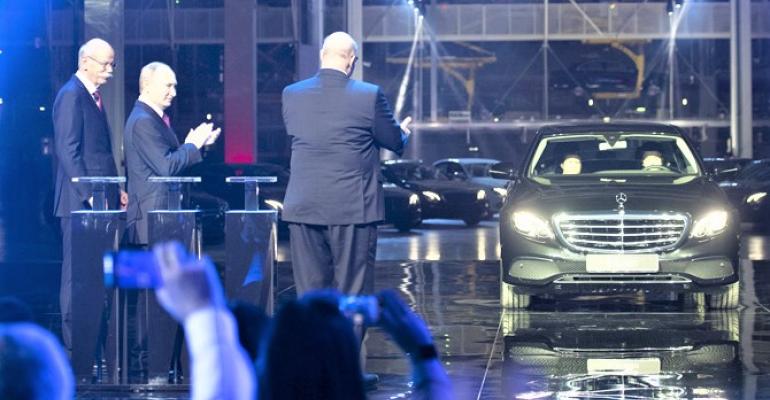 The factory’s annual initial capacity is 25,000 units. It will build Mercedes-Benz E-Class sedans and GLC, GLE and GLS crossovers.

ST. PETERSBURG – Russian President Vladimir Putin was on hand for the official opening of Daimler’s car-production plant in the Esipovo industrial park near Moscow.

Chairman Dieter Zetsche says Daimler’s investment in the plant came to RR19 billion ($300 million), or about 11% of annual Russian sales by the German automaker’s Mercedes-Benz brand.

The factory’s annual initial capacity is 25,000 units. It will build Mercedes-Benz E-Class sedans and GLC, GLE and GLS crossovers. Daimler will continue to import Mercedes’

Russian auto-industry analysts say most of the plant’s output will be sold within the Moscow region, where consumer purchasing power is relatively high. That was one of the factors in Daimler’s decision to locate a plant near the Russian capital.

Analysts also believe the automaker decided to establish a plant in Russia because of favorable conditions of a special investment contract allowing it to sell cars to the government. Restrictions on the sale of cars not built in Russia led to a significant decline in Mercedes sales several years ago.

Under current law, only locally built cars can compete for government business. That could work against Mercedes rivals BMW and Audi, whose products are assembled in Russia from semi-knocked-down kits. The contract also exempts Daimler from increasingly strict localization requirements, at least initially. Russian components suppliers currently lack the skill and experience needed to ensure regular supplies of auto parts to premium automakers.

The ability to sell cars to the government is important to Daimler, as luxury and premium brands such as Mercedes are highly desired by Russian officials and the segment benefits from generally steady demand.

Daimler five years ago proposed building an auto plant in central Moscow, but the project was scrapped because of economic and political circumstances.