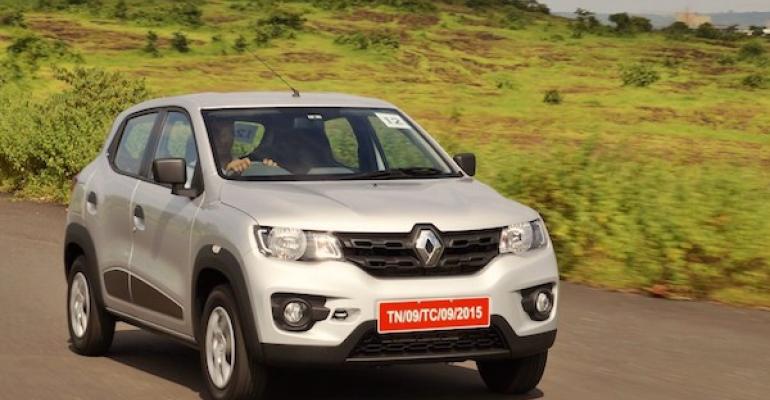 The Alliance has high hopes for its Common Module Family architecture, which makes it possible to build a vehicle using five or six different modules and produce 15 to 20 different models.

MUMBAI – The Renault-Nissan Alliance is untangling the French and Japanese automakersʼ complex relationship in India, relying in large part on a common platform designed to cut costs and allow the introduction of at least a dozen new products.

The Alliance has had a longstanding target of a 5% share of the Indian market but managed just 4.3% last year. Last year’s combined light-vehicle sales of 94,772 were virtually flat with 93,991 in 2014, according to WardsAuto data.

Results have skewed widely within individual segements. Renault car sales in 2015 soared 330% year-over-year, boosted largely by demand for the Kwid compact hatchback. The Kwid’s popularity  lifted the Renault car segment out of a 61.7% decline the previous year.

Besides the Kwid – India’s best-selling nameplate apart from market leader Maruti Suzuki after less than seven months on the market – Renault also has scored successes with familiar marques such as the Duster CUV, low-cost Datsun Go + and Lodgy MPV.

Exports mainly account for Nissanʼs contribution to the Alliance’s fortunes in India. Roughly matching Renault’s car sales in India but outsold by a 3-2 margin in the light-truck segment in 2015, Nissan has been focusing on exports to 106 countries – and with mixed results.

The Alliance, however, has high hopes for the Common Module Family architecture, which makes it possible to build a vehicle using five or six different modules and economically produce 15 to 20 different models by the hundreds of thousands.

“We are increasing our production capacity from 480,000 to 700,000, so that we are able to meet Indian and overseas demand without waiting for long,” says Colin MacDonald, Alliance CEO and managing director.

One such model already built on the CMF platform is the Kwid, for which Renault received 125,000 advance bookings. December sales totaled 6,888 and grew 9.5% to 7,544 in February, Renault says.

The wide range of products has allowed the Alliance to appeal to a broad customer base. In addition to the compact Kwid and Datsun’s Go + range, the upper end includes the Duster compact SUV and Lodgy MPV. The Alliance has further diversified its portfolio with last year’s addition of the Datsun brand, which shares platforms and powertrains with several other Renault and Nissan models.

All of these models are designed for Indian markets and are manufactured with 97% local content to make them affordable. This reflects the belief of Alliance Chairman Carlos Ghosn, who has said that among the BRIC (Brazil, Russia, India and China) countries, “the Indian market is the most promising. India will therefore play a critical role in the next 5-year plan of Renault and Nissan.”

Ghosn, however, had to mediate differences between directors of Renault and Nissan last year, when the Japanese automaker expressed concerns about the French government’s influence over Renault operations.

Under an agreement announced Dec. 11, the French government’s double voting rights within Renault ended April 1 and were limited to 17.9%. Renault, meanwhile, agreed to not interfere in Nissan’s governance.

“While there were important short-term issues to address, it was imperative that all involved took a long view,” Ghosn said.