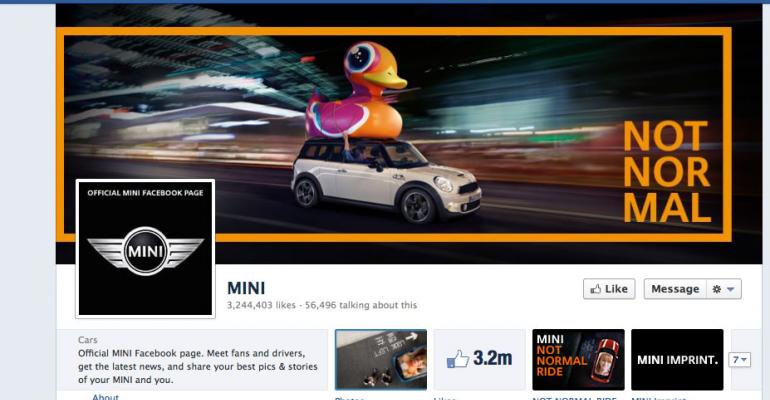 The BMW brand spends more than half of its marketing budget in the digital space and regularly communicates with users via the Internet.

LAS VEGAS – Digital marketing and online word-of-mouth recommendations from consumers have helped to maintain Mini’s sales momentum in the U.S. more so than traditional advertising, the brand’s head of marketing tells attendees of the DrivingSales Executive Summit here.

“There’s a community of our owners who enjoy being part of something bigger. We’re a little bit different from most, and we’re proud of that,” Tom Salkowsky says.

Mini, which marks 10 years since its U.S. return, spends more than half its advertising budget in the digital world – social networking, online video and other channels, he says. Mobile devices have yielded the biggest response.

Earlier this year, the brand placed a spot, “Win Small,” during TV coverage of the 2012 Olympic Games.

“It’s not a channel that we go into often. It’s very expensive, you need to go in deep and you have to be around for a long period of time to create that awareness,” Salkowsky says.

However, the ad drove an uptick in fans to Mini’s Facebook page and increased visits to the brand’s website.

The coming months mark new developments for Mini. The Clubvan, a longer variant of its Clubman, launches in December. A new brand ad campaign, “Not Normal,” rolls out next year and emphasizes the community Mini has built online.

During a 2-minute ad previewed here, photos from a wedding partially funded by Mini, footage from owners clubs events and other driver submissions are shown after a narrator describes the brand’s history.

The ad takes a swipe at “gas-guzzling SUVs,” which Mini found itself competing against when it re-launched in the U.S. a decade ago. That strategy has worked, Salkowsky says, but he acknowledges there’s new competition from small specialty cars such as the Fiat 500 and Scion iQ and subcompacts such as the Ford Fiesta and Chevrolet Sonic.

“We’re not the least-expensive small car you can buy,” he says. But the brand banks on driving experience and pride of ownership to get the word out.”

Salkowsky points to another digital campaign where the brand asked for a fantasy 6-word test-drive experience. Thousands of submissions were received, with the winner filmed speeding through a desert while being fed sushi by a stewardess and arriving to a stage with his favorite heavy-metal band.

The Internet film went viral, sparking more interest in the brand. Salkowsky says the winner of the test drive had never owned a Mini, but was interested after his friend bought one.

“We’re a feisty underdog,” he says. “We need to be listening to our audience and our community.”

One photo submission, a woman with the Mini logo tattooed across her chest, now adorns all of the brand’s offices as a symbol of inspiration.

“This isn’t ‘Photoshopped.’ This isn’t my wife,” Salkowsky says, displaying the photo. “(Mini buyers) are definitely not normal.”