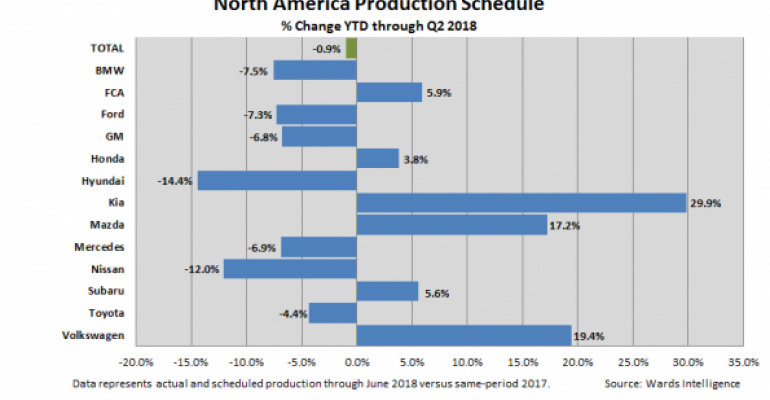 Most year-over-year increases in both the first and second quarters are due to added capacity and new products from smaller manufacturers.

In the first look at second-quarter North American production, continued strength in trucks will lead to a small increase over the same year-ago period.

The increase follows up an estimated 2.1% year-over-year decline in first-quarter 2018, with production pegged at 4.51 million units, compared with like-2017’s 4.61 million.

A resurgence in medium- and heavy-duty truck demand is augmenting continued strength in light trucks. Second-quarter big-truck output is expected to rise 12.8% above same-period 2017, with light trucks up 2.6%.

In the first quarter, estimated car output is expected to decline a whopping 12.4%, while trucks increase 3.4%.

By country, second-quarter production will grow year-over-year 9.3% in Mexico and a slight 0.2% in the U.S. Canada output will decline 14.5% in April-June, which follows an estimated decline of 12.6% in first-quarter 2018.

Mexico first-quarter production will increase an estimated 3.2%, but output will decline 1.7% in the U.S.

Most year-over-year increases in both the first and second quarters are from smaller manufacturers, including Kia, Mazda, Subaru, Tesla and Volkswagen. In most of those cases, increased production is due to added capacity or additional products.

However, among the major producers, FCA US and Honda are on track for increases in both quarters.

After several slowdowns in 2017 for plant retooling, FCA is pumping up production in the U.S. and is on tap for gains of 6.2% and 5.9% in the first and second quarters, respectively. Honda is riding the crest of some redesigned products that are increasing its market share and heading for production increases of 2.7% and 5.7%, respectively, in the first and second quarters.

Rounding out the top manufacturers, Ford, General Motors, Nissan and Toyota each are expected to record year-over-year downturns in both quarters.