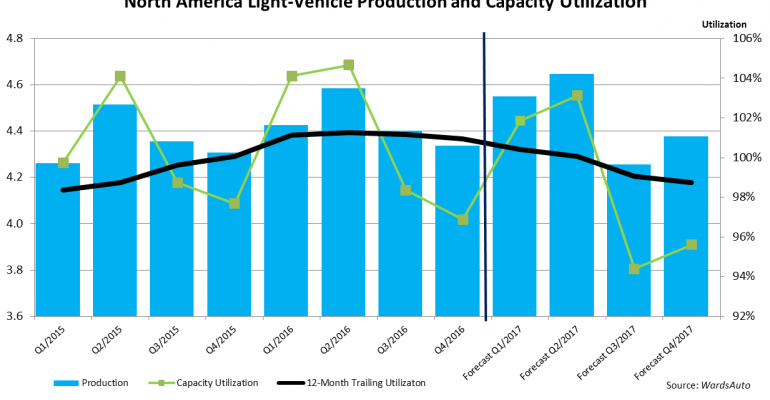 North American Capacity Utilization to Dip in 2017 Despite Higher Production

Despite an expected sales downturn, production will rise in 2017 due to added capacity and increased export output.

With North American light-vehicle production ending 2016 at an all-time peak of 17.75 million units, capacity utilization also pulled off a record by finishing at 100.9%, topping the previous high set the year before of 100.0%

However, due to several factors, capacity utilization will decline in 2017 to an estimated 98.7%, even with production forecast to rise this year.

Output is expected to increase 0.5% year-over-year to 17.83 million units in 2017. Part of the increase is due to two assembly plants that launched in 2016 – Kia’s Monterrey facility and Volkswagen/Audi’s plant in San Jose Chiapa – having their first full years’ worth of production in 2017.

Additionally, a new Daimler/Nissan joint-venture plant in Aguascalientes begins output in the third quarter, and some light-vehicle capacity has been added at a Navistar plant in the U.S., which adds overflow production of General Motors’ large vans this month.

Softening North American sales, forecast to decline slightly in 2017 from last year, will hold down production. Plus, some overbuilding in 2016 caused an inventory build-up in the U.S., which will be alleviated through some production slowdowns, particularly in cars.

But output still will rise due to replacement capacity, or added North American sourcing for vehicles previously imported from overseas. Also, production for export is expected to increase.

While Canada and the U.S. will follow the overall North American trend, capacity utilization in Mexico will increase to 107.7% in 2017 from 99.8% in 2016. Much of the aforementioned added capacity is located in Mexico, and production is forecast to top 4 million units for the first time in 2017. The increase is 17.8% above 2016’s total of 3.46 million.

In the U.S., shift reductions and long-term shutdowns at some plants to re-tool for new models will cause production to decline 3.1% year-over-year to 11.6 million units in 2017. Capacity utilization will slip to 98.7% from 103.3% last year.