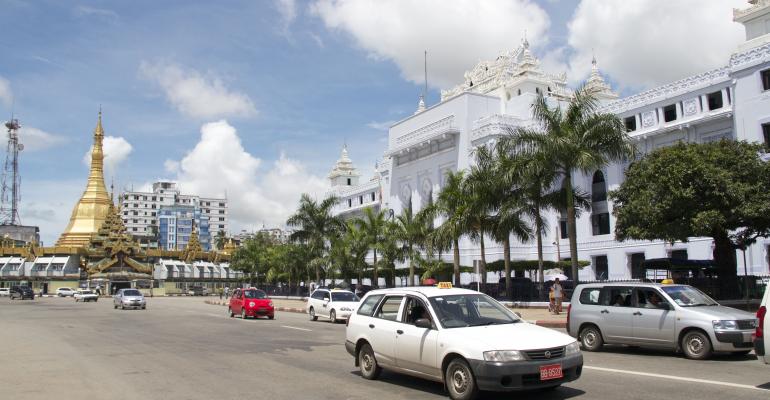 Although it has a population of 51 million, only 5,000 new cars were sold in the Southeast Asian country formerly known as Burma during the last financial year. Importer Michael Rudenmark predicts 2016 sales will be down 20% from prior-year.

Although it has a population of 51 million, only 5,000 new cars were sold in the Southeast Asian country formerly known as Burma during the last financial year.

“The future is very good, potentially. But right now it’s a very primitive market,” says Htoo Aung Lin, executive committee member of the Authorized Automobile Distributor Assn., which represents Myanmar’s new-car industry. Having only a tiny assembly base, the country’s vehicle market for the time being essentially consists of imports.

That this situation even exists is something of a turnaround. Car imports effectively were banned under the military regime until September 2011. A half-million cars were imported during the previous quasi-civilian government’s 5-year tenure that ended in April.

This sudden influx of vehicles has caused congestion in the commercial capital of Yangon, as well as a number of arguably misguided policies designed to lessen it.

For instance, Yangon’s municipal authority in January 2015 introduced a policy requiring applicants for car-import permits to prove they have a parking space. The policy apes similar rules that apply in Japan, the source of most imported vehicles in Myanmar.

The policy created a black market in parking-permit recommendation letters, which cost applicants and estimated 700,000 kyat ($590) each. When Myanmar’s first democratically elected government in 50 years came to power in April, it did so on an anti-corruption platform.

A government committee announced June 20 it would allow certain commercial vehicles to be imported without permits. Passenger cars, however, remain subject to the permit requirement.

“It’s a rough patch we’re going through and businesses are suffering,” says Michael Rudenmark, managing director-automotive at Yoma Strategic Holdings. The Singapore-listed local company is the Myanmar importer and distributor of Volkswagen vehicles and Bridgestone tires and distributor of Mitsubishi vehicles.

Rudenmark predicts sales will be down 20% this year compared with 2015, adding it is too early to tell whether the new government will be more business-friendly than its predecessor.

Other industry experts tell WardsAuto they are optimistic the new government will adopt longer-term policies that are properly enforced and which will promote sustainable growth of new-car sales.

Soe Tun, president of the Myanmar Automobile Manufacturers and Distributors Assn., which acts as a bridge between policymakers and the private sector, says Japanese regulations are ineffective in the context of Myanmar.

“In Japan, authorities will go to a car owner’s house to check the address registered. In Yangon the permits are fake and there’s no public or private parking.”

The MAMD submitted 16 proposed solutions to lessen traffic congestion to the government two months ago, but none have been implemented. Soe Tun says up to 80% of vehicle sales in the country take place in Yangon, whose population is about 5.2 million.

Because the Astrologer Said So

Another issue that ultimately may encourage new-car sales is that many imported used cars are right-hand-drive Japanese brands. As a former British colony, motorists in Myanmar drove on the left side of the road until 1970, when the superstitious former dictator General Ne Win changed the law overnight because his astrologer believed the country had moved too far to the political left.

“The biggest challenge for the importers and distributors of new (left-hand-drive) cars and trucks is primarily used-car imports,” says Mike Pease, general manager-Ford distribution at Capital Automotive in Yangon. “While there have been some moves to curtail (used RHD) imports on the basis that they are clearly unsafe and do not meet the legislated left-hand-drive requirement, progress has been slow.”

Chevrolet is keeping a close eye on these developments, having opened one of its largest showrooms in Southeast Asia in November 2014 through a joint venture between Singapore’s Alpine Group and Myanmar’s AA Medical Group. According to General Manager Samuel Eaks, the company’s 250 deliveries last year made it Myanmar’s No.2 new-car seller, sandwiched between Mazda and Mercedes.

“I wouldn’t say Myanmar’s market is crowded with brands yet, but it’s becoming more so day by day,” Eaks says.

When he came to Myanmar two years ago, Eaks says, newly sold vehicles comprised less than 1% of all registered passenger and commercial autos. Data from the country’s Road Transport Administration Dept. shows new cars’ share has grown to 3%.

Many in the industry complain the automotive sector is overtaxed. “It seems that the government sees the car industry as an easy target for collecting tax,” says an industry source who asked to not be named.

Taxes on commercial vehicles are comparatively lower than those on passenger vehicles, in part because Myanmar’s economy is driven by agriculture.

As for vehicle manufacturing, Myanmar’s proximity to established major production hubs such as Thailand makes the potential for local assembly negligible.

“You have countries manufacturing cars next door and free trade (in the ASEAN regional single market) soon – why would you move all that just to please a very small market?” Rudenmark asks.

That said, about 800 Suzuki vehicles are assembled annually in Yangon and Nissan is building an assembly plant in Bago, 56 miles (91 km) from Yangon.

“The investment required in local assembly requires a combination of a strong domestic sales base together with supportive government investment policies,” says Ford’s Pease. “At this stage, the size of the market for LHD new cars is small, which makes the business case challenging.”