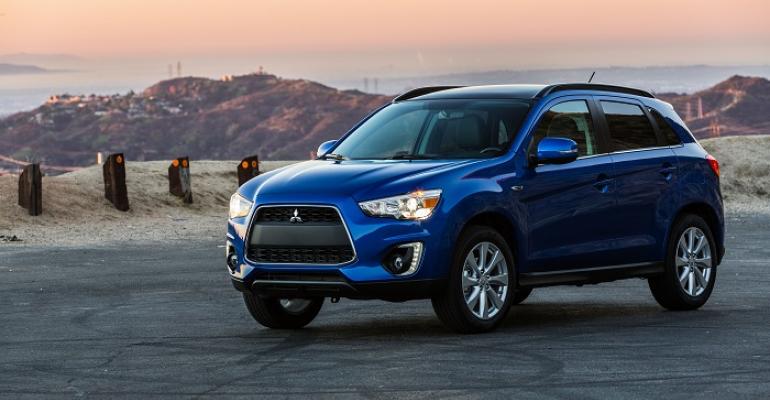 Mitsubishi&rsquo;s U.S. sales chief credits the brand&rsquo;s refocusing on CUVs for its 2015 success, as well as strong deliveries of its Mirage B-car.

“Today we’re seeing a lot of those efforts from having to re-look at our strategy paying off,” Ken Konieczka, vice president-sales operations for Mitsubishi Motors North America, tells media here.

Despite announcing in 2015 the close of its Normal, IL, vehicle assembly plant, which hasn’t been able to find an automotive buyer, Mitsubishi considers 2015 a successful year thanks to the sales performance, led by strong deliveries of its CUVs and Mirage B-car.

A new plug-in hybrid Outlander also is due in 2016 and was here for media to view. However, MMNA execs and spokespeople reveal scant details on the vehicle, including its expected range and pricing. A spokesman does say it will be sold in one well-equipped trim level with leather seating.

The Outlander PHEV, unlike many PHEVs already on the market, will be available in all 50 U.S. states, not just relegated to California and other states that follow California emissions rules. Konieczka says the brand’s U.S. dealers led the push for a 50-state PHEV, believing they could do well with the model.

After weathering some tough years in the last decade, due to fallout from parent Mitsubishi Motors and the former DaimlerChrysler severing a longtime relationship and a disastrous U.S. subprime loan scheme, dealers have a generally rosy outlook on the future, he says.

“Our dealers are also seeing a profit. They’re reporting the highest percentage of profitability that we’ve seen since 2002 from our (360-count) dealer body,” Konieczka says, adding sales per outlet also are at their highest level since 2003.

Mitsubishi’s recent revitalization in the U.S. market means full model changes are on the docket and marketing funds are easier to come by.

Regarding the former, Konieczka promises a production model based on the eX concept CUV from last year’s Tokyo auto show will arrive in early 2018. That model will be classified as a midsize CUV and sit between the next-generation Outlander and Outlander Sport arriving in 2019 and 2020, respectively, The Outlander will grow longer and wider and the Outlander Sport smaller to accommodate the eX-derived model in the lineup.

An all-electric version of the Outlander Sport also is expected to arrive in 2020.

A search for an OEM partner to co-develop the next-generation Lancer C-car “has not worked out,” he says. Mitsubishi had been reported to be talking with Renault-Nissan last year, but Swearingen told WardsAuto in June that it also was starting development on a next-gen Lancer on its own as well, fearing if it couldn’t find a partner it would be “another year behind” on the project.

Konieczka is mum on current Lancer developments except to say the brand is working on a strategy for a successor to the current generation, last all-new in 2007 as an ’08 model.

Meanwhile, Francine Harsini, director-marketing for MMNA, says the refreshed ’16 Outlander’s “100 Spokespeople” ad campaign has been so well-received the brand will continue it this year. It had been slated to end at the close of 2015.

“It really did resonate with the audience,” she tells WardsAuto. “(And dealers) were saying for the first time in years people were coming in off the street from the advertising.” The advertised price of $22,995 for a well-equipped Outlander also was alluring to viewers.

Mitsubishi Aims to Get on Radar With 100 Spokespeople Campaign
Jun 04, 2015