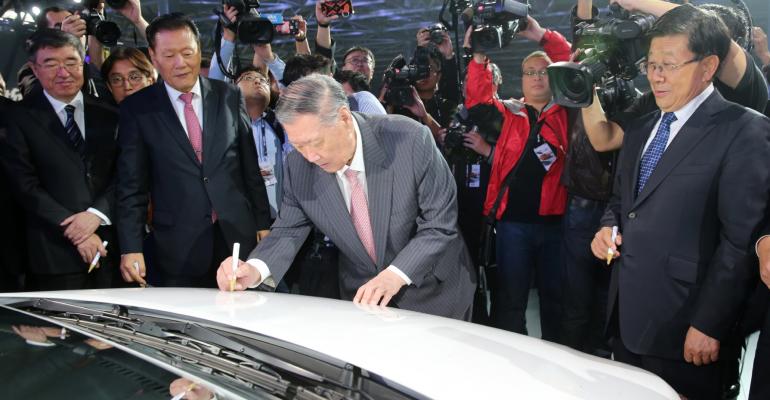 For the first six months of 2017 Hyundai and Kia&rsquo;s combined global sales were down 8.7% from like-2016. Hyundai attributes the fall to nosediving sales in China, where combined deliveries by the Hyundai and Kia joint ventures were down 63% in June and were off 47% for the 6-month period.

Despite apparently making all the right moves, both Hyundai and Kia are suffering costly sales declines in China that are pulling down global performance.

Those right moves include, among other things:

But none of those moves, all beneficial to China, have offset the relentless government-inspired campaign against South Korean vehicles and other products.

China objected strenuously, claiming the new system would upset the strategic military balance in the region. To pressure the South Korean government into canceling plans for the THAAD system it launched unofficial trade sanctions against South Korea by inciting public boycotts of Korean goods, shut down more than 100 Lotte stores and barred Chinese tourists and others from visiting that nation.

When the boycott began in March South Korea was not in a position to pursue diplomatic solutions, or even to lodge complaints with international trade organizations to which the two nations belong.

The then-president of South Korea was being ousted from office on corruption allegations. Her government effectively was hamstrung until she was removed by the National Assembly and a new president was elected in June.

The results of the Chinese consumer boycott would be catastrophic for a company with less financial clout and business acumen than Hyundai Motor Group.

For the first six months of 2017 Hyundai and Kia’s combined global sales totaled 3,518,566 vehicles, a drop of 8.7% compared to the same period in 2016. Hyundai cites nosediving sales in China as a major factor in the fall.

Most of the first-half plunge in China is attributable to steep declines stemming from the boycott in the April-June second quarter.

The fall has been so severe that two Chinese industry groups, the China Passenger Car Assn. and the China Association of Automobile Manufacturers, are withholding sales statistics for the two automakers in line with requests from both companies.

The cooperative response of the two associations is seen by analysts as one being proffered to benefit the Chinese JV partners of the two companies, and not necessarily to accommodate the interests of the Korean half-owners.

Neither Hyundai nor Kia will comment on China sales beyond noting the boycott is a fundamental reason their global sales are plunging.

While there is a new president at the helm in South Korea now, the boycott in China has become a runaway train. Consumers, dealers and marketers are finding ways to cash in on the anti-Korean sentiment.

Dealers of competing brands are offering discounts to customers who cancel their Hyundai or Kia orders. Websites and bloggers openly deplore the South Korean automobiles.

The THAAD missile system has been stalled by the new president, but China has not commented and the boycott was even more severe in June.

President Moon Jae In made the promise to review the THAAD project when running for office because there was public outrage in all the potential areas where it might have been sited. The locals feared it would be a priority target for North Korean missiles in time of conflict, or even before.

In late June the new president ordered a THAAD “environmental review.” That puts actual activation of the system on hold for a year or more.

Whether his move will stop the consumer rebellion in China is questionable. It also runs counter to U.S. desires. It could lead to trouble if U.S. President Donald Trump demands that the current Korea-U.S. Free Trade Agreement be scrapped or renegotiated.

The government-promoted boycott of Korean automobiles and other goods in China comes at a strategically bad time for Hyundai and Kia, when domestic automakers are coming into their own and snatching market share from the global automakers’ joint ventures in the country.

Many of the homegrown Chinese manufacturers have copied global products in appearance but have brought vehicles of much lower quality to market, and offered them for significantly lower prices than the global brands.

Egged on by the wave of “buy China-boycott South Korea” sentiment, consumers are gobbling up inexpensive locally built vehicles, especially SUVs and CUVs.

China’s more sophisticated automakers such as Geely also are getting a boost from the “buy Chinese” momentum, although Geely’s sales were climbing at a heady rate even without it.

Some analysts note that while the sales declines in China are painful and embarrassing to Hyundai and Kia, the effect on their corporate revenue is much less severe.

Both companies have brought much-needed technology and management expertise to China, but are only 50/50 investors with their local Chinese partners. While the two include 100% of their JVs’ sales in their global tallies, they cannot put more than 50% of the JVs’ profits on the corporate books.

Directing consumers away from the Korean brands threatens possible dismantling of Hyundai and Kia’s intricate network of suppliers in China. More than 150 Korean companies reportedly have set up operations in China specifically to serve the two joint ventures.

The suppliers now are operating at 50% capacity or less. There is concern that the Chinese suppliers that also are part of the system may divert their attention to serving only homegrown automakers because of a sustained drop in sales to the Hyundai and Kia JVs.

Also, distributors and dealers who can’t move the Korean-branded vehicles may start looking for products that are more salable.

The boycott is making it harder – some say close to impossible – for Hyundai Motor Group to fully implement its strategy for China.

Hyundai’s fourth plant, just opened in Cangzhou in Eastern China last October, is a good example of the impact of the boycott and of the complexities of trying to do business on a level playing field in China.

The billion-dollar, 300,000-unit plant is something Hyundai Chairman Chung Mong-Koo and his senior officers never really wanted to build.

The Beijing Hyundai Motor JV was well covered in China’s eastern zone, with three plants in Beijing running full-blast (before the consumer rebellion). Cangzhou is just 110 miles (177 km) from Beijing. But that’s where the central government insisted that Hyundai locate its fourth plant, to help the central government’s plan to develop the Cangzhou area.

Chung’s team had set their sights set on building a new plant in Chongqing, a major city 1,100 miles (1,770 km) southwest of Beijing, in a more vehicle-sparse but upcoming area of the country.

But even after asking the president of China to intervene, Chung had to acquiesce and agree to build the Cangzhou plant before the central government would authorize the application for the Chongqing plant, which is expected to open next month as Hyundai’s fifth plant in China.

Chung personally officiated at the formal production launch of the Cangzhou plant in October. Though he had been pressured into building it, he called the factory “a symbol of economic cooperation between Korea and China.”

The plant did have a successful launch. It was on target until the missile row erupted in March.

Production at the Cangzhou plant was halted for one week while Hyundai tried to work through its burgeoning inventory in the face of the sudden, drastic sales reductions caused mainly by the consumer boycott.

Not Giving Up on China, Despite Roadblocks

Facing such complicated, government-inspired handicaps, Hyundai and Kia probably should be applauded for sticking to their strategies for sales recovery and continuing growth despite the boycott of South Korean products in China, all stemming from the placement of a single defensive anti-missile battery.

China is demonstrating it is a tough communist nation that doesn’t hesitate to use tough tactics to reach its political ends – even against companies that have invested tens of billions of dollars in internationally recognized and badly needed currency, provided employment for hundreds of thousands and given China valuable advanced automotive technology and management expertise.

Despite the enormous sales and income opportunities of the past decade, companies that invest heavily and fail to realize the Chinese playing field is quite different from those of the western democracies do so at their peril.

In April, both Hyundai and Kia were blistering from the boycott that began the previous month. Hyundai sold just 35,000 vehicles, compared with 56,000 in March. Kia sold only 16,000 units, about half of April 2016 volumes.

But both companies made bold and full-fledged presentations that month at the Shanghai International Auto Show. Hyundai showed off its upcoming China-specific ix35 CUV, and Kia unveiled its China-specific Pegas compact sedan and K2 Cross CUV.

Already shown at the Guangzhou and Cheongdu auto shows in late 2016, the new Verna (Chinese Accent) subcompact sedan and hatch and the new Celesta (Chinese Elantra) were launched in Chinese markets. The Mistra entry-level compact sedan goes on sale this month, and the ix35 CUV is scheduled for launch in the third quarter.

Despite the anti-Korean sentiment and boycott, Chinese consumers who own Hyundai vehicles gave them top satisfaction ratings – more so than the owners of any other brand of mass-market vehicles (not counting luxury cars).

While Hyundai may seem overly optimistic to many, analysts were told at its June 22 investor presentation that Hyundai’s 2017 sales plan for China still projects 1.25 million sales, a 9.5% increase over 1.14 million in 2016.

Kia likely has similar goals but is facing the same sort of challenge in China.