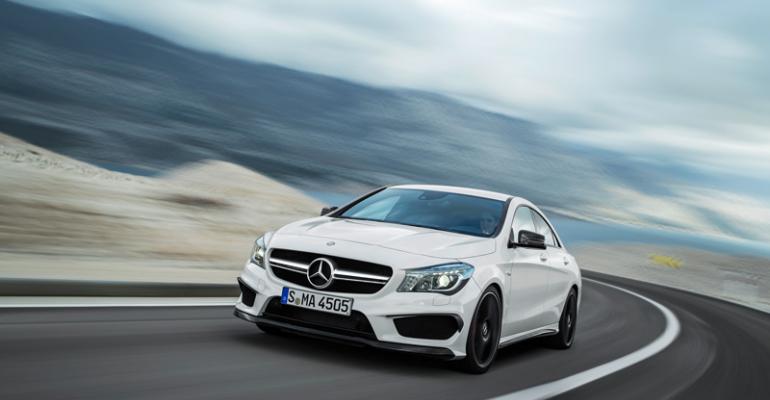 Growth has continued through the early months of this year, although the auto maker declines to release monthly sales reports for AMG models.

"AMG has enjoyed a strong start to the year, and we expect this momentum to continue with the arrival of our 2014 lineup, including the SLS AMG Black Series, E 63, CLS 63 4MATICs and the all-new CLA 45 AMG later this year," Rob Moran, manager-AMG and exclusive vehicles, says.

When the CLA 45 AMG debuts later this year, it will put the performance division within the reach of an all-new market because of its base price of $47,450, the lowest of any model in the exclusive segment.

The low price is expected to attract slightly younger buyers, even though the AMG version costs about 63% more than the $30,000 series-built CLA. That's far more than the premium most customers pay for AMGs.

Car buyers generally pay 40%-45% more for an AMG model, because for some premium car buyers, the Mercedes brand doesn't have enough cachet. “Exclusivity is why customers buy AMGs,” Moran says. “They want the best car that's there.”

Customers are willing to fork over the extra cash because of a desire for high performance and the hand-built craftsmanship that goes into each AMG, he adds.

“AMG cars feel like they've been prepared by a different company,” Moran claims. In fact, AMG models are built in an exclusive facility in Germany. The CUV models built in Mercedes’ Alabama plant are an exception.

The auto maker began making AMG versions of these vehicles at its Tuscaloosa, AL, factory in December 1999. The ML 55 was the first high-performance model produced there, with a hand-built engine shipped from Germany.

Each AMG engine is produced by a single worker at the Affalterbach, Germany, plant, except for the CLA45 4-cyl., which is produced at the Kolleda plant near Berlin.

“That's a big attraction,” Moran says, noting every engine part has a barcode that's scanned before it goes into the engine. The entire AMG vehicle can take four to six weeks to build.

Many AMG customers in Europe travel to the performance division's headquarters in Affalterbach for delivery of their cars. Even some U.S. buyers pick up their vehicles there, because they like to drive them on German highways and visit the AMG museum, he says.

Some 81% of AMG vehicles are purchased by men, but women buyers are moving up with some models. AMG customers are more affluent than Mercedes buyers, with a median family income of more than $400,000. That’s more than double the median income of series-built Mercedes buyers.

Southern California is among the biggest markets for AMG sales, along with South Florida, the Northeast and Texas. Some Mercedes dealers maintain an AMG performance center, a specialized point of sale in the stores.

Sales personnel receive dedicated training in order to explain to customers what makes an AMG special technically. Only 120 out of the 360 U.S. Mercedes-Benz dealers participate in this program.

AMG was founded in 1967 by Hans Werner Aufrecht and Erhard Melcher as a performance-tuner firm. It enjoyed success in racing while also creating high-performance versions of production cars. In 1990, AMG signed a cooperative agreement with Daimler-Benz and produced the C 36 AMG three years later, its first jointly developed vehicle.

In 2005, Daimler purchased AMG outright, but the performance division still operates independently. Its headquarters are located about 25 miles (40 km) from Daimler in Stuttgart.

Otto Kallenius, chairman of Mercedes-AMG, says eventually there will be a total of 30 AMG models.

Mercedes CLA, Infiniti Derivative to Be Built by Nissan in Mexico
May 24, 2013