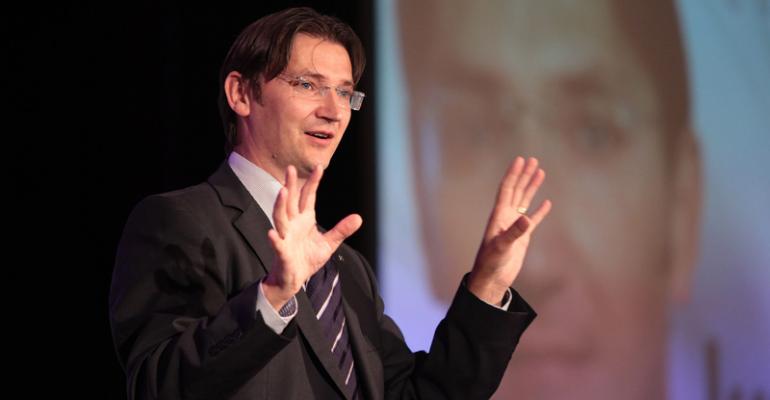 What all drivers have in common is a need to feel connected to their vehicles, but they also demand not to be distracted by them, a top executive says.

DEARBORN, MI – A top Mercedes-Benz executive dispels the notion of keeping up with younger drivers’ habits and instead notes that keeping pace with changing trends in user apps is the bigger challenge.

Speaking to reporters here at the 2013 WardsAuto Interiors Conference, Mercedes-Benz Research and Development President and CEO Johann Jungwirth says flexibility is the key to maintaining the relationship between Silicon Valley and the auto industry.

“The ecosystem of the car industry is quite small,” he says. “It’s more about adapting to (developers) and their concepts.”

Mercedes believes it has its bases covered for courting drivers of all ages, from the so-called Millennials to the older Baby Boomers and beyond. “This whole notion that younger people aren’t interested in cars anymore, we have a lot of information, a lot of data from society and technology research that shows it’s not true,” Jungwirth says.

What all drivers have in common is a need to feel connected to their vehicles, but they also demand not to be distracted by them, he says.

Mercedes uses a cloud-based system to integrate third-party apps such as Google, Yelp and Pandora into its vehicles. The system also seamlessly weaves in mBrace, the luxury marque’s longtime telematics system and other Mercedes apps.

For the ’14 S-Class sedan, the auto maker is introducing Mercedes-Benz Touch, a smartphone app that allows drivers to pre-condition climate controls, adjust sound levels and perform other functions remotely or while in the car. That technology could spread down the line, Jungwirth says.

“With the cloud connection, we have a huge step forward,” he says. “We started with three apps in 2011. We are now at 20 apps, and basically able to offer all of these apps to all the customers in the field. Everyone who bought a car is able to get these as part of their base package.

“With the smartphone integration, that’s the second path of flexibility,” he adds. “You adapt to the latest and greatest ‘what’s hot’ content.”

Using a cloud-based system enables easier updates of apps, whether developed by Mercedes or a third party. ”We are able to push, on a monthly basis, information to the car as the car is in the customer’s hands.”

The cloud-based system also takes the burden off independent developers to tailor their offerings to Mercedes vehicles, Jungwirth says.

“We are very flexible. We adapt to any (application-performing interface) out there,” he says.

During a presentation to attendees here, Jungwirth emphasizes a customer-focused mantra for telematics development.

“One thing customers will not accept is that your car is outdated as soon as it’s shipped,” he says. “We need to find ways to have much more flexible architecture overall.

“It’s a good challenge to have, but I see quite a few solutions arising that we can do a much more seamless integration and create a user experience that really minimizes the workload on the driver.”

Jungwirth leans slightly toward autonomous driving by mentioning some telematics development centers on hands-free operation, but declines to say if – or when – driving autonomously could take hold fully.

“We prefer not to talk about timing, but you can see the technology’s on the road today,” he says.

Jungwirth does say Mercedes is experimenting with augmented reality, in which a digitally enhanced view of the road ahead is displayed on a screen in the center stack.

“It almost feels like a huge touchscreen, except you’re not touching anything – you’re just pointing at the screen,” he says of the display that also would be used to control vehicle functions.

Consumer feedback on apps and infotainment systems is gathered through sales data, download trends, focus groups and direct input from vehicle owners. Drivers are invited to contact Mercedes about what they’re using, a process that allows the auto maker to talk directly with its customers and not rely on feedback from dealers or other middlemen.

All of that data is processed and analyzed at a hub in Palo Alto, CA, in the heart of Silicon Valley. Software developers work with market-specific engineers in other countries, particularly China, a growing tech-savvy base.

More than 100 markets depend on Mercedes’ connections in Silicon Valley, and Jungwirth says it’s preferable to be located there near juggernauts such as Google and Yahoo rather than the auto maker’s home base in Germany.

“They’re all there,” he says. “It has been a good success for us, and also having the mindset that app development has to be quick to market. It cannot be a 3- or 4-year kind of traditional embedded-software development cycle.

“And we have the right kind of talent – having that talent, and the talent having that mindset.”