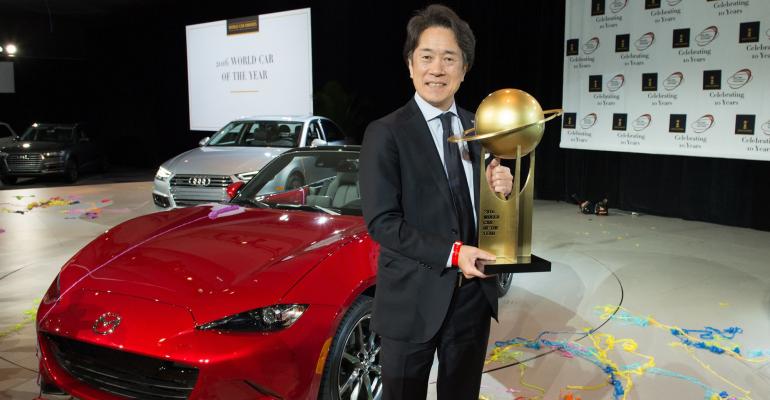 Unfortunately Mazda&rsquo;s brilliant SkyActiv-D diesel engine does not appear to be on the U.S. roadmap, because emissions modifications would compromise performance too much.

DETROIT – Club racing on a team with other Mazda executives is one of the experiences Masahiro Moro, the company’s new CEO of North American Operations, will draw on as he hones the brand’s identity.

But it’s not easy to be an automaker, even in good times. New vehicle sales and production have been soaring to new heights in North America, but the rising tide has not lifted all boats.

Automakers with product mixes favoring cars rather than trucks and CUVs have seen sales and market share drop. And even though truck-rich automakers such as General Motors and Ford are raking in record profits, their stock prices are languishing because Wall Street thinks the auto boom has just about peaked.

The future looks especially daunting for small automakers such as Mazda that need to invest billions in new technology to meet tightening fuel-economy and emissions rules while simultaneously loading up vehicles with advanced driver assist and connectivity systems.

Moro recognizes the concerns as he unveils a lean, no-frills plan for long-term survival for the automaker, which has just 1.5 million global sales and is looking for incremental volume gains, not easy shortcuts to prosperity.

Part of the game plan follows the same path as many competitors, namely improving margins and residual values, rather than relentlessly chasing sales volume. Mazda is emphasizing retail sales over fleets and shifting its product mix to fewer low-profit cars and more CUVs.

That plan will be put to the test with Mazda’s handsome new CX-9 7-passenger CUV that hit dealer showrooms in late June. The vehicle scores well with reviewers, but the automaker’s small retail network and limited ability to pile on cash incentives places it at a disadvantage against giants such as Nissan and Toyota.

So far, initial CX-9 sales are promising. Transaction prices are up $10,000 compared with the outgoing model, a spokesman says.

Mazda historically has made vehicles that were among the most stylish and performance-oriented in their class, with sophisticated exterior lines and finely crafted interiors. But Moro candidly admits the automaker previously overestimated its ability to extract premium prices in mainstream segments and hold onto customers through multiple purchase cycles.

“Mazda has not been good at retaining customers,” he says. “People tend to move on.”

Much of the new focus will be on working with retailers to build strong long-term service relationships with customers after the sale and helping them understand and take advantage of all the vehicle features, Moro says.

Part of that strategy involves selling higher-trim, better-equipped models rather than lower-end strippers that tend to discourage repeat buyers. Moro says that while selling upscale models is a key objective, the company has no plans to revisit its past attempt to create a luxury channel, and adding any all-new products at the Mazda brand’s upper end is not a near-term objective.

And even though pickup trucks are all the rage in the U.S., Mazda has no North American import plans for the new BT-50 midsize pickup replacement it will get from Isuzu in Thailand beginning in 2018.

Moro says the brand plan leverages Mazda’s considerable strengths in product design and powertrain engineering. Mazda lays claim to building a mainstream gasoline engine with the highest compression ratio, (13:1 in the U.S., 14:1 in Europe), which translates into more power and efficiency, and a diesel engine with the lowest compression ratio, which results in lower emissions of smog-causing oxides of nitrogen.

So it should not be too surprising that he proudly and firmly states that internal-combustion engines will carry the company forward for the foreseeable future, with only minor electrification down the road.

Powertrain costs will be minimized by standardizing ideal combustion and part characteristics to improve economies of scale, similar to BMW’s strategy of creating one perfect cylinder size that fits all its engines. Moro says Mazda will prioritize driver-pleasing torque over horsepower in its second-gen SkyActiv engines expected before the end of the decade.

Unfortunately Mazda’s brilliant SkyActiv-D diesel engine does not appear to be on the U.S. roadmap, even though it is enormously popular in other markets.

Moro won’t officially rule out the prospect, but he says grimly at a recent dinner with reporters that the modifications necessary to meet U.S. emissions requirements would compromise performance too much.

He also points out the business case for diesels in the U.S. for a low-volume seller such as Mazda is not compelling, especially in the aftermath of Volkswagen’s Dieselgate.

About 66% of Mazdas sold in Japan are powered by SkyActiv diesels because Japanese consumers like the diesel torque and efficiency. But diesel fuel also is substantially less expensive than gas in Japan, unlike the U.S. he says.

For the near term, Mazda does not intend to race into autonomous cars or make big investments in car or ride sharing. It views itself as a niche producer of driver’s cars and appears content to leave the autonomous stuff to others for the foreseeable future.