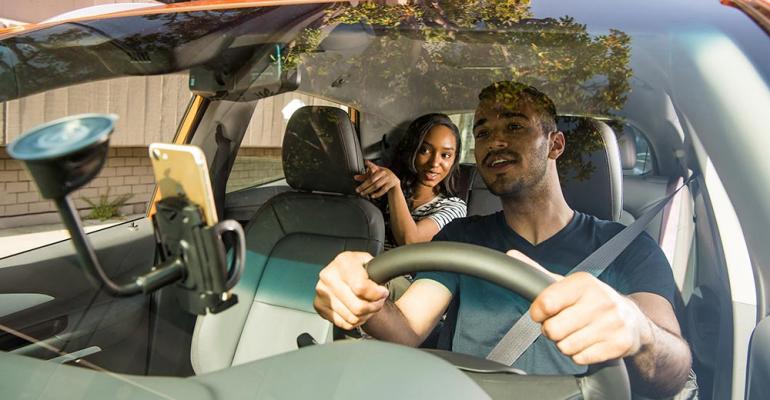 Julia Steyn, who heads the Maven transportation services unit at General Motors, says the 18-month-old startup is growing its consumer base and revenue at a tenfold pace each month.

Steyn, vice president-Urban Mobility and Maven at GM, stops short of providing more detailed financial figures, but adds, “Every dollar GM invests in Maven it gets a return on.”

Maven provides on-demand, short-term rentals of GM vehicles to residents in 17 U.S. metropolitan areas. Users download the Maven software application to their smartphone or mobile device, set up an account and can call up available rentals in their area. The push of a button puts them behind the wheel.

The service also offers the Detroit automaker’s vehicles to residential communities, which is where Maven got its start, as well as commercial entities. Its Maven Gig service supplies on-demand rentals to the sharing economy, such as people looking to make an extra buck providing rides through Uber or Lyft, or on their own.

Maven Gig users also are delivering packages to people personally and through online businesses such as Grubhub food takeout, Instacart grocery delivery and HopSkipDrive, which provides parents with rides for their children or the elderly.

Maven now boasts a fleet of 7,000 cars and trucks that have traveled enough miles to circle the globe 7.5 times, Steyn tells an investment community conference in New York. The conference was webcast over GM’s investor website.

The fleet is expected to include 1,000 Chevrolet Bolt battery-electric vehicles as GM fills Maven’s orders in the coming months. The 136 Bolts put into service over the first half of the year have logged 1.85 million EV miles (2.8 million km).

“It is pretty incredible,” Steyn says of Maven’s growth, calling the Bolt an “ideal vehicle” for the service.

Every Bolt in the fleet gets used and they average 150 miles (241 km) per day, she says, and on the Maven Gig side of the business the EVs rarely come out of service.

“People using them for Gig aren’t bringing them back,” she jokes.

Bolts in the Maven fleet are giving GM and the communities where they operate rich data on user patterns, Steyn says, which the automaker and municipalities use to locate future fast-charging stations.

In the Los Angeles and San Francisco metro areas there are about 200 fast-chargers, which can replenish a Bolt with up to 90 miles (145 km) of range in 30 minutes. Steyn says GM thought Maven would use all of the fast-chargers with its Bolt fleet, but recently discovered just 20 were being utilized regularly.

Steyn, who joined GM in 2012 to lead its M&A business before launching Maven, is passing that sort of information on to civic leaders. GM sees the information exchange as vital to building out a charging infrastructure.

“We know where we need it (and) we need fast-charging or (EVs) won’t work in this ecosystem,” she contends. “We can help cities intelligently build out the infrastructure.”

Steyn likes the idea of autonomous vehicles someday joining the Maven fleet, but warns such a decision will not be made from Detroit.

“The concept of (autonomy) is exciting,” she says, with the caveat, “All of these technologies are answers to consumer demands. That’s what we are driving after.”

Steyn says Maven’s growth has come mostly on the back of digital marketing and word-of-mouth through social media. She says 75% of customers are Millennials, or people in their early 20s and 30s, and most do not own a vehicle.

But possibly bringing those customers into the GM ownership world is an important role for Maven, and the unit runs programs such as a current Chevy Equinox test drive to familiarize Millennials with the newly redesigned 5-passenger CUV.

“People under 30 in New York City have never thought about an Equinox, or a (Chevy) Cruze or a Bolt,” she admits.

Steyn refutes comparisons of Maven to Zipcar, a car-sharing unit of rental-fleet operator Avis, asserting no entity along the transportation chain shares its sweeping strategy.

“No one is looking at this holistically,” she offers, calling Maven a clear break from the traditional 3- to 5-year ownership cycle to one where transportation is consumed daily. Building that business is a challenge because elements such as marketing, demographics and business infrastructure are markedly different.

“And we are out there every day, comprehensively building out this capability,” she says.

Steyn reports the Maven team has grown to 100 employees on the operational side of the business, with another 80 software developers. The team continues to be a diverse one, she adds, with some coming from GM and others from outside companies such as Car2Go, Google and Starbucks with backgrounds ranging from analytics to finance.

They are relatively young, too, she notes, which sometimes can present a challenge.

“You have to be open to a 20-year-old yelling at you, telling you that’s not right,” she says.