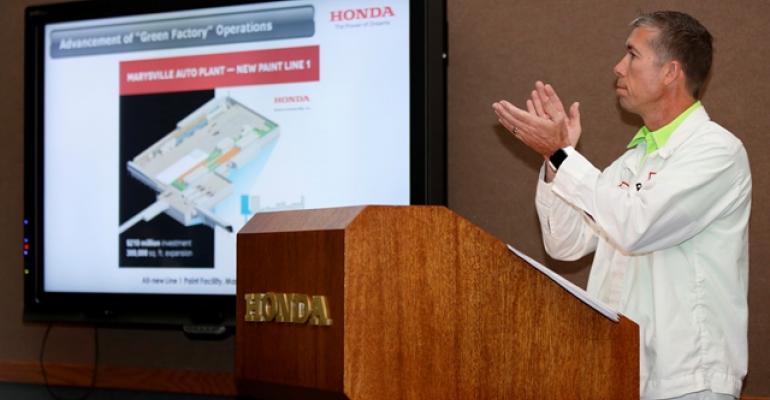 Marysville Gets New Coat of Paint

Honda&rsquo;s new paint line, ready in 2017, will use waterborne primer (replacing a solvent-based coating) and requires no sanding or baking of the primer coat. The new &ldquo;Line 1&rdquo; incorporates two baking processes in between coats, instead of three previously.

MARYSVILLE, OH – Honda, an automaker that prides itself on earth-friendly technologies in its cars, product development and showrooms, announces plans for a new paint shop at the massive assembly plant here that builds about 440,000 cars a year, mostly Honda Accords.

Construction as part of the $210 million investment will begin in December and take two years to complete. The plant currently has two paint lines, one dating to 1985 and another that was renovated in 2006.

The older line used a solvent-based primer and will be replaced by an all-new “Line 1” that uses waterborne primer and requires no sanding or baking of the primer coat. The new system incorporates two baking processes between coats, instead of three previously.

Honda engineers say the changeover from the old paint line to the new one will be seamless, and that there will be no interruption of the 1,000 vehicles painted daily at the plant, split between the two lines. The cycle time to paint a car will be unchanged, at about 52 seconds.

Eliminating water necessary to capture paint particulates will eliminate paint sludge as a waste byproduct, resulting in the elimination of more than 255 tons of sludge, one of the few remaining landfill waste streams in the manufacturing process.

Honda says the new line in Marysville will represent the highest-volume application of dry-booth automobile painting in North America.

May says management has not yet decided how to use the space. “We’ve got a long list of things we’re planning to use it for,” he says.

The plant has two vehicle assembly lines – one for 2- and 4-door Accords and the other for Acura TLX and ILX sedans, as well as 4-door Accords. The Accord makes up about 70% of the mix. The new paint line will use a 2-component urethane clearcoat on the Acura models.

The new painting operation will be the latest in several initiatives to reduce carbon emissions and water consumption throughout the plant.

Fluorescent lights have been replaced by LEDs in vehicle-assembly areas over the past year, and recycling efforts have been stepped up to include 3.2 million lbs. (1.4 million kg) of cardboard, as well as oil, antifreeze, light bulbs and scrap steel and aluminum.

A parts-distribution center was added to the plant in January to accommodate shipping docks to receive 3 million parts from suppliers each day.

The operation saves energy by using LEDs overhead, radiant dock heaters and 51 hydrogen-powered industrial vehicles, including 19 forklifts. Sixteen vehicles that used to run on battery power have been converted to fuel cells.

The combined efforts have cut CO2 emissions at the plant by 8.3 lbs. (3.8 kg) per vehicle produced. Multiplied by the 440,000 vehicles assembled annually, that amounts to enough energy to power an average American household for 129 years.

Plant manager May says the new paint shop will be the pride of the manufacturing operation. “This is a major investment in our capabilities at the Marysville plant to advance its state-of-the-art environmentally responsible production capabilities,” he says.