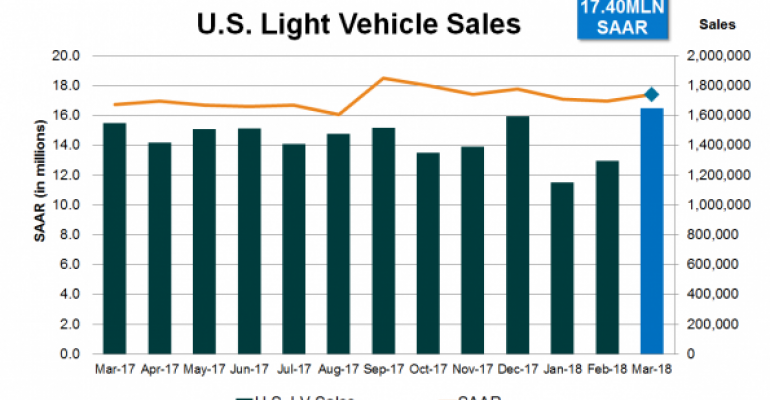 Except for CUVs, cracks started developing in Q1 in several truck segments, especially in the big-truck sectors.

The SAAR was the strongest since December’s 17.8 million units, and well above year-ago’s 16.7 million. Because March had 28 selling days, including an extra weekend, compared with like-2017’s 27 selling days, volume soared to 1.647 million units from 1.548 million last year.

The month’s daily selling rate increased 2.6% from same-month 2017 to 58,831, and was the first year-over-year increase since November.

Based on initial estimates for the month, both retail and fleet volume increased over year-ago.

Job and wage growth, as well as general confidence in the economy, certainly played a part in the month’s results. However, with interest rates rising, fuel prices up, stock market volatility and an overall lack of excess replacement demand, rising incentives also likely played a strong role.

ALG estimates average incentive spending increased 5.5% in March from like-2017 and 2.6% from February.

A better product mix vs. year-ago also was a positive for March’s results.

Last year, CUVs, the biggest segment group, accounted for 29.4% of dealer stocks heading into March. This year 34.5% of inventory was composed of CUVs.

Trucks in total had been the backbone of growth in 2017, and were up 11.7% year-over-year in March and increased 9.6% in Q1. But other than CUVs, cracks started developing in Q1 in several truck segments.

Due to an aging product mix, big trucks - fullsize pickups, SUVs and vans – in general continue to show weakness. Furthermore, midsize SUVs were down (5.3%) year-over-year a third consecutive month, and the Small Pickup segment, despite hefty growth in Q1, is showing some fault lines.

Other segments that are doing well are small-volume sectors, such as Small SUV, Large Luxury SUV and Luxury Specialty Car, which are being led by a few new products.

Some automakers that recorded gains in March also can attribute, at least partly, their boosts to a fresh-product mix, including General Motors (up 11.6%), Jaguar Land Rover (6.2%), Mazda (30.8%), Tesla (51%), Volvo (48%) and Volkswagen Group (8.9%). However, increased incentives and higher fleet deliveries also likely influenced positive outcomes at some of those automakers.