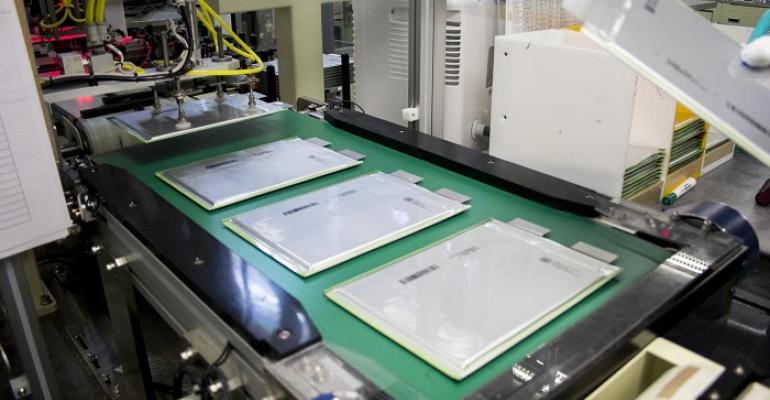 To showcase the all-hands-on-deck nature of current operations and give some insight into the second-gen Volt&rsquo;s lithium-ion cells, the Korean battery giant opens Holland&rsquo;s doors to the media for a rare tour.

HOLLAND, MI – Until recently the LG Chem battery plant here, which opened in 2011 with $151 million in funding from the Recovery Act, wasn’t at full capacity, which led to infamous stories about workers with a lot of free time on their hands.

But now with production under way for the second-generation Chevrolet Volt, plus supplying lithium-ion cells for other General Motors models including the Chevy Spark EV, Cadillac CT6 plug-in hybrid and ELR range-extended EV, LG Chem Holland is running full tilt.

“For the capacity we have installed, it is fully utilized,” Nick Kassanos, president and plant manager says of his three assembly lines, which are running three 8-hour shifts, six days a week.

To showcase the all-hands-on-deck nature of current operations and give some insight into the second-gen Volt’s Li-ion cells, which increase the car’s electric range to 53 miles (85 km) from the first-gen Volt’s 38 miles (61 km), the Korean battery giant opens Holland’s doors to the media for a rare tour, providing an overview of its processes.

Before the tour of the highly automated facility can proceed, media first don clean suits, rubber shoes and hair nets to preserve the plant’s cleanliness and assure no dirt or dust sullies the cell-making process.

Until last year, LG Chem shipped electrodes to Holland from its sister plant in Ochang, South Korea. Now it is making them in-house here, which is where the cell manufacturing process begins.

A slurry mixture is created out of raw material: lithium, sourced from Korean, Chinese or Japanese suppliers, and a solvent for the cathode and carbon, unspecified binding materials and water for the anode.

The slurry gets coated onto sheets of aluminum or copper, which become the anode and the cathode.

The sheets are made into jumbo rolls, pressed to the appropriate micrometers of thickness that will increase their conductivity and capacity.

Kassanos notes this process still is running on two shifts as it ramps up, not three like assembly.

The rolls then move into a slitting area, where they are cut into one-third-sized doughnuts, roughly the width of the Li-ion cells for the Volt. Here they are monitored for surface defects. If a defect is found, the cell is tagged with a green sticker for removal down the line. 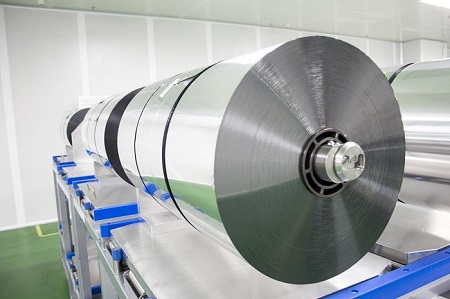 The smaller rolls then go into notching machines, using a die-and-punch system, to form the shape of the electrodes.

With GM now at full production of the ’16 Volt, the fully automated notching area is running 24 hours a day on three shifts.

During notching, the electrodes are monitored continuously for the appropriate dimensional accuracy via a digital camera, which can pick up slight variations from one notch to the next.

Once notched, electrodes move into a vacuum dry room, where they are heated to remove moisture.

Then they are checked to ensure dryness, as moisture is detrimental to their proper operation.

Electrodes exit the vacuum dryer and enter the lamination process. Here three electrodes, either two anodes with a cathode in the middle or two cathodes with an anode, as well as two separator layers, are united via heat and pressure in a five-layer sandwich or bicell. Seventeen bicells placed into two groups make up one second-gen Volt cell, up from 13 bicells and three groups with the first-gen Volt.

The separator material is a base film coated with a proprietary ceramic and has the feel of a garbage bag, says Aaron Svacha, manager of the plant’s assembly area.

In this process, LG Chem also is using cameras to assure dimensions are to specifications.

Blowers and suction are used to remove metallic particles on bicells, which are folded and placed in a pouch that is sealed on three sides.

The top side of the cell is left open for the wetting process, wherein a small of amount of electrolyte, an unspecified liquid, is injected into the pouch.

Svacha says the small amount used, as well as cell absorption of the material, assures the electrolyte won’t pool in the bottom of the pouch.

Vacuum sealing of the pouch is the next step in the cell formation process and also helps evenly distribute the electrolyte.

Then another quality check is performed, with workers accepting or rejecting completed cells.

A large flap, left at the top of the pouch for charging, discharging and aging processes before shipping, will get trimmed off later.

Finished cells are packaged into a tray then sent to the formation room, the initial step in the aging process. It’s there where they spend most of their time, 30 of the 37 days they’ll stay in Holland.

“This is where we bring the cell to life,” Steve Zachar, formation manager, says of the first of many post-assembly steps.

Initial aging is where the electrolyte gets fully wetted throughout the cells.

Then cells are taken to a nearby room for initial charging, where they are placed into charge boxes that can hold 15,000 cells each.

The cells then go upstairs to spend two to six days in a de-gassing room, where the pouches are punctured in a vacuum chamber, gas is pulled out and voltage resistance, cell weight and visual dimensions are checked.

Cells are discharged and charged again before ending up in a shipping aging room, a massive space where they are stacked floor to ceiling on racks for a minimum of 14 days. At day seven, cells are opened to check current and voltage, a step that will be repeated at day 14, Zachar says. 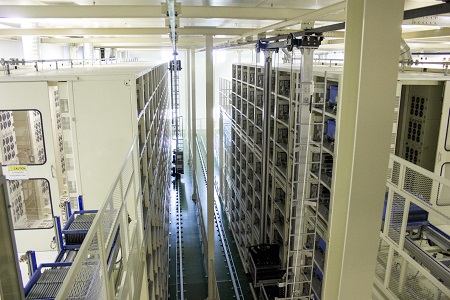 When cells are ready to leave the Holland plant, they arrive at the end-of-the-line area, where again a visual inspection is performed. Then they are loaded on a specialized pallet that is covered and trucked on a just-in-time basis to GM’s Brownstown Twp., MI, plant south of Detroit. There they are grouped into modules, placed in the Volt’s T-shaped pack and control systems are attached.

The plant recently added 100 employees, bringing total employment to 318. It has plans to hire 70-90 workers, including operators, engineers and supervisors, in the next six months for a fourth line being installed for an unnamed customer.

As LG Chem trains operators in-house, no specific technical requirements are needed of those applicants, but engineers are preferred to have a chemical- or electrical-engineering background.

Kassanos says the majority of new hires here were to satisfy the increased volumes for the Volt, but some are for the unnamed customer.

He is mum on whether the fourth line is to supply Li-ion cells for the forthcoming Chevy Bolt EV, as has been widely speculated, but other LG Chem and GM officials here say the customer is not GM.