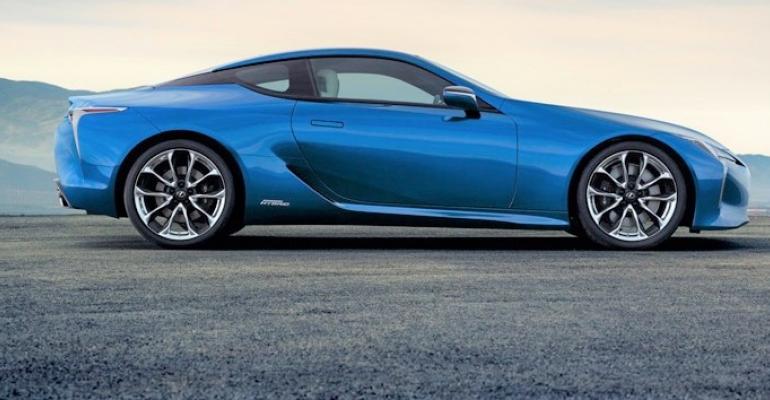 Lexus Will Field Entry CUV But Avoid A, B Segments

“I would say that we would eventually have an electrified option,” says Jeff Bracken, executive advisor to Toyota North America’s Lexus Div. “It could be a plug-in hybrid, an EV or a fuel-cell vehicle.”

NEW YORK – It’s been a big year for Lexus. The Toyota luxury brand is completing the rollout of 17 new products in 2018 and is on track to achieve record sales.

Those new products include the Structural Blue Edition of the LC coupe series; 2-row versions of the LX, RX L and RX L hybrid series; and the new UX and UX hybrid CUVs.

Global sales, nearly half in the U.S. where the brand debuted 29 years ago, are expected to top last year’s record of 668,500.

Among Japanese luxury brands, Lexus easily ranks No.1, outselling both Infiniti and Acura more than 2-to-1 in the U.S. market. Lexus represents about 11.5% of all Toyotas sold in the country.

Jeff Bracken, recently named executive advisor to Toyota North America’s Lexus Div. as he prepares to retire in August, shares his views on the brand in an interview with WardsAuto.

Bracken: We’re around 300,000 of 2.4 million (Toyota) vehicles sold. We will absolutely work to improve mileage through additional hybrids in our product mix and to improve CAFE together with Toyota.

WardsAuto: Can we expect a pure-electric model in the lineup?

Bracken: There has been no official announcement, but I would say that we would eventually have an electrified option. It could be a plug-in hybrid, an EV or a fuel-cell vehicle.

WardsAuto: So might we see a Lexus version of the fuel-cell-powered (Toyota) Mirai when it goes through a model change in 2020?

Bracken: Without specifying a particular model, there is a chance of a future fuel-cell-powered Lexus, although the timing of that announcement has not yet been determined. All I can say is, stay tuned.

WardsAuto: Is Lexus planning anything in the A and B segments?

Bracken: We have no plans to go down below $30,000. Toyota can cover that price range for us. We also don’t see any value in having a lineup as deep as Mercedes-Benz and BMW. Their model lineup is twice as deep as ours. We also think (moving into the A and B segments) adds a level of complexity for the salesperson on the showroom floor. We think there are efficiencies in keeping our lineup as simple as possible while being in the segments we need to be in.

WardsAuto: Toyota currently produces the ES series sedan in Georgetown, KY, and RX crossover in Cambridge, ON (Canada). Both models are also produced in Japan. Will there be more North American (-built) models? Bracken: It is important for us, whether Lexus or Toyota, to manufacture cars in the markets we sell them. Right now, the ES and RX account for about half of our volume in the U.S. We import the balance from Japan. We continually evaluate those possibilities as we look at our complete lineup. But we have nothing to announce today.

WardsAuto: How many models are in your lineup and what segments are you looking to enter?

Bracken: We’ve got more than 20 models not counting the UX. But it gets complicated depending on how one counts. For instance, do you count L models (which are longer and have a longer wheelbase, such as the RX and RX L) as separate models?

But back to your question, we are still not in the entry compact utility vehicle segment. That will be the UX and will be priced under NX. (The model is scheduled to go on sale in December in the U.S.) We also displayed a Lexus LF-1 Limitless Concept, above the LX, at the (2018) North American International Auto Show. Those are a couple of gaps we’re trying to fill.

WardsAuto: How does Lexus differentiate between Mercedes-Benz and BMW, the two marquee brands you compete with?

Bracken: The DNA of our company is quality, reliability, dependability and safety. Our definition of luxury starts there. With that, our Lexus covenant is that we will deliver premier customer care. Our 240 Lexus dealers in the U.S. understand that.

Lexus Hopes JM Participation a Boon to Plus Program
Mar 15, 2018