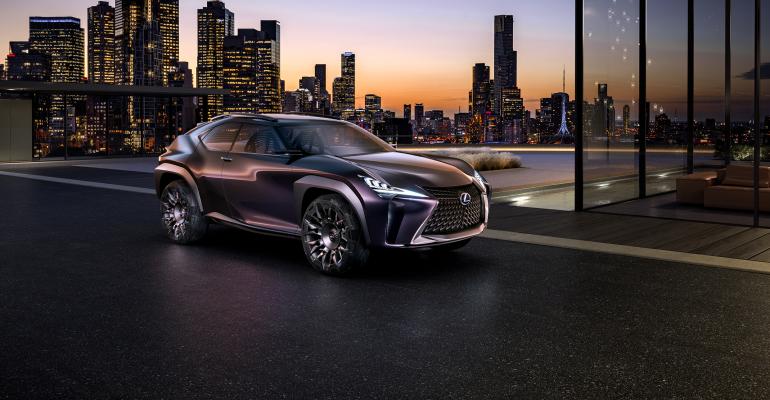 Geared toward Europe, the diminutive Lexus UX concept is expected to be revealed as a production model at March&rsquo;s Geneva auto show.

With the CT 200h entry-luxury car discontinued, and the strong popularity of utility vehicles, Lexus is making its case to parent Toyota for bringing the UX, introduced as a concept at the 2016 Paris auto show, to the States.

“Our dealers are all over us to produce that concept vehicle,” Jeff Bracken, general manager-Lexus Div. for Toyota Motor Sales U.S.A., tells WardsAuto during a roundtable interview at the Los Angeles auto show.

“We’re in the process of helping our company understand what we’re leaving on the table” by not having an entrant in the burgeoning small-luxury CUV segment, he says.

A production version of the UX, said to be a subcompact rather than a compact CUV, will debut at March’s Geneva auto show, LexusEnthusiast.com says via a translated report from Spanish website Motor.es.

While their collective volume is meager – 99,785 units sold through November – small luxury CUVs have been one of the fastest-growing segments in the U.S. this year.

WardsAuto’s Small Luxury CUV group rose 52.1% in the period largely due to three models: the all-new Chevrolet Bolt and Infiniti QX30, as well as the BMW X1.

Infiniti’s all-new QX30, riding on the Mercedes GLA platform, accounts for an estimated 13,542 of the segment’s tally. (Due to technical glitch, Nissan will not report November sales until later today.)

Lexus dealers were the force behind getting a 3-row version of Lexus’ popular midsize RX CUV to market. The brand revealed the model here at the auto show and plans to begin retailing it late this year in the U.S.

Bracken sees the 3-row RX as stemming the flow of Lexus owners to other luxury marques that have such a vehicle.

“We’ve certainly lost business to our competitors that have a 3-row (CUV) in that segment and we obviously are trying to re-interest them in us…Every year that went by it was making it more and more difficult to bring some of those lost folks back to us,” he says of why Lexus, after years of discussing a 3-row RX, finally had to pull the trigger.

Having said that, Bracken expects some RX L sales to be incremental, not entirely 2-row RX owners trading up to the new 3-row model.