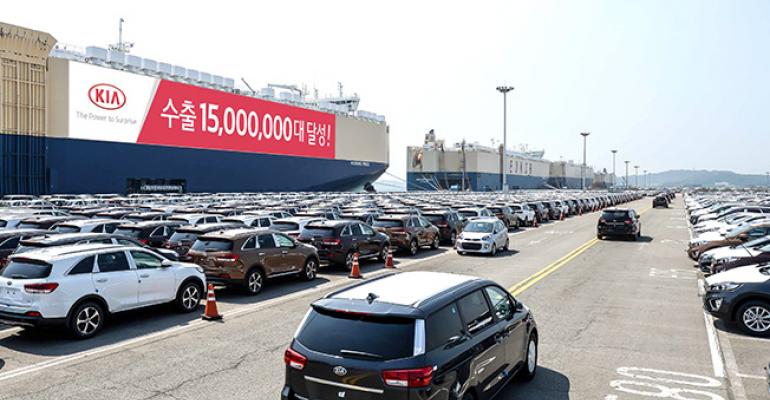 A Kia spokesman says the automaker is pleased to have reached the accord after 16 bargaining sessions without losing any production to strikes. Workers had approved strike action Sept. 16, but union leadership never called for a walkout.

Kia workers represented by the Korean Metal Workers Union sign a new wage agreement with the automaker Jan. 12, ending negotiations that dragged on for five months.

Both sides had agreed when talks began Aug. 11 to conduct all sessions with a total news blackout. A tentative agreement was reached Jan. 6 and a ratification vote was held Jan. 10. Of 28,514 of Kia’s 31,091 union workers who voted, 64.3% approved the new deal.

The Kia wage package largely mirrors the agreement reached in late December by Kia’s sister company Hyundai and the Hyundai branch of the KMWU.

A Kia spokesman says the automaker is pleased to have reached the accord after 16 bargaining sessions without losing a single hour of production to strikes. Workers had approved strike action Sept. 16, but KMWU leadership never called for a walkout.

The new Kia agreement permits management to implement a wage-peak system for managers, with a 10% wage reduction at age 59 and another 10% reduction at age 60, but it does not apply to workers beneath the manager rank.

However, union negotiators say extending the wage-peak system to cover all workers would be an issue in 2016 wage negotiations.

The wage-peak system is structured the same way as in the agreement signed by the Hyundai branch of the KMWU. Unlike Kia, Hyundai did lose production to strike action during seven months of negotiations that followed the first meeting June 2.