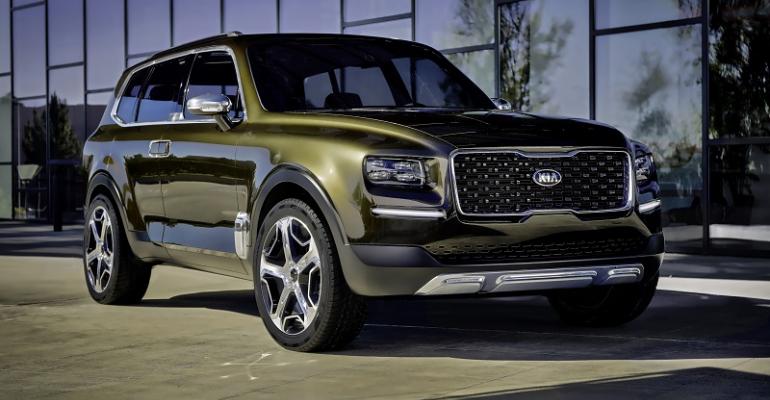 Kia: Announcement on Telluride Due as Sportage, Sorento Decline

Kia is expanding its utility-vehicle lineup after coming off a year when it lost sales in the key sector.

The brand will “have some announcements soon” on a production version of the 7-passenger Telluride large CUV concept from the 2016 Detroit auto show, Kia Motors America’s Orth Hedrick, vice president-product planning, tells WardsAuto. ”Stay tuned for more details,” he says in an interview.

Sister-brand Hyundai also is expected to launch a new large CUV, expected in 2019 as a ’20 model.

For Kia and Hyundai, whose R&D is joint, it will be something of a return to form. Both brands fielded large utilities roughly a decade ago in the U.S. Kia offered the body-on-frame Borrego and Hyundai the unibody Veracruz. The Borrego lasted just two years until it was discontinued in 2010, with the second-generation Kia Sorento CUV filling its void.

Now in its third generation, the midsize Sorento offers three rows of seating, but for some buyers it doesn’t have enough cargo space, Hedrick says.

“We see a growing need in our portfolio with buyers who are maybe in the second or third generation of Sorento and they need maybe a little more space,” he says, noting an older Sorento buyer may have teenage kids who are “adult-size persons…and they usually have two or three friends and they have a lot of gear. Those buyers (with teenagers) don’t necessarily want a minivan.”

The Telluride will not be the only utility coming for Kia, as an electric version of the year-old Niro small CUV is due. Kia showed a close-to-production Niro EV at this month’s CES in Las Vegas but officially will not confirm it. However, a KMA spokesman notes it shares a platform with Hyundai’s Ioniq, which offers a battery-electric version alongside the same hybrid and plug-in hybrid variants of the Niro Kia offers.

“I think that the idea of having a ‘normal-looking car’ that happens to be a dedicated hybrid, that gets 50 mpg (4.7 L/100 km) yet still has the utility and seating position of a crossover-type vehicle – it’s a really appealing combination and it has served us well.”

The rush to add utilities, specifically crossovers, is not unusual among U.S. automakers. Light trucks, driven by CUVs, accounted for a record 64.5% of total light-vehicle sales in the U.S. in 2017.

What is unusual is for a brand’s light-truck sales to fall against that backdrop. Kia’s did last year, down 6.9%, which a spokesman puts down to scant inventory of the brand’s Sportage compact CUV and heavy competition for the Sorento.

The spokesman expects Sportage inventory to remain tight this year, due to the vehicle’s growing popularity in Europe and Mexico, with Sorento also in a difficult spot in 2018 due to competitors, as well as what he calls its advanced age. The third-gen Sorento debuted three years ago as a ’16 model.

Last year, the leading sellers in the Sportage and Sorento’s respective segments of Small CUV and Middle CUV were the Hyundai Tucson, with 114,735 deliveries, and the Toyota RAV4, with volume of 407,594, WardsAuto segmentation data shows.

Meanwhile, Kia also is planning announcements soon on a 5-door version of the Forte (it debuted the sedan version of the compact car last week at the Detroit auto show) and a next-generation of its K900 luxury sedan. Hedrick hints the latter will be shown at the New York auto show in late March.