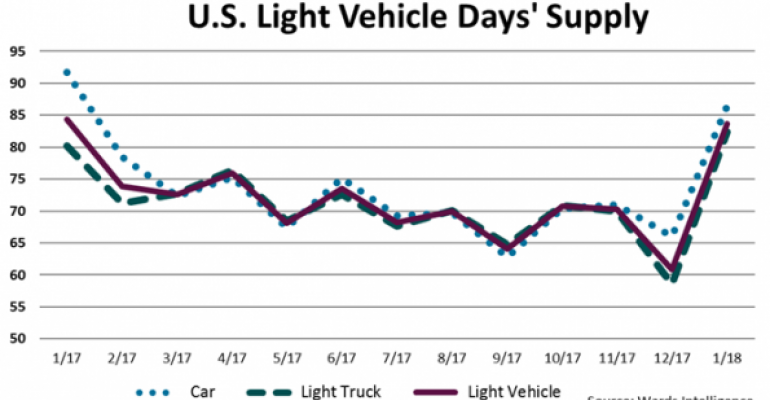 With some exceptions, mostly of redesigned models, big cuts to planned car production remain in the cards.

With January sales volume above year-ago levels, combined with estimated production for the U.S. market dropping from year-ago, inventory continued to decline.

U.S. dealers entered February with stock levels 3.9% below year-ago, widening December’s gap when stocks were 3.6% under the same year-ago total.

Initial modeling for February indicates U.S. LV sales will total a seasonally adjusted annual rate of 17.0 million units, compared with January’s 17.1 million and year-ago’s 17.3 million. At that SAAR, February’s raw volume would fall below year-ago. February’s SAAR will have to total 17.4 million units for volume to increase.

The inventory level borders on the high side when compared with expected demand, but is not outside a manageable range. An optimum January days’ supply is 81-82.

Automakers are building up inventory of CUVs, which posted a record 38.6% sales-market share in January. Dealer inventory of CUVs totaled 1.32 million units, 12.8% above like-2017, and 5.7% above December’s total. By comparison, the industry overall increased 3.0% from December, and less CUVs, the rise was only 1.7%.

The only other segment groups with higher inventory from a year ago were SUV (6.3%), Pickup (3.1%) and Large Car, which accounts for just over 1% of the market and is heavily dependent on fleet demand.

Mostly due to CUVs, import trucks were the spark that lifted days’ supply above the normal level. Not surprising after January demand for import CUVs increased 13.8% from the year before, continuing a trend that lasted throughout 2017.

There will be some offset to the import onslaught with Nissan starting domestic sourcing of the Infiniti QX50 and Subaru just starting U.S. production of the all-new Subaru Ascent.

Although inventory of cars has come down quickly in recent months to get closer in line with demand, the sector likely will be the toughest to keep in balance with sales expected to continue declining while trucks continue to rise. With some exceptions, mostly of redesigned models, big cuts to planned car production remain in the cards.

Inventory of domestically made trucks ended January at 2.05 million units, 4.2% above year-ago. Jan. 31 days’ supply was 85, slightly above year-ago’s 83.