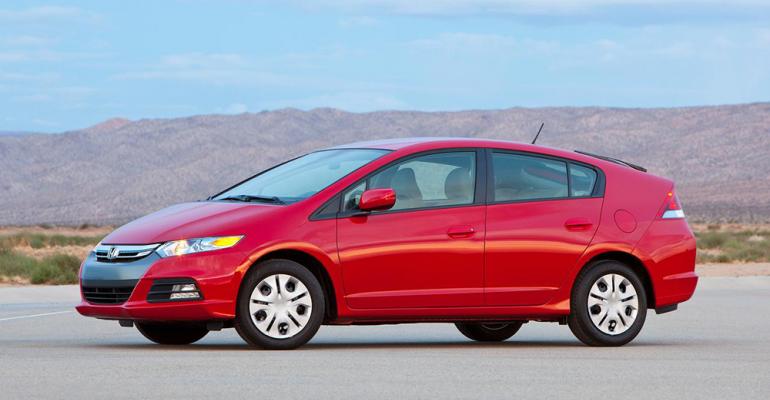 SAN DIEGO – The failure of the Honda Insight hybrid-electric vehicle to sell in higher volumes came down to a lack of promotion.

“We never put a lot of marketing muscle behind (the) Insight,” Jeff Conrad, Honda Div. senior vice president and general manager, tells WardsAuto in an interview here during a ’15 Fit media preview. “We had an initial launch, we spent a few dollars, but then we wanted to grow volume in other places, and that’s where the marketing dollars went.”

Also making the Insight’s path difficult in the hybrid segment was the car being a “new nameplate,” Conrad says. Honda had a first-generation Insight but took a 3-year break from the vehicle until the current model was introduced in spring 2009.

He figures Honda sold many Insights to brand loyalists “but didn’t necessarily draw a lot of conquest business in.”

The Japanese automaker announced last month it will discontinue sales of the car later this year, when production of the ’14 model ends in Japan.

When the second-generation Insight launched, Honda was hopeful the dedicated hybrid could outperform sales of its predecessor, thanks to the move from a 2-seat coupe to a 5-seat hatchback with generous storage space.

Honda is seeing modest sales for its other alternative-powertrain models, although demand is outstripping supply of the new ’14 Accord Hybrid sedan. “There’s a waiting list for the product,” Conrad says.

The car has been the recipient of mostly positive reviews, and it’s those reviews, plus some online advertising, that Honda is relying on to get the word out on the vehicle, as Conrad says the lack of Accord Hybrid inventory prohibits a bigger marketing push.

Some 2,414 Accord hybrids were sold from October of last year through February, with the highest monthly tally, 910, occurring in February.

Honda didn’t publicly announce a sales target for the Accord Hybrid, which achieves 50 mpg (4.7 L/100 km) city, but noted the car sold 6,000 units in its first three months of sale in Japan.

The automaker has said it will expand the use of the Accord’s 2-motor hybrid system in other vehicles, but Conrad is mum on whether the technology will find a home in a third generation of the Insight.

Meanwhile, there is no planned change in the Accord plug-in hybrid’s limited distribution scheme. The car, sold only in California and New York, tallied 577 deliveries from January 2013-February 2014, WardsAuto data shows.

Honda’s other hybrids include the Civic and CR-Z.

The latter has been the subject of speculation it too will be discontinued, but Conrad declines to discuss the future of the sporty 2-seater, which Honda sold 4,550 copies of last year in the U.S.