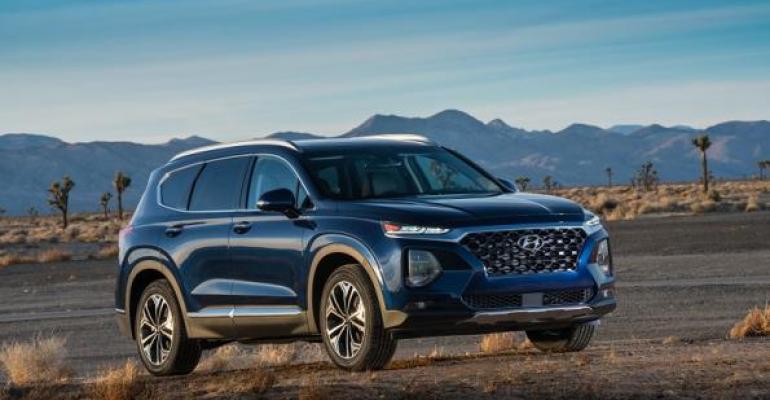 The fourth-generation Santa Fe and new Santa Fe Diesel variant are the third and fourth of eight planned CUVs in the U.S., Hyundai says.

NEW YORK – Hyundai is all about CUVs in New York, as it stages the U.S. debut of the new Santa Fe and Kona electric CUVs, while also showing off a refreshed Tucson.

The brand, which in the U.S. is biased toward car sales, is making a major CUV push to take advantage of the market trend toward light trucks, with eight new or redesigned models due by 2020.

The fourth-generation Santa Fe and new Santa Fe Diesel variant are the third and fourth of those eight planned CUVs, Hyundai says.

The vehicle now wears the brand’s cascading grille and has new front lighting combining LED daytime running lights atop LED headlights. A character line running from headlights to taillights is part of the CUV’s new, more athletic look, as is a so-called “muscular and taut” rear design.

A layered, 3D instrument panel and contrast stitching are some of the premium elements Hyundai says are inside the new Santa Fe. Several ergonomic/comfort changes also have been made, including tilting and repositioning the infotainment screen to reduce glare, a longer, higher center armrest and smaller door map pockets to create more passenger legroom.

All three engines will be mated to a new Hyundai 8-speed automatic, which the automaker says is lighter than the outgoing Santa Fe’s 6-speed auto despite its two extra gears. Extra thrust off the line is promised due to added ratio range at the top and bottom of output speeds. The improved responsiveness is thanks in part to a multi-disc, individually controlled hydraulic channel torque converter.

Major ride-and-handling changes include an upright vs. angled rear shock and an optional self-load-leveling suspension, with the rear suspension tuned for comfort vs. firmness even while trailering.

New safety technology to prevent children and pets from being left behind in rear seats (rear occupant alert) and doors from opening when a vehicle approaches from behind (safe exit assist) is available on the ’19 Santa Fe.

The vehicle still is offered in 2- and 3-row versions, with the Santa Fe Sport name dropped for the 2-row which now is simply known as “Santa Fe.” Three-row versions of the vehicle are renamed Santa Fe XL. Hyundai notes the diesel model can be had with two or three rows of seating.

Infotainment updates for the next-gen CUV include a 5.0 navigation system with Apple CarPlay and Android Auto on upper trim levels, a new 12-speaker Infinity audio system with 11-channel amplifier and an available 8.5-in. (22-cm) head-up display with an aviation-inspired layout.

Meanwhile, Hyundai’s Tucson compact CUV gets several changes for ’19, including a look in step with the new Santa Fe thanks to a cascading grille, headlight/DRL design and changed front and rear fascias. 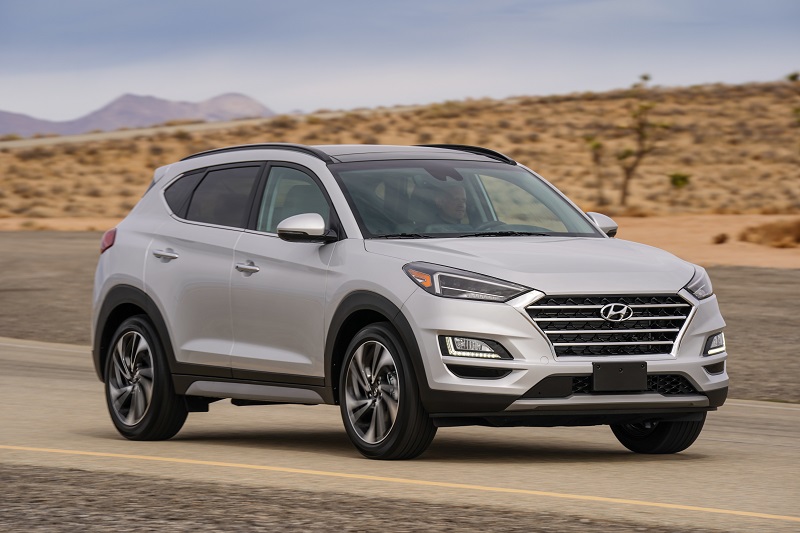 Both engines are mated to a 6-speed automatic.

Several safety and infotainment technologies are standardized for ’19, including forward-collision and lane-keep assist, an electronic parking brake and a 7-in. (18-cm) display audio system with Apple CarPlay and Android Auto.

Hyundai also uses its New York stage to announce details of the U.S.-spec version of the all-electric variant of the new Kona small CUV.

The automaker promises a 250-mile (403-km) range on its fully charged 64-kWh lithium-ion battery pack and a recharging time of nine hours and 35 minutes on a 7.2-kW Level 2 charger and 54 minutes using a 100 kW Level 3 “quick charger.” The Kona has ports for both Level 2 and Level 3 charging as standard.

The 356V battery is liquid cooled, and Hyundai pegs the Kona’s miles-per-gallon equivalent (MPGe) rating at 117, above the Nissan Leaf and Tesla Model X, which respectively are rated at 112 MPGe and 93 MPGe.

The Kona EV features many of the same creature comforts as the conventional Kona, although front styling is changed to reflect the lack of engine cooling needed.

The grille is described as debossed and having a cross-hatch design with integrated charging ports. 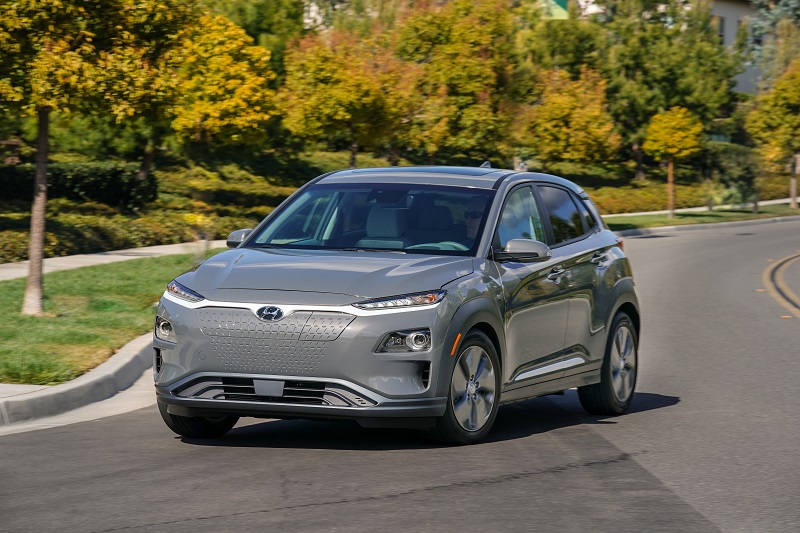 Inside, shift-by-wire controls exclusive to the Kona EV make possible an open-access lower storage bin on the center console.

The Kona EV goes on sale this fall in the U.S., with allotments of the vehicle to California and Northeastern U.S. states that follow California emissions laws.

Through February, Hyundai’s CUV sales were up 16.0% in the U.S. Despite that growth, they were unable to offset the 24.3% decline in car sales, bringing the brand’s total down 12.2%.