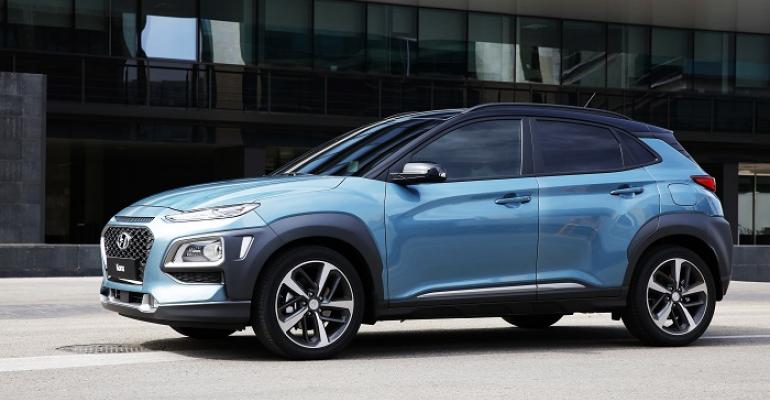 The Korean automaker could use the sales infusion in the U.S. from its new subcompact CUV.&nbsp;

LAS VEGAS – While it is officially slated to go on sale in first-quarter 2018 in the U.S., some Hyundai dealers may get Kona CUVs a bit earlier.

There’s a chance some units will arrive before Jan. 1, Mike O’Brien, vice president-product, digital and corporate planning for Hyundai Motor America, tells WardsAuto here during a  media event for the Accent subcompact.

“I know production will start before the end of the year (for the U.S.),” O’Brien says of the automaker’s new small CUV, which has been on sale since June in Hyundai’s home market of Korea, where it is assembled.

Hyundai’s 2017 U.S. sales could use even the small infusion the Kona could bring to December numbers.

In the absence of a model in the hot subcompact-CUV group, as well as a decline in its bread-and-butter passenger-car sales, Hyundai’s U.S. volume is down 13.1% from like-2016, the biggest drop among automakers in the U.S. this year and ahead of FCA’s 8.5% loss.

In July, O’Brien told WardsAuto Hyundai was cutting back on fleet sales to daily-rental companies due to disagreements with the firms over pricing.

He can’t say whether Hyundai made any sales to daily-rental fleets in October, but HMA notes in a release that total fleet sales fell 23% in the month vs. year-ago, impacting the 11.8% decline in Hyundai’s U.S. sales last month.

“We’re just deciding to stand aside for the time being,” O’Brien says here of daily-rental business, noting Hyundai’s commercial-fleet business still is strong.

While Hyundai said it had its best-ever CUV sales for the month of October this year, with the Tucson and Santa Fe models combining for 21,755 deliveries, the midsize Santa Fe is flat for the year, down 0.8% through October.

With the next-generation Santa Fe due within a year, O’Brien says the advanced age of the current model is having a negative impact, and he acknowledges some dimensional deficiencies for bigger-is-better American car buyers.

“Expect something more suitable for the U.S. market,” he says of the next-generation model.

While the current Santa Fe is available in 2- and 3-row configurations, Hyundai is expected to once again offer a 3-row CUV under a different name, as it did a decade ago when it sold the Veracruz model.

The Tucson, the No.1-selling model in WardsAuto’s Small CUV segment through October, is up 24.7% year-to-date to 91,570 units. Still, O’Brien notes HMA remains frustrated with not having enough supply of the vehicle from its Korean parent.

“We’re still fighting to get more production capacity for the U.S. market,” he says.

Hyundai currently is launching the plug-in-hybrid version of the Ioniq green car, available for order in all 50 states, and later this month the next-generation ’18 Accent subcompact sedan arrives at dealers.

The Accent also has been heavily affected by the drop in daily-rental sales, an HMA spokesman says. Accent sales are down 27.0% to 50,126 deliveries through October.

The next-gen Accent is expected to keep the model’s sales steady, and it remains a more affordable entry point for the brand than an A-segment CUV, which likely would need all-wheel drive, boosting an entry-level-model sticker price, O’Brien says.

“You can’t design two totally different platforms – one that’s just a 2-wheel-drive platform and another that’s an AWD platform,” he says. “So all automakers have one platform that supports AWD and all those components that are ancillary that you don’t see, like front hubs for example, (needing to be beefed up). So the front hub on an AWD car is much more expensive than a front hub on a 2-wheel-drive car, because it’s got to be made for the extra torque handling and so forth.”

Still, HMA has said it is studying an A-segment CUV for the U.S., something boxy and along the lines of sister-brand Kia’s B-segment Soul.

In addition to the Ioniq PHEV, Hyundai is keeping the green-vehicle pipeline flowing with a next-generation Tucson fuel-cell vehicle. Expected to be revealed to U.S. audiences in January at CES in Las Vegas, the model is set to be more widely available than the current Tucson FCV to match the expected increase in hydrogen refueling stations in the U.S.

California is projected to have roughly 40 stations open by year-end, but O’Brien believes the East Coast needs to come online for FCVs to take off as a viable alternative to internal-combustion-engine vehicles.

“That’s frankly a big opportunity for us, so we need to get there as soon as we can,” he says.

Air Liquide, with financial backing from Toyota, has plans to open a dozen stations in New England and the New York area in the next few years. A station in Providence, RI, already is open and another is slated to go live before year-end in Mansfield, MA.

While Hyundai sees fuel cells as the best propulsion choice for long-range driving, it does have a relatively long-range electric vehicle due in Korea next year in the form of the Kona.

“We’re not ready to announce anything yet, but very soon you will hear. Very soon.”

Hyundai and Kia have slated 31 green cars to debut by 2020, although it’s unclear how many of those will be sold in the States.