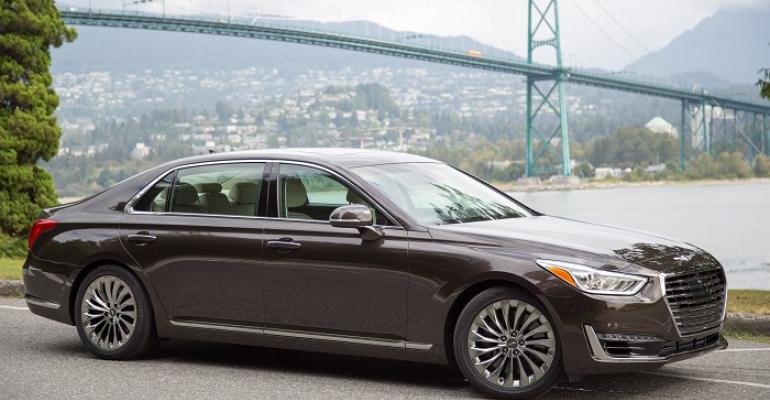 DETROIT – Last year, Hyundai took a big step into the luxury waters with the launch of its stand-alone Genesis brand in the U.S.

And a senior Hyundai executive is guardedly optimistic in light of the early response to the Genesis G80 and G90 sedans.

Noting that the G90 was the runner-up in the North American Car of the Year award, Mike O’Brien, vice president-product planning for Hyundai Motor America, says the model had a “good launch…our dealers can’t get enough of them.”

In 2016, the automaker sold 6,166 G80s and 782 G90s in the U.S., the former a refreshed version of the Hyundai Genesis mid-large sedan and the latter a replacement for the Hyundai Equus fullsize 4-door.

A lack of a luxury CUV could impact Genesis, however. The brand isn’t set to launch what it has described as BMW X3 and X5 competitors until close to 2020.

O’Brien says those forecasting a dip in the luxury segment are doing so because of a lack of CUVs.

“While forecasters are projecting a small decline, when we really study it, it is not so much a decline in demand as lack of CUV options,” he says. “There simply aren’t enough of them in the market whether you’re buying a GMC Denali or BMW X5. Thus some luxury customers are migrating out of the segment.”

Hyundai is bullish on CUVs this year for its namesake brand, but guardedly optimistic about the market as a whole.

O’Brien predicts light-vehicle sales will fall slightly to 17.1 million units this year, down from 2016 levels of 17.5 million, but expects the CUV segment to continue to grow as consumers shift from midsize cars.

“Even though the basic fundamentals of the economy are strong, there will be pressure on the market in 2017,” he says. “Building up inventories and incentives cannot continue unabated. Delinquencies are going up slightly. It’s going to be a bit harder.”

CUVs continue to be the miracle segment, he says, noting they are catching up to cars in many respects.

“If you go to a Ford store and see a Fusion or to Toyota or Honda dealership and see a Camry or Accord, you can buy an Escape, RAV4 or CR-V for the same money,” he says. “Customers (also) see more versatility and capability. In addition, CUVs are now approaching the same fuel economy, drivability and quietness.”

CUVs accounted for 32.2% of light-vehicle sales in the U.S. in 2016, up nearly 8% from the previous year, WardsAuto data shows.

Hyundai, which traditionally has sold an 80/20 mix of cars and light trucks in the U.S., last year achieved a 72/28 ratio. Its U.S. leadership has been vocal about increasing CUV sales and offerings. The brand is developing a subcompact CUV to take on the Honda HR-V that is expected to launch in the U.S. later this year.

While not disclosing a 2017 U.S. sales forecast, O’Brien nevertheless expects deliveries to grow from last year’s record level of 775,005 units, including both Hyundai and Genesis models.

Its top sellers were the Elantra and Sonata sedans and the Santa Fe and Tuscon CUVs. Together they accounted for 81% of Hyundai’s 2016 U.S. volume.

While the Elantra, Sonata and Santa Fe are built at either the automaker’s Montgomery, AL, plant or sister brand Kia’s West Point, GA, plant, Hyundai does import the Tucson CUV from Ulsan, South Korea.

O’Brien says he needs more capacity to meet demand for the compact CUV, but stops short of making any announcements. Tucson sales rose 41.1% last year to 89,713.

Besides luxury, another segment where Hyundai seeks to make a bigger splash is alternative powertrain.

It retails hybrid and plug-in hybrid versions of the Sonata, but next week it will launch U.S. sales of its new Ioniq hybrid and all-electric cars. O’Brien is bullish on their potential.

“Our focus was on developing a great compact car that happens to be electrified,” he says. “There were around 1.1 million buyers who shopped for an EV last year, but because of cost or maintenance or durability...or that they felt the car was too underpowered…they didn’t buy one.

“We are offering a no-excuse electrified vehicle that measures up to compact vehicles in the segment,” he says, noting a full marketing launch for the cars begins in March.

Sales targets are not being announced for the Ioniq lineup, which includes a plug-in hybrid due on sale in September. HMA’s former CEO Dave Zuchowski told WardsAuto last year the cars may need to be incentivized sooner than later due to low fuel prices in the U.S. that have hampered green-car sales.

“With gas at $2 a gallon there isn’t much natural demand for an alternative-fuel vehicle that’s going to generate terrific mileage,” he said in March.

However, O’Brien says Hyundai “will wait to see how the market receives the cars.”

The Ioniq hybrid is expected to sell the best of all three variants, thanks to having the highest fuel economy of any vehicle sold in North America without a plug – 58 mpg (4.0 L/100 km). “Which is 2 mpg (0.9 km/L) higher than (Toyota’s) Prius. And the Prius, as you know, is in its fourth generation,” he says.

However, O’Brien says Hyundai’s target market is neither the Prius nor other hybrid and electrified vehicle owners. “That’s not enough to make a business case.”

By 2020, Hyundai will have five hybrids, four plug-in hybrids, four EVs and one fuel-cell vehicle on the market. It already leases its Tucson FCV on a limited basis in California.