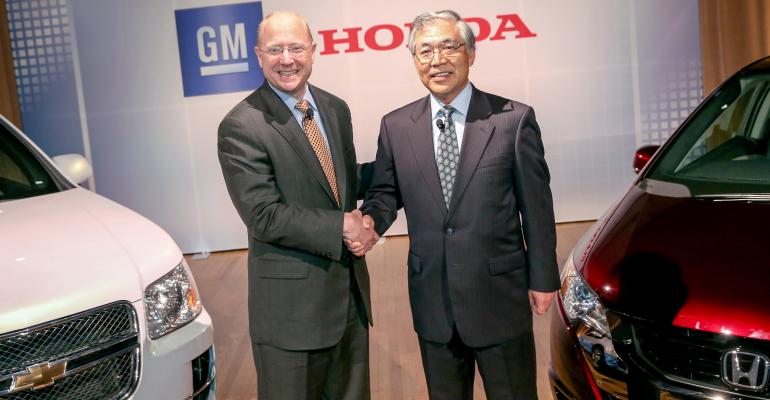 In 2017, California&rsquo;s emissions rules will change and FCVs will carry the traveling credits automakers use to remain 50-state compliant. The rule change could lead to a shift in OEM capital investment.

Mounting regulatory pressures spearheaded by the State of California could push automakers to spend billions of dollars more on fuel cell electric vehicles, and perhaps gravitate away from the battery-powered cars helping them achieve compliance today.

“That’s one way of playing the game of credits,” Fiat Chrysler powertrain chief Bob Lee tells WardsAuto. “I’m pretty sure everyone is looking at (FCVs).”

Automakers such as FCA use battery-electric cars to achieve tailpipe emissions compliance in California, and OEMs can use a portion of those credits toward meeting emissions laws in other states that have adopted similar standards tougher than federal rules.

But in 2017, California’s emissions regulations will change and FCVs, not BEVs, will carry the so-called “traveling credits” automakers use to remain compliant. It could lead to a shift in automaker investment away from batteries to fuel cells.

FCA officials say FCV technology is “on their radar,” but the automaker does not appear entirely committed.

Lee told journalists and Wall Street analysts at the company’s annual investor day earlier this year the technology remains commercially unviable despite California’s tightening regulations, which call for 15% of an automaker’s sales in 2025 to be a zero-emissions vehicle.

VW rolled out the Golf Sportwagen Hymotion FCV concept at the Los Angeles auto show last week, but like the Audi A7 Sportback h-tron FCV also breaking cover there it will not see daylight until buyers and a fueling infrastructure are in place.

“But when there’s demand, all we have to do is throw the switch,” says Heinz-Jakub Neusser, head of product development at VW.

Other automakers, however, have doubled down on fuel cells in recent months.

Ford, Daimler and Renault-Nissan are working together on FCVs, while Toyota and BMW have tied up on development. At the Los Angeles auto show, Toyota revealed the Mirai FCV it plans to sell and lease in California late next year. The Japanese automaker’s new interest in FCVs, coupled with a wind-down of its partnership with BEV maker Tesla, signals a clear break from the battery-propulsion strategy it had been pursuing.

“The longer-term intention is to sell fuel cells for a long time, expand it out of California as the infrastructure grows,” Bill Fay, group vice president-Toyota Div., tells WardsAuto.

General Motors and Honda, two long-time FCV researchers, most recently announced collaboration on a long-term program to develop hydrogen-fuel-cell systems and storage units with the goal of bringing the technology to market, originally targeting the 2020 timeframe.

But Honda announced earlier this month it will start selling a new FCV to replace the FCX Clarity next year in Japan, and sales of the vehicle in Europe and the U.S. will follow on a timetable the automaker has not disclosed. The agreement with GM called for the Detroit automaker to bring an FCV to the U.S. market after Honda.

Hyundai Gets Out Front

Hyundai launched its Tucson FCV in California this summer. The plan is to get 60 units into the market by the end of the year and ramp up production further if demand emerges.

“Someone has to be first,” says John Juriga, director-powertrain at Hyundai-Kia America. “That’s what we look at – Hyundai taking that step out and being the first with a fully commercial fuel-cell vehicle. Others will follow.”

But demand will not emerge naturally, experts agree. Like the BEVs that came before them, regulations forcing automakers to produce the cars will spur sales.

According to WardsAuto data, sales of BEVs and PHEVs have grown from 675 units in 2009 to 97,563 in 2013. Over the same period, the U.S. and California enacted historic tailpipe emissions regulations with juicy incentives for automakers to produce them.

And while plug-in sales so far this year are up 27% to 99,351, they remain a fraction of industry sales. Sales of FCVs are even more meager, with the FCX Clarity recording one sale in the year’s first 10 months. Since the FCX hit the market, 78 units have been sold, far short of Honda’s projections.

California’s credits for BEV sales will not go away in 2017. But sources tell WardsAuto the state likely will rebalance allocation of the credits, which today factor in items such as how long the battery of particular EV takes to recharge.

Some see the change throwing favor toward FCEVs, although California rulemaking veteran Roland Hwang says the state’s goal is zero emissions regardless of the technology.

“California is agnostic to either technology,” says Hwang, director of transportation programs at the Natural Resources Defense Council and former air pollution engineer for the California Air Resources Board. “Regulations are designed to be neutral.”

But if automakers faced a steep curve on the deployment of BEVs, FCEVs could sprain their necks.

Miles of progress has been made in recent years toward shrinking the fuel-cell stack, where hydrogen and oxygen mix to create electricity to propel the cars. Automakers also appear to have solved the range and hydrogen-storage dilemma, going with compressed hydrogen tanks for nearly 300 miles (483 km) of range without robbing interior space.

However, massive cost issues still confront the technology. Hyundai leases the Tucson for $499 a month after a $2,999 down payment. Owners get the car for three years, or 36,000 miles (57,936). It is widely assumed Hyundai sells the Tucson FCV at a loss, with experts suggesting the cars cost about 10 times more than a conventional vehicle.

Then there is the question of a refueling infrastructure, which remains minuscule.

Whereas BEVs offer the ease of home-charging and a rapidly expanding public network in many urban areas, California is home to most of the nation’s hydrogen refueling points and fewer than 10 currently exist in the state. A number of others are under construction and the state projects having 100 in the next decade.

To market the Tucson, Hyundai includes fuel in the monthly payment. Lessees can refuel at any public hydrogen station in California.

A big push is on in the Northeast, too, where states following California emissions rules want to populate urban areas such as New York, Boston and Hartford with refueling points to support upwards of 205,000 FCVs by 2025. Just one site exists today in Connecticut.

The Northeast represents a key market for FCVs, because the technology is especially efficient in larger vehicles, such as trucks, CUVs and SUVs employing all-wheel drive. Batteries struggle as the vehicle gets bigger and are asked to turn additional wheels.

“There will be a lot of hydrogen fueling stations added in California, and the East Coast also is very interested in getting that capability,” Juriga says.

Toyota said when it announced the Mirai it would collaborate with Air Liquide of France on 12 hydrogen stations for Connecticut, Massachusetts, New Jersey, New York and Rhode Island.

“It’s CARB,” he says, adding, “Also the (population) density is there.”

But California alone wants 1.4 million ZEVs and PHEVs on its roads by 2025, and its regulations will compel automakers to put a large share of FCVs in the mix.

“We need both (BEVs and FCVs) for a number of reasons, and one is competition,” Hwang says. “They will push each other (and) right now we are seeing a healthy competition between the two technologies.”

– with Christie Schweinsberg and David E. Zoia in Los Angeles