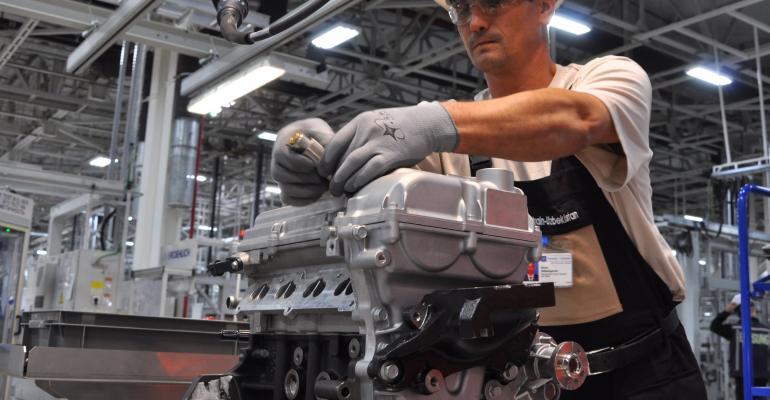 Rustam Kadyrov, head of strategic planning for UzAvtosanoat, says particular attention will be paid to production of a new low-cost flagship sedan aimed at both domestic and foreign markets.

GM Uzbekistan, a joint venture between the Uzbek government, local automaker UzAvtosanoat and General Motors, plans a wide-ranging expansion and renewal of its product range within the next several years.

Rustam Kadyrov, head of strategic planning for UzAvtosanoat, says particular attention will be paid to production of a new low-cost flagship sedan aimed at both domestic and foreign markets. The new car, which probably will be produced under the Ravon brand, is expected to be priced no higher than $10,000.

Planned production capacities are not disclosed, although GM Uzbekistan sources say they could reach 100,000 cars annually and ensure profitability.

One of GM Uzbekistan’s main export markets will be Russia, where it wants the new model to compete against Lada cars, especially that country’s best-selling sedan, the flagship Lada Granta, which is produced by local automaker AvtoVaz.

GM Uzbekistan also plans to localize production of at least three crossovers at the Uzbek JV, particularly the Equinox, Trailblazer and Traverse.

The largest of those facilities is the Asaka plant, which employs about 8,000 workers and has the capacity to produce 250,000 vehicles a year. The combined capacity of the other two production sites, located in the cities of Pitnak and Tashkent, is just 50,000.

GM Uzbekistan also plans a significant increase of exports this year, targeting $118.6 million in value terms compared to $25.5 million in 2018.

The automaker has held recent talks with authorities in Russia’s Samara and St. Petersburg regions over launching production at local facilities. In the latter case, GM Uzbekistan is interested in the GM Russia plant at St. Petersburg, which has been closed since March 2015. GM still has not sold that factory, as talks with contract assembler Unison, a major bidder, have stalled.

GM Uzbekistan was founded in 1996 by the Uzbek government and South Korean automaker Daewoo, and initially was known as Uz-DaewooAuto. Following Daewoo’s acquisition by GM, the JV was renamed GM Uzbekistan in 2008 and continued building Uz-Daewoo-branded vehicles. Those models now are sold as Chevrolets.

The Uzbek government owns UzAvtosanoat and has a 75% stake in the GM Uzbekistan JV, while GM holds the remaining 25%.