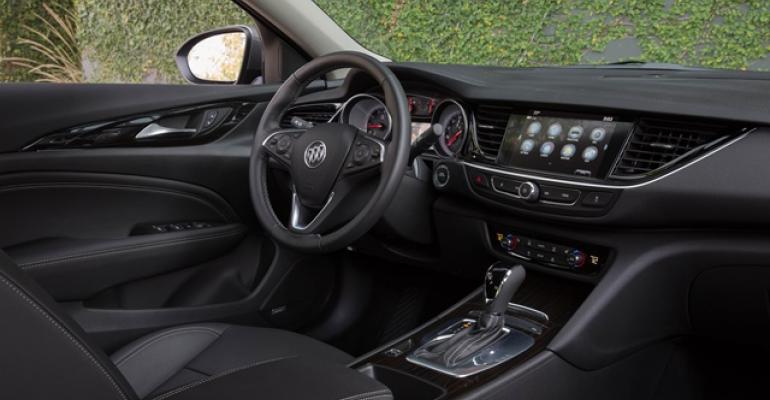 AUSTIN, TX – Don’t knock it until you try it, General Motors tells critics of its newly launched Marketplace shopping platform.

“We wouldn’t do anything to jeopardize anyone’s safety,” says Phil Brook, vice president-U.S. sales and marketing at Buick-GMC, which along with GM’s Chevrolet and Cadillac brands will populate 4 million cars and trucks from the automaker with Marketplace via over-the-air updates in the coming weeks.

Marketplace will appear on every GM vehicle with a Wi-Fi hotspot and an infotainment screen from the ’17 model year and beyond. The app is an icon located on the infotainment screen, and after it is launched drivers can shop retailers such as Starbucks or Dunkin’ Donuts for their regular choices from behind the wheel. Food orders also can be made at merchants such as Wing Stop and Applebee’s, and drivers can search for hotels and begin the reservation process.

But critics of the technology say it will contribute to distracted driving, which was a factor in 3,477 U.S. vehicle-related fatalities in 2015, according to the latest available data from NHTSA.

“With motor vehicle deaths rising, the last thing we want to do is offer drivers another way to be distracted,” says Debbie Hersman, president and CEO of the National Safety Council, a U.S. safety advocate.

“Hands-free systems are not safer – the research is clear on this. We need to find ways to protect drivers – not expose them to more unnecessary risk,” she says in a statement to WardsAuto.

Brook says Marketplace underwent lengthy validation before GM chose to roll it out.

“It’s really just a matter of understanding how Marketplace works,” he adds, calling it easier to navigate while driving than many audio systems.

GM launched Marketplace with hopes of getting a piece of the $57 billion on-demand economy.

Brook does not say whether the current Marketplace technology eventually will operate through voice controls, as many vehicle functions do today. Experts say the spoken word is expected to operate more features in the future as voice-recognition systems improve.

“As time goes by, things will become more streamlined and integrated,” he says.

Brook also reports the redesigned Buick Enclave and Enclave Avenir are off to a promising start. The 7-passenger luxury crossovers launched last month. They are the brand’s flagship products and the Avenir model, which adds exclusive styling and content much like Denali models do at Buick sister-brand GMC, is all-new to the lineup.

Enclave U.S. sales nearly doubled in November to 6,584 units from 3,508 in the same period last year, although the surge in demand included a sell-down of ’17 models to make room on dealer lots for the remade version.

“It’s encouraging so far and good to see Avenir off to a great start,” he says, noting the special trim line accounts for 30% of early sales. “In fact, we may have underestimated (Avenir) demand and that’s a good thing.”

GM hopes the ’18 Regal SportBack, driven by media here for the first time, enjoys the same reception. The sixth-generation sports sedan adds a rear hatch, which opens up 60.7 cu.-ft. (1,719 L) of storage space with the rear seats folded.

It is powered by a 2.0L turbocharged 4-cyl. delivering 260 hp and 295 lb.-ft. (400 Nm) of torque linked to either an 8-speed or 9-speed automatic transmission. Standard models employ front-wheel drive, while twin-clutch all-wheel drive is optional. Pricing starts at $25,915.

The SportBack has been released to dealers along with the wagon-like Regal TourX crossover. A higher-performance Regal GS boasting a 310-hp V-6 arrives from the lineup’s Russelsheim, Germany, assembly plant in the coming weeks.

The models represent a clear break from the Regal’s 4-door heritage and join a relatively small club of sportbacks in the U.S., including the Audi A5 Sportback and BMW 4-Series Grand Coupe.

“There’s not much risk at all,” Brook says of the new body styles. “The market moves on. There’s a bigger risk if you don’t push the envelope. We did not want to come to market with a me-too product.”

Looking at December sales, Brook says the truck-centric GMC brand is seeing good customer activity in a month that started softly but is expected to close with its traditional flourish of sales after the Dec. 25 holiday. Buick will need to catch up in the closing days, he says.

After two consecutive years of Super Bowl advertising, Buick will not buy a spot in television’s biggest and most expensive night of programming. But the brand will be back headlining the national college basketball tournament March 11-April 2.

“I can guarantee if you’re watching the tournament, you’ll see a lot of Buick,” Brook says.