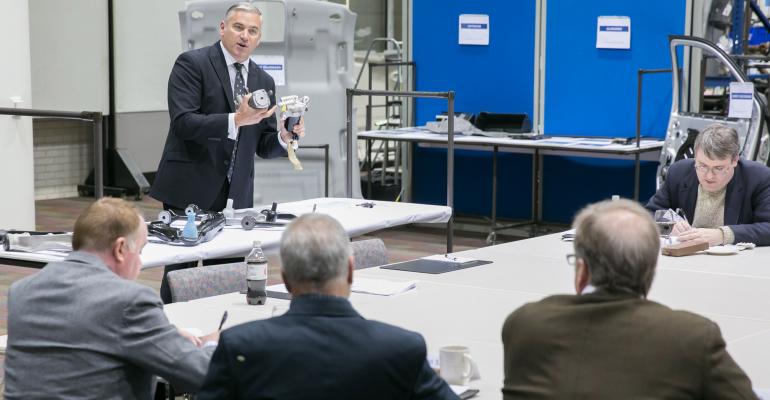 WARREN, MI – General Motors in the next 18-24 months will put out for bid “hundreds of billions of dollars’ worth” of new parts-supply contracts, the automaker’s purchasing chief says, and he wants suppliers to bring their best ideas to him in return for longer, more profitable terms.

“We want to be the OEM of choice,” says Steve Kiefer, vice president-Global Purchasing and Supply Chain at GM. “We want to be the first stop when (suppliers) think of a new innovation. We want them to bring that to General Motors.”

The flood of new contracts comes as GM turns over product programs and launches all-new vehicles in its biggest product offensive since bankruptcy.

But while the automaker enjoys its greatest financial health in decades to fuel the offensive, it lacks sound relations with suppliers after years of demanding cut-rate pricing, missing on sales forecasts for products and refusing to share on cost savings. As a result, suppliers have shopped many of their best ideas to GM competitors.

Kiefer, like his predecessors Grace Lieblein and Bob Socia, desperately wants to change that dynamic at a time when consumer-pleasing innovations are flowing from parts makers more rapidly than ever.

Among key pieces of bait Kiefer intends to employ is a new strategic sourcing process, where suppliers are brought on board before a product program begins. And, perhaps even more importantly, the automaker is newly willing to offer multiple-generation contracts, which can expand a supplier’s profitability on a program from millions to billions of dollars.

GM’s rivals, such as supplier-relations leaders Toyota and Honda, often use open-ended contracts.

“We look at our suppliers as long-term partners,” says Victor Vanov, a Toyota manufacturing spokesman.

Says Kiefer: “The risk for the supplier is reduced, and they are able to bring their best ideas.”

GM, as Kiefer readily admits, has not been a go-to automaker for suppliers. The poor relations date back to the Jose Ignacio Lopez era of the 1990s when GM tried to remedy its shaky finances by draconian cost-cutting in the supplier sector.

It resulted in a decades-long hangover for GM, reflected in consistently poor grades in a closely watched supplier-relations study from Planning Perspectives. The Birmingham, MI-based consultant will release the annual report again in the coming weeks.

Last year, GM finished last among the Big Six automakers producing in the U.S. The study also estimated the automaker could increase its profitability by $400 million if its supplier relations improved 10%.

The report’s author, John Henke, told WardsAuto last year that while suppliers have heard the appeal for better relations from Kiefer and other GM executives, it never filtered down to the front lines, where the automaker’s buyers meet face-to-face with parts makers to hammer out contracts. Negotiations often can be bare-knuckle affairs.

Kiefer says GM since has ironed out those issues, using Planning Perspectives data and its own research to determine which commodity-buying groups are successful and unsuccessful.

“The data is quite clear and we’ve learned a lot,” Kiefer tells WardsAuto during a roundtable with journalists at the automaker’s tear-down facility here in the heart of its R&D campus.

One issue, Kiefer says, has been turnover at the buyer level. In some cases it has led to inexperienced buyers. “That has driven some friction, because perhaps we didn’t have the most-trained people at the point of interface.”

But the bigger issue, he adds, might be GM’s complexity and overly bullish volume forecasts. Complexity will decline as GM moves its vehicles to modular platforms and engine architectures, where more parts and parts groups are shared between vehicles and powertrains. That way, robust sales of one vehicle can make up for lower demand for another.

“When you miss on volumes, you are going to create a supplier issues,” he says. “That has been the biggest issue. When, as a supplier, you invest for 1 million cars and you get 800,000 of them, somebody is going to lose and all the smiles and greatest relationships in the world will not fix that.

“Being more conservative is a bad approach,” he adds. “There are losses associated with that. Being accurate is the right approach.”

As the former head of Delphi’s powertrain operations, Kiefer, who shifted to purchasing from the top seat at GM Powertrain in November, knows intimately the perils of selling parts to the automaker. Although GM never was his top customer while at Delphi, he recalls thinking, “If GM would only do ‘X,’ I could save them millions of dollars.”

Now Kiefer has his chance to listen, which he does through regular meetings with a 30-member supplier council and a newly formed Innovation Council, where the latest ideas from suppliers are given the once-over by GM executives. He says he also spends time chatting one-on-one with the CEOs of key suppliers, an approach that recently removed bottlenecks in the pipeline of key parts to GM’s hot-selling large pickups and SUVs.

The approach also has yielded tremendous savings for GM. By working more collaboratively with suppliers in recent months, the automaker has removed from the supply chain waste caused by overly complex and unreliable parts.

For example, a poor injector design for GM engines forced a supplier into a complex manufacturing process. The automaker and the supplier worked up a redesign that resulted in a less-expensive, higher-quality parts saving $15.5 million annually.

“It’s not just about taking price out, it’s about improving quality,” Kiefer says.

A recent redesign for the control arm for GM’s large pickups and SUVs, which saw the supplier proposing a shift from cast iron to stamped steel yielded $19 million in annual savings, as well as a 21-lb. (9.4-kg) reduction in the part’s weight. The weight savings led to another $13 million in annual distribution costs.

For suppliers, a successful contract with GM could send their profitability into the stratosphere.

The automaker spends an estimated $90 billion on parts with 20,000 suppliers to produce more than 10 million vehicles annually. On the logistics side, an often overlooked piece of GM purchasing, the automaker ships 2 billion parts every month from 10,000 supplier manufacturing locations and 180 distribution centers.

“Nobody in the world has the scale opportunities of General Motors,” Kiefer says.

As for opportunities for new suppliers hoping to get in the door at GM, Kiefer says it will be difficult but not impossible.

“Bring it on,” he says. “We are trying to be very open. It’s not going to be easy if you don’t have some history with us. There is a portion of the supply base that will remain stable, but we are leaving some room for the entrepreneurs and startups and we’re having some success.”

Kiefer says opportunities are particularly good for minority-led suppliers and suppliers in fields outside of hard parts, such as construction and packaging.

Japanese Rebound in Supplier Survey, Widen Gap With Detroit
May 12, 2014