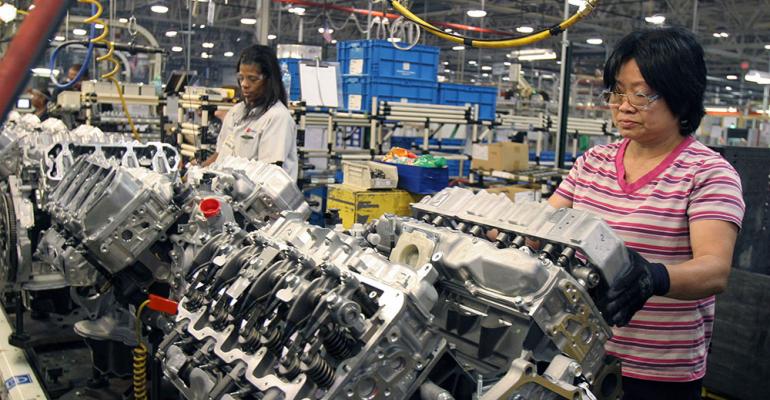 Investment in the 6.6L turbodiesel V-8 will meet the EPA&rsquo;s &ldquo;Tier 3&rdquo; tailpipe and evaporative emissions standard coming in 2017 for light-, medium- and some heavy-duty vehicles.

The 6.6L Duramax turbo diesel V-8, produced at DMAX in Moraine, OH, since 2000, appears in the Chevrolet Silverado and GMC Sierra Heavy Duty pickups, as well as the Chevy Express and GMC Savana large vans.

“Today’s announcement demonstrates GM’s commitment to continuously invest in technologies that reduce the impact of our vehicles on the environment, while maintaining performance attributes required by customers in the areas of towing and hauling loads,” GM North America Manufacturing Manager Christine Sitek says in a statement.

According to GM, the design changes will meet the EPA’s “Tier 3” tailpipe and evaporative emissions standard coming in 2017 for light-, medium- and some heavy-duty vehicles. The federal law mirrors a new standard on the way from California regulators, also due in 2017. Connecticut already has instituted tougher regulations on this front.

The new federal standard was encouraged by automakers, because it allows them to outfit vehicles with the same powertrains and emissions standards in every state.

The Duramax diesel currently produced by DMAX generates 397 hp at 3,000 rpm and 765 lb.-ft. (1,037 Nm) of torque at 1,600 rpm. The engine uses high-pressure (30,000 psi/2,000 bar) Piezo injectors to balance efficiency with the performance demands of customers who use the big GM pickups and vans for towing and hauling.

DMAX has built nearly1.6 million engines since it launched production. GM owns 60% of the JV.

Future fuel-economy and emissions standards are driving automakers to diversify their lineups with diesel technology.

GM last year introduced the Chevy Cruze Clean Turbo Diesel, powered by a 2.0L turbodiesel homologated for the U.S. from Europe. The automaker also has had on the shelf for a number of years a Duramax 4.5L V-8 turbodiesel designed for use in its half-ton trucks, SUVs and CUVs and recently signaled it may begin development on it again soon.

Chrysler this week begins selling a version of its Ram 1500 light-duty pickup with a 3.0L turbodiesel engine. Nissan plans a diesel engine for its next Titan pickup.

Today’s announcement from GM comes ahead of additional powertrain news expected from the automaker next month. Sources tell WardsAuto the automaker will reveal a new small engine for global application.