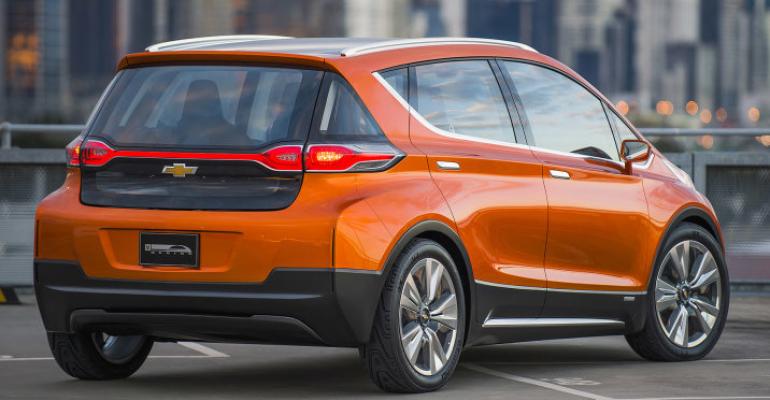 GM Exec Confirms Bolt to Be Built at Michigan Plant

GM North America President Alan Batey says the automaker will invest $200 million to bring out the Bolt, $160 million in tooling and equipment and $40 million for new dies at its Pontiac Metal Center facilities.

Speaking at a Midwest Automotive Media Assn. event to open the media preview of the Chicago auto show, Batey says GM will invest $200 million to bring out the Bolt, $160 million for tooling and equipment at Orion and $40 million for new dies at the automaker’s nearby Pontiac Metal Center facilities.

The Bolt will be based on the concept unveiled last month at the North American International Auto Show in Detroit.

“The message from consumers about the Bolt EV concept was clear and unequivocal: Build it,” Batey says. “We are moving quickly because of its potential to completely shake up the status quo for electric vehicles.”

Leveraging the industry-leading battery technology found in the Chevrolet Volt and Spark plug-in EVs, Batey says the Bolt EV concept was developed as a long-range all-electric vehicle for all 50 states, designed to offer more than a GM-estimated 200 miles (320 km) of range at a target price of about $30,000.

The concept vehicle features selectable driving modes for preferred driving styles, such as daily commuting, and is designed to support DC fast charging.

Batey says start of production and additional details will be announced later. He does not mention how many would be built.

The Bolt will join the Volt plug-in Chevy’s lineup. The second-generation ’16 Volt goes on sale later this year and is built at GM's Detroit-Hamtramck Assembly Plant.

“We’re proud that Chevrolet has decided to produce the Bolt EV here in Michigan,” Gov. Rick Snyder says. “Michigan unquestionably remains the global automotive leader. Chevrolet is tapping a skilled workforce that includes some of the most talented and hard-working people in the world for this cutting-edge vehicle. Chevrolet is an important part of our state’s automotive history, and Michigan-made products like the Bolt EV point to a bright future as well.”

“This is very exciting for our members who were facing the possibility of losing that plant during the auto crisis,” says UAW Vice President Cindy Estrada, director of the union’s GM Dept. “Our members are also proud to have their plant chosen to produce what is sure to be another popular and dynamic Chevy product.”

In a scrum with media following his speech, Batey is pressed on the number of Bolts that will be produced, but he declines to provide a number.

He also is asked about a production startup date, saying only that Bolt “is on a fast track” and GM hopes to introduce the production model “as quickly as we can.”

Asked about published reports the target date was the 2017 model year, he replies, “You didn't hear that from me.”

In an interview following his speech, Batey says GM looked at a variety of plants to build the new Bolt, including Hamtramck.

“In the timeframe we had to bring Bolt out when we wanted and at the capacity we needed, we decided on Orion because it would allow us to move faster, and we want to be first with a 200-mile range electric car,” he says.

Batey won’t say whether Bolt volumes will be more or less than the Volt. He also declines to say how many workers might be added at Orion to handle Bolt production.

“Like volume and production date, that’s one of those more-still-to-come things,” he says of boosting worker count.

“It’s too early for numbers. It’s unprecedented to just introduce a concept in Detroit at the auto show and then confirm production here a month later.

“So there’s more (details) to come. But we are going to move at a quick pace and think with a range of 200 miles Bolt addresses range anxiety in electrics and at price of about $30,000 we’ve hit the sweet spot.”

Asked about the potential impact of marketing an electric now that gas has gone from $4 to $2 a gallon, Batey responds, “Our philosophy is not to have all our eggs in one basket, but to have economy cars to fullsize trucks, vehicles that cover a variety of segments to cover a variety of circumstances that are out of our control, like gas prices.

“This is a cyclical business, and we have to be able to address the height and the depth of any cycle. I can’t predict when gas prices will go up again, but our forecast is that any rise would be modest through 2015.”