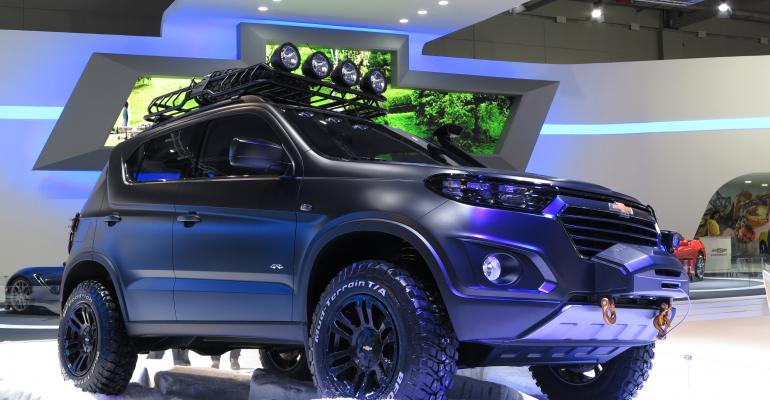 GM reportedly plans to resume sales of its entire Chevrolet range in Russia (Aveo, Captiva, Cruze and Lacetti) that virtually ended when the automaker shut down its plant in St. Petersburg last year. The automaker disputes the news.

General Motors denies there are bigger plans for the brand in the country.

Russian and Kazakh media reports quote a government spokesman and sources close to GM saying Russian sales of the entire Chevrolet range (Aveo, Captiva, Cruze and Lacetti) could resume by the end of the year.

GM continues selling big-ticket Cadillacs and certain low-volume Chevrolets, such as the Corvette, Camaro and Tahoe, but the automaker stopped selling mainstream models in Russia when it shut down its assembly plant in St. Petersburg last year. It also ended production and sales of Opel models locally when it shuttered the St. Petersburg operation.

The returning range of Chevys will be built at the Asia Avto plant in Kazakhstan, the reports say, which has a contract-assembly deal with the U.S. automaker. The plant currently builds Lada, Kia and Skoda cars.

GM says it is untrue. “The information reported regarding Chevrolet resuming sales of its full range of products in Russia is untrue,” the automaker says in statement to WardsAuto. “There are no plans to resume sales of our full Chevrolet model lineup in Russia.”

Jenis Kasymbek, the Minister for Investments and Development of Kazakhstan, is quoted as saying Asia Auto will begin exporting cars to Russia later this year and aims to raise annual capacity to up to 200,000 units a year, with Chevrolet cars accounting for a significant portion of production.

Because both Russia and Kazakhstan are members of the Customs Union (a single-market economic and political union of Eurasian countries), GM would have an opportunity to supply Chevrolets to Russia without customs duties and most other fees.

However, Russian Industry and Trade Minister Denis Manturov says last year’s pullback significantly damaged the brand’s reputation, and Chevrolet would have considerable ground to make up in the country.

The Russian Association of Auto Dealers takes a more sanguine view, calling criticism by Manturov and others exaggerated and unfounded, citing the brand’s competitive pricing that made it popular with buyers.

The dealer group reportedly anticipates about 30,000 sales during the first year of the marque’s return to Russia, with Hyundai and Kia models expected as major competitors. Chevrolet would distribute cars in Russia through the Asia Auto dealer network, reports say.

GM also is preparing to introduce the Niva compact SUV to the Russian market after obtaining a loan from Sberbank, Russia’s largest state-owned bank, to build a new assembly plant.

The vehicle will be built at the GM-AvtoVAZ joint venture’s Togliatti factory in the Samara region, 400 miles (640 km) southeast of Moscow. The JV is developing a production schedule of up to five years, AvtoVAZ President Nicolas Maure says.

GM-AvtoVAZ says the new-gen Niva will contain a high level of localization and will attract domestic parts suppliers. The project as planned includes a car-body assembly facility and a new engineering and logistics center.

GM-AvtoVAZ displayed a new Niva concept at the 2014 Moscow auto show. But Russia’s developing financial crisis, marked by the ruble’s falling value and the effects of Western economic sanctions, prompted the JV to indefinitely suspend the project.