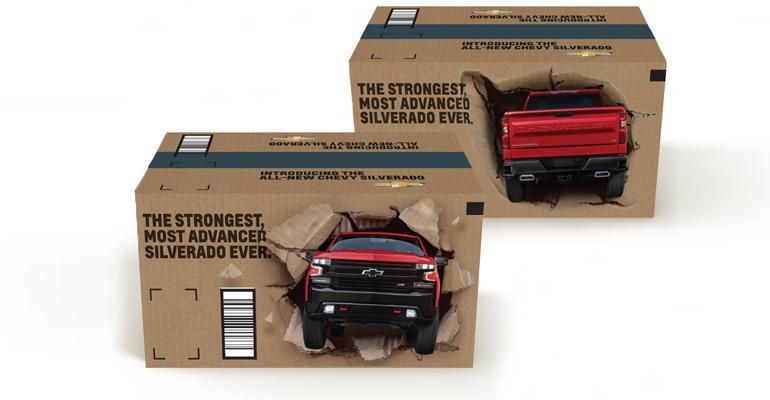 GM does not release what it will spend on television, print, digital, outdoor and direct-to-consumer, but Chevy advertising chief Paul Edwards admits “It will be significant.”

ROYAL OAK, MI – There’s never been a better time to be in the truck business and General Motors this year expects to take full advantage of America’s thirst for pickups, SUVs and crossovers, led by the marketing launch of the redesigned ’19 Chevrolet Silverado.

A new-generation Silverado advertising campaign always breaks the bank, but this one in today’s market dynamic with Chevy executives boasting of all-time brand health is unprecedented in scale and reach.

GM does not release what it will spend on television, print, digital, outdoor and direct-to-consumer ads, but Chevy advertising chief Paul Edwards admits “It will be significant.”

How significant? Consider this: A Silverado ad will appear on the cover of Bon Appetit, a monthly foodie magazine that is no stranger to slick luxury-car and SUV promotions but a place where a brawny fullsize pickup historically isn’t front-page material.

The Silverado also will appear on the ubiquitous Amazon box and GM went so far as to employ neuroscience to determine if its ad concepts had legs. Yes, the Detroit automaker outfitted 500 truck owners and potential truck buyers with electrodes to draw the person’s level of response to its early advertising concepts.

“It gives us an opportunity to validate our research,” Edwards says on the sidelines of an event showcasing the Silverado ad blitz, which begins with a 60-second commercial during the Jan. 7 college football championship.

The first commercial, called “A Little Bit Country, A Little Bit Rock N Roll,” extends Chevy’s 4-year-old “Real People, Not Actors” brand campaign by using everyday people to suggest the pickup’s widening buyer demographic. The music strays from the original song but uses its lyrics to poetic affect and captures core pickup customers at work along with non-traditional buyers, or so-called switchers Chevy wants to court in a market where trucks now account for more than 70% of U.S. sales.

More commercials will follow, leaning on a hard-working, hard-playing theme and each includes a Spanish-language counterpart for the Hispanic market, where Chevy wants to play more deeply.

“Hispanic is 20% of the market and it continues to grow,” says Edwards, U.S. vice president-Chevy Advertising.

Edwards thinks the timing for a Silverado-size ad blitz is ripe, given the headway the Chevy brand recently has made in elevating its consumer opinion and transaction prices, according to GM metrics.

“Our success over the last four years has been based on consistently telling the quality story, where we had a perception gap with most consumers, coupled with persistent, consistent product news,” he tells Wards, pointing to the launch campaigns backing Cruze, Malibu, Equinox, Traverse and now Silverado.

“It’s been that combination of building the Chevy brand at the bowtie level and continuing to beat the drum on an individual model level,” he says.

Non-traditional buyers are gravitating to trucks, including pickups, because they now have levels of technology and comfort previously reserved for cars.

“And (trucks) offer you all of this freedom and, really, unlimited potential in terms of a fullsize pickup,” he says. “What we see from that switcher audience is they are slightly younger, slightly more urban and slightly more diverse. It’s a good companion to the core audience.”

The product pipeline is full, too, says Brian Sweeney, U.S. vice president-Chevy. Production of crew-cab models began in the third quarter of last year and output widened to double-cab and 4-cyl. models in the fourth quarter. The first quarter will see regular-cab output ramp up and the automaker’s second light-duty pickup assembly plant in Silao, Guanajuato, Mexico, has begun production of the new Silverado.

The Silverado recently eclipsed a 50% mix of ’19 models. GM plans to continue limited production of ’18 models into the third quarter at its Oshawa, ON, Canada, facility. GM’s Flint, MI, assembly plant was building a handful of the previous-generation light-duty pickups each week but has shifted its focus entirely to heavy-duty models. The ’20 Chevy Silverado 2500HD launches later this year.