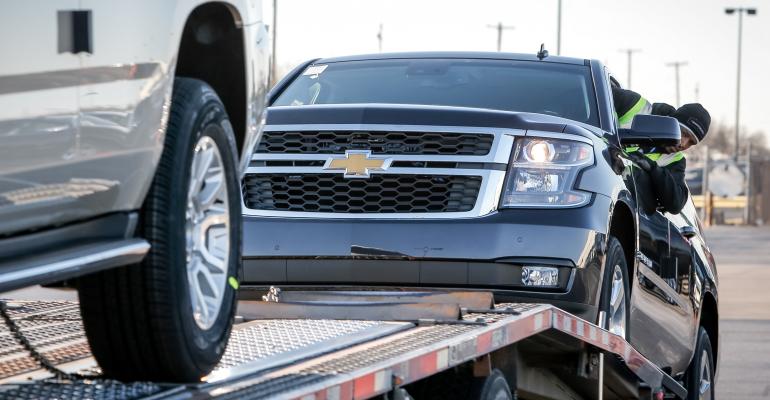 The automaker will build an estimated 941,000 units in the October-December period, compared with 826,500 year-ago, according to WardsAuto data.

Light-vehicle inventories of major U.S. automakers hit a record high in October as industry sales have crested, prompting production cuts at many key players except for General Motors. The Detroit automaker is on track to build 13.9% more cars and trucks in the fourth quarter than it did in the same period last year, and executives insist company planners are not overly bullish.

Stevens recently told journalists and Wall Street analysts GM’s production dynamic is a result of filling in product holes the automaker had a year ago with vehicles such as the Cadillac CT6 large sedan. He says output also is increasing because GM wants to fill out compact CUV supplies before retooling manufacturing sites for refreshed models in 2017.

Last year at this time GM’s Spring Hill, TN, assembly plant was down to prepare for output of the Cadillac XT5 and GMC Acadia midsize CUVs, which launched as all-new products in February and April of this year.

San Luis Potosi, Mexico was dark in December 2015 for modifications, presumably to prepare for launch of the new Chevy Equinox and GMC Terrain midsize CUVs beginning next year, while Lordstown, OH, was idle in December ahead of production of the redesigned Chevy Cruze compact car.

GM stopped reporting its production forecast three years ago for competitive reasons, so while Stevens remains coy over its output plan he does confirm the uptick in activity.

October’s industry inventory of 3.841 million units was 7.4% higher than last year and topped a previous high of 3.803 million in October 2004. Looking ahead, the 76-days’ supply would be appropriate for the 17.5 million-unit seasonally adjusted annual selling rate over the past three months. But truck stocks are relatively heavy at 1.941 million units, leading some industry analysts to believe more discounts could be coming.

Stevens suggests recently aggressive incentive activity by some truck makers could continue to help pare inventory of pickups and SUVs, but says GM plans to keep spiffs in check to preserve profitability.

“We believe we are well positioned,” he says. “We have dominant share in fullsize SUVs and our fullsize pickups continue to perform very well.”

GM says its October incentive spending, as percentage of the automaker’s average transaction price, was below the industry average of 11.8% at 11.7% and down 1.4 percentage points from September.