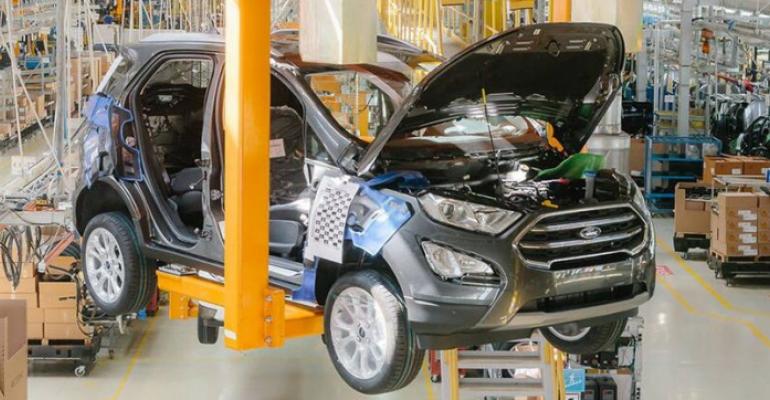 Ford Europe Chairman Stephen Armstrong says the company is in talks with several unnamed global automakers interested in one or both of its car factories, which are located in the republic of Tatarstan and in a suburb of St. Petersburg.

ST. PETERSBURG – Ford shuts down production at two of its three Russian plants and begins looking for buyers for the facilities after paying off a loan.

The amount of the debt repaid by Ford and its joint-venture partner Sollers to the state-owned VEB bank is not disclosed. VEB loaned RR39 billion ($629 million) to the JV in 2011.

Ford Europe Chairman Stephen Armstrong said during the recent St. Petersburg International Economic Forum that the company is in talks with several unnamed global automakers interested in one or both of its car factories, which are located in Naberezhnye Chelny in the republic of Tatarstan, 400 miles (640 km) east of Moscow, and in Vsevolozhsk, a suburb of St. Petersburg.

Some auto-industry analysts estimate the value of the Naberezhnye Chelny plant at RR5 billion ($75 million). According to Russian media reports, negotiations to sell the plant to a Tatarstan company, such as Russia’s flagship truck maker  KAMAZ, were not successful.

The Vsevolozhsk facility could be more attractive to potential buyers, however, because of its proximity to St. Petersburg, Russia’s largest seaport.

According to sources in the St. Petersburg regional government, potential bidders for the Vsevolozhsk plant could include Volkswagen and Hyundai. Neither automaker would comment.

Meanwhile, Ford will not sell its third plant in Russia in Elabuga which, like Naberezhnye Chelny, is located in Tatarstan. Ford has established a new joint venture with Sollers and the Russian company will have a controlling stake in the JV, which will assemble Ford Transit vans.

Sollers is receiving tax incentives under a special investment contract signed June 7 with the Russian Ministry of Industry and Trade.

Ford hopes to avoid a situation like that facing U.S. rival General Motors, which has been trying to sell its St. Petersburg-area plant for almost four years. A tentative agreement to sell the plant to Belarus automaker Unison, which planned to build cars for Chinese companies, was reached in October 2018 but has not been finalized.