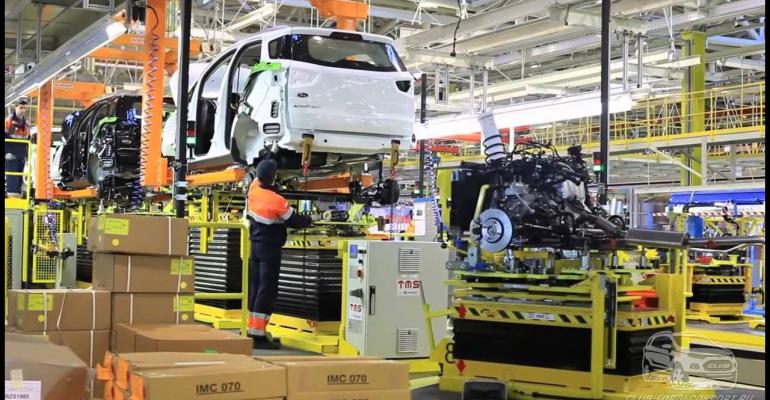 EcoSport among Ford models being discontinued in Russia.
Industry News

Ford Transit light-commercial vehicles will continue to be produced at the Elabuga plant under the management of Russian automaker Sollers, which will receive a 51% stake in what now is a 50-50 JV with Ford.

Ford Sollers, a joint venture between Ford and Russian automaker Sollers, announces it will stop producing Ford-branded cars in Russia by the end of June.

The company says it will close assembly plants in Naberezhnye Chelny and Vsevolozhsk, and an engine factory in Elabuga. Ford Transit light-commercial vehicles will continue to be produced in Elabuga under the management of Sollers, which will receive a controlling stake in the restructured JV.

Ford says it will fulfill its obligations to the 3,700 Ford Sollers employees. It is not known how many will keep their jobs. Ford also will continue to honor warranties on its passenger cars sold in Russia. The country’s fleet of Ford cars is estimated at 1.4 million.

Analysts say Ford has struggled because it lacks a low-cost model in the Russian market. They also note that, unlike other foreign automakers, Ford has done little to expand its product lineup and lost customers to rival brands when it raised prices, particularly for its flagship Focus model.

Ford opened a dealership in Moscow in 1992, shortly after the collapse of the Soviet Union.  The Vsevolozhsk plant near St. Petersburg it opened a decade later was the first in Russia to specialize in the production of foreign cars.

The Vsevolozhsk factory alone had the capacity to manufacture about 25,000 cars per year, but Ford’s total production in Russia in 2018 was just 15,345 units, down 21.4% year-on-year, Wards Intelligence data shows.

Ford’s most popular product in Russia has been the Focus subcompact, which had a backlog of orders stretching back more than a year when it went into production at Vsevolozhsk. The plant was expanded and was running on three shifts in 2003, when the Focus became the country’s best-selling foreign model.

The Focus maintained its position until 2014, when sales plummeted industrywide as Russia fell into an economic crisis from which it has not fully recovered.